Overview of the GBP/USD pair. October 5. What impact will Nonfarm Payrolls have on the dollar this time? 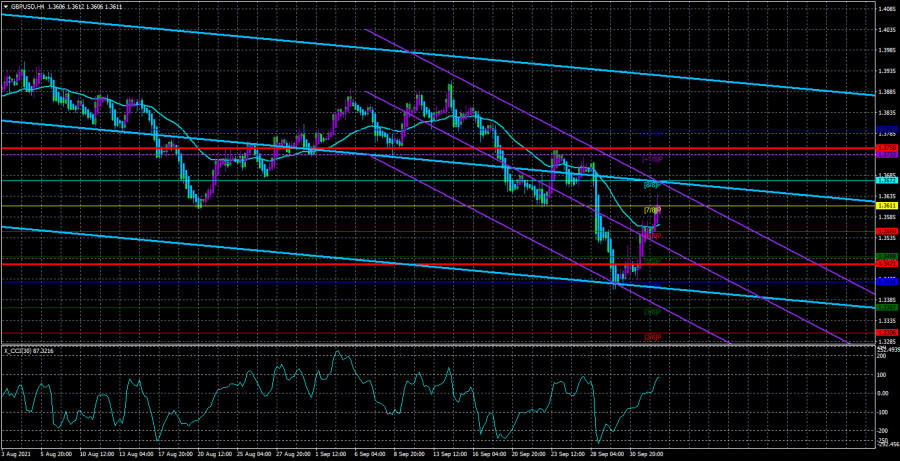 The British pound, paired with the US dollar, continues to recover fairly quickly after falling last week. Earlier articles have already said that the "fuel crisis" can provoke a fairly strong fall. However, at the same time, markets usually recover very quickly after them. In reality, we see that this is what is happening now with the British pound. The pound began its decline from the level of 1.3700, and yesterday it recovered to 1.3600. Thus, the issue of changing the short-term trend for the pair is now being resolved. If the price is firmly fixed above the moving average and does not go below it in the coming days, we will expect a new upward trend. We have already outlined why it will be extremely difficult for the dollar to continue showing growth in the euro/dollar article. In short, the US currency currently has no real support from the fundamental background. All recent purchases of the US currency by the market were associated with expectations of the curtailment of the QE program in the US, and last week the pound also came under pressure when the "fuel crisis" broke out in the UK. But there are no reasons for the dollar to continue growing now as there were none before. And in general, if we look at the 24-hour timeframe, we will see that the US dollar is not growing against the pound. In relation to the entire upward trend, the dollar managed to win back only 23.6% of the Fibonacci correction from the British currency. It is a meager correction. It just looks like a fairly powerful downward movement on a 4-hour timeframe.

Let's go back to this week's events in the UK and the USA. On Monday, no interesting messages were received at the disposal of traders. Thus, during the day, the markets had nothing to react to. Nevertheless, a fairly strong upward movement continued anyway, confirming our hypothesis that the markets will very quickly return the pound to its original positions. This week, in principle, there will be a minimal number of important events and macroeconomic publications. By and large, all the most interesting events will happen on Friday, when the Nonfarm Payrolls report will be published in the States. Recall that the latest Nonfarm report was quite disappointing, as the number of jobs created in the non-agricultural sector decreased to 243 thousand. For two months in a row until August, the figure was almost 1 million new jobs. Thus, in September, traders are waiting for the growth of this indicator, but it is not the growth itself that is important to us, but the correspondence of the actual value to the forecast value. At the moment, experts' forecasts indicate an increase of 500 thousand by the end of September. However, if the actual value is lower than the forecast, the US dollar may fall quite heavily against the euro and the pound. If the forecast is exceeded, then the US currency may return to growth.

Also, the markets are now well aware that the lower the Friday Nonfarm rates are, the lower the chances of announcing the beginning of the QE program curtailment in November. Jerome Powell, who spoke regularly last week, made it clear several times that the labor market is still very far from its pre-crisis levels. And, recall, the QE program is now aimed precisely at restoring the labor market since inflation has long since exceeded the target 2% and is now at 5.3%. Thus, inflation is no longer a concern for the Fed representatives, but the labor market is.

The "fuel crisis" in the UK is most likely already fully worked out by the markets, so it is unlikely that the pound will experience any more difficulties because of this. Consequently, the dollar is deprived of another factor that could support it in the short term. Therefore, with a high probability, the growth of the pound/dollar pair will continue this week. 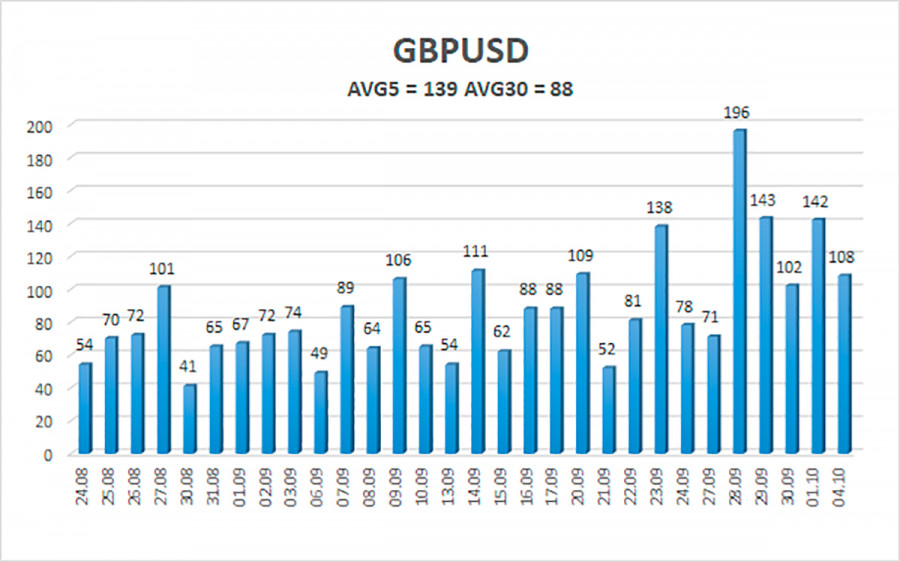 The average volatility of the GBP/USD pair is currently 139 points per day. For the pound/dollar pair, this value is "high." On Tuesday, October 5, we expect movement inside the channel, limited by the levels of 1.3471 and 1.3750. The upward reversal of the Heiken Ashi indicator signals a possible resumption of the downward movement.

The GBP/USD pair continues to move up on the 4-hour timeframe and has overcome the moving average. Thus, at this time, it is necessary to keep open long positions with targets of 1.3672 and 1.3733 levels until the Heiken Ashi indicator turns down. Sell orders should be considered again if the price is fixed below the moving average with targets of 1.3489 and 1.3428 and keep them open until the Heiken Ashi turns up.

Interesting? Write a comment below.
 Overview of the GBP/USD pair. October 5. What impact will Nonfarm Payrolls have on the dollar this time?
Forward 
Backward 