Overview of the GBP/USD pair. October 8. The "fuel" and "logistics" crises in the UK continue. 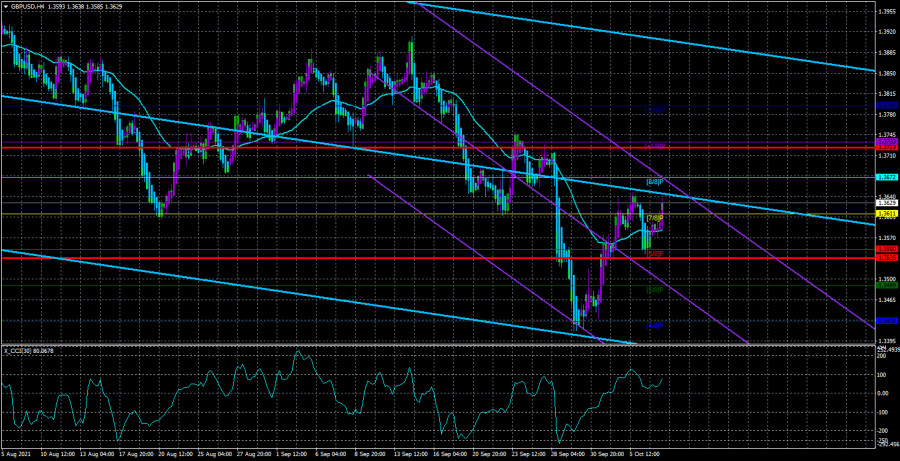 The GBP/USD currency pair has already managed to gain a foothold above the moving average this week, then below the moving average, and now it is at the stage of deciding where to move next. The entire last round of the pair's movement was provoked first by the emergence of a "fuel crisis" and then by messages from the British government about its resolution. However, as it became known this week, the crisis is still very far from being resolved, and the "fuel crisis" is part of a larger "logistical crisis." Thus, the British pound may soon rush down again, as the "logistical crisis" may begin to develop in a different direction. Many different important topics in the foreign exchange market can influence different currencies to one degree or another. For example, the European currency has been in a very weak (but very stable) downward movement for more than a month. But the pound, although also in a downward trend, is quite often adjusted, and its volatility is an order of magnitude higher than that of the euro. Thus, once again: at this time, various currencies are presumably influenced by various factors, of which there is quite a large number.

As we have already said in the article on the euro/dollar, the US dollar can grow at this time not only based on market expectations about the curtailment of QE already in November. Also, some experts suggest that the world is on the verge of a new financial crisis, "the trigger has already been cocked," and it remains only to wait for its descent. Thus, the US currency may be in demand at this time and as a reserve currency. And in addition, the pound may be under pressure due to the "logistical crisis" in the UK.

It is noteworthy that the fuel shortage story was not just resolved and left behind. It took a new turn because the invitations of the British government for truckers from abroad responded - 27 people. Thus, far-reaching plans to overcome the "fuel crisis" by attracting drivers from EU countries on temporary visas may not come true. Recall that earlier, we have already noted the unwillingness of European drivers to go to Britain "for a couple of months" to save the British from their problems and then go home since the country only issues temporary work visas. Many migrant workers prefer to immediately go to work in those countries where they will not be deported in a few months and where it is much easier to get to than to the UK. Thus, the "fuel crisis" may indeed persist until Christmas. At least, this is the opinion of fuel retailers, who are already predicting further delays in the delivery of fuel to gas stations. Thus, the most realistic way to solve this problem now is to involve the military and continue to deliver fuel to all regions of the country. For example, this Monday, the Association of Gasoline Merchants said that about 20% of gas stations in London and its environs were left without fuel. At the same time, Boris Johnson said that the fuel shortage was formed not because of a shortage of drivers but because of the growing demand for it. In part, the British Prime Minister is right since there has been a shortage of drivers since the very beginning of 2021. And according to the same Johnson, there was such a problem before Brexit. However, earlier, it was somehow solved. It was also solved for nine months of 2021, and the critical situation developed only at the beginning of October-month. Thus, the main thing now for the British is to calm down and stop refueling for the future, emptying all the gas stations available to them.

What can we expect from the British currency in the near future? On the one hand, there have been no global changes in the fundamental background in recent weeks. In principle, the same process of falling continues, which for the pound/dollar pair began on June 1. Considering that the pair has adjusted by only 33% against the global upward trend, the drop in quotes may continue with a target of 1.3160 (38.2% Fibonacci level). We support the growth of the dollar in the current conditions, but for this, the price must be located below the moving average. 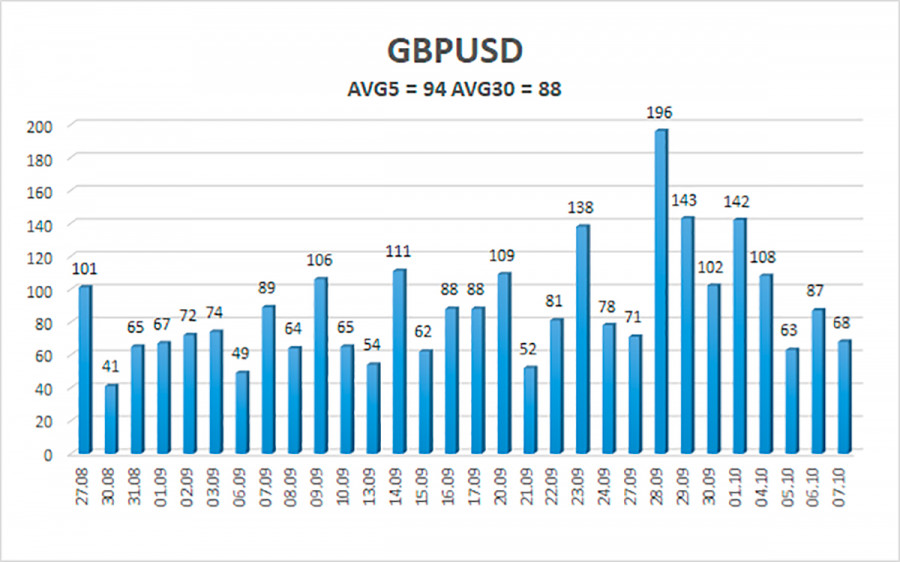 The average volatility of the GBP/USD pair is currently 94 points per day. For the pound/dollar pair, this value is "average." On Friday, October 8, we expect movement inside the channel, limited by the levels of 1.3535 and 1.3723. The reversal of the Heiken Ashi indicator downwards signals a possible new round of corrective movement.

The GBP/USD pair on the 4-hour timeframe has consolidated back above the moving average. Thus, at this time, it is necessary to keep open long positions with targets of 1.3672 and 1.3723 levels until the Heiken Ashi indicator turns down. Sell orders should be considered again if the price is fixed below the moving average with targets of 1.3550 and 1.3489 and keep them open until the Heiken Ashi turns upwards.

Interesting? Write a comment below.
 Overview of the GBP/USD pair. October 8. The "fuel" and "logistics" crises in the UK continue.
Forward 
Backward 