S&P 500 has renewed its all-time high 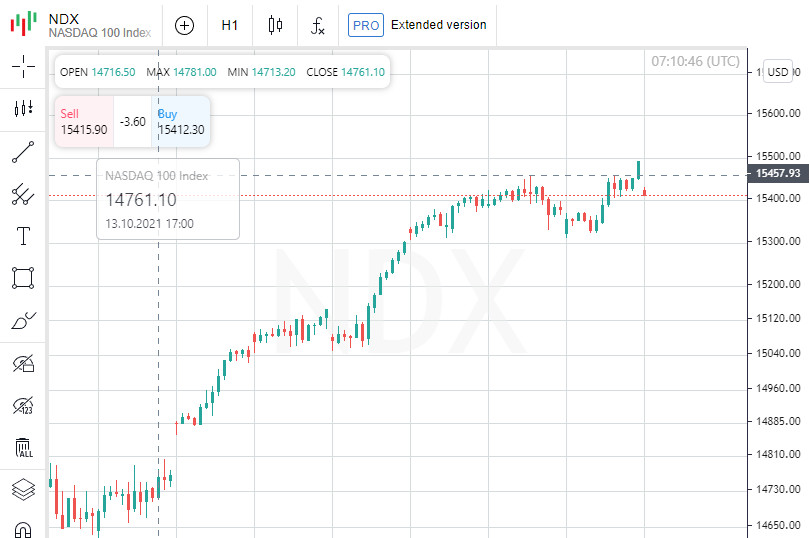 Investors continue to monitor the third quarter's corporate earnings season, as well as assess the potential impact of the White House's attempts to raise corporate taxes. Already published the results of about 70 companies whose shares are included in the calculation of the S&P 500. Profits in 86% of cases turned out to be better than the consensus.

The index of manufacturing activity in Philadelphia in October fell to 23.8 points compared with 30.7 points a month earlier. Experts expected a less significant drop in the indicator calculated by the Federal Reserve Bank of Philadelphia, that is, up to 25 points. A negative value of the index indicates a weakening of activity in the manufacturing sector of the region, a positive value indicates an increase.

The index of leading economic indicators in the United States in September rose by only 0.2%, according to the research organization Conference Board, which calculates this indicator. In August, the rise was 0.8%. The Conference Board index shows the expected development of the country's economy in the next 3-6 months. It is calculated on the basis of ten key economic indicators, seven of which are known even before the publication of the indicator.

US existing home sales rose 7% in September to 6.29 million homes on an annualized basis, the highest since January, the National Association of Realtors (NAR) said in a report. Experts surveyed by Trading Economics predicted an average increase of 3.6%.

Meanwhile, the number of applications for unemployment benefits in the United States has updated the minimum since the beginning of the pandemic. The number of Americans applying for benefits for the first time fell by 6,000 last week to 290,000, according to a report by the US Department of Labor. At the same time, analysts on average expected an increase to 300 thousand.

International Business Machines slightly increased revenue in July-September, but the result was worse than expected. The company's shares fell 9.6% in the trading session, becoming the leader of the decline among the Dow Jones.

Chemical company Dow Inc. achieved a profitable level in the third quarter, with adjusted numbers and revenues above analyst expectations. Nevertheless, its shares lost 1.05% in price.

In addition, among the components of the Dow Jones index, shares of Chevron Corp., American Express Co. fell by 1% or more. and Caterpillar.

Southwest Airlines Co. returned to profitable levels in the third quarter and increased revenue better than expected. However, the airline's shares were down 1.6%.

Telecommunications company AT&T Inc., one of the largest in the country, more than doubled its net profit in the last quarter, but its revenue fell due to the spin-off. Its securities fell 0.6%.

At the same time, the cost of HP Inc. jumped 6.9%. The personal computer and printer company has significantly raised its annual dividend and also improved its profit forecast for the next fiscal year.