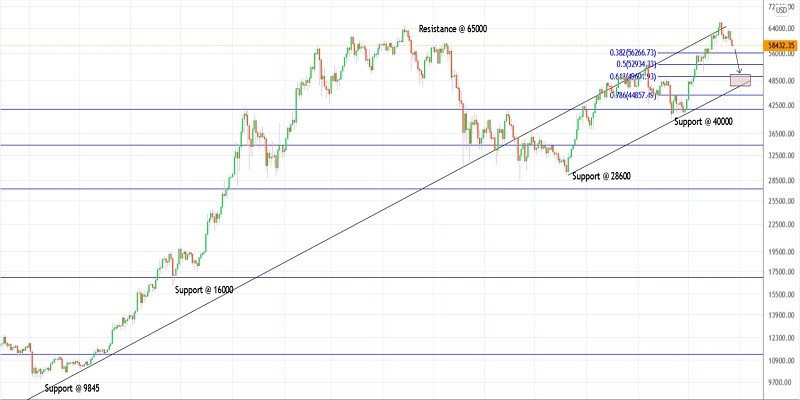 Bitcoin corrective drop gathers momentum as prices slip below $58,500 on Thursday early hours of trade. The crypto currency is looking poised to drop towards $56,200 levels at least, as discussed earlier. Traders might be inclined to hold short positions and reduce risk to break even now, with potential target toward $56,200 and lower.

Bitcoin might be drifting toward the channel support, which is seen around $50,000 mark highlighted in a rectangle box on the daily chart. Also note that the Fibonacci 0.618 retracement of the rally between $40,000 and $67,000 is seen passing through $49,000-50,000 mark as well. High probability remains for a bullish bounce if prices manage to drop there.

The overall structure still remains bullish until prices stay above $40,000 initial support. The recent drop from $67,000 can be still defined as corrective before bulls are back in control again. On the flip side, if channel support breaks, it would be considered as bearish for the crypto as prices could drag through $40,000 levels going forward.