Trading plan for the GBP/USD pair for the week of October 25 - 29. New COT (Commitments of Traders) report. The pound continues 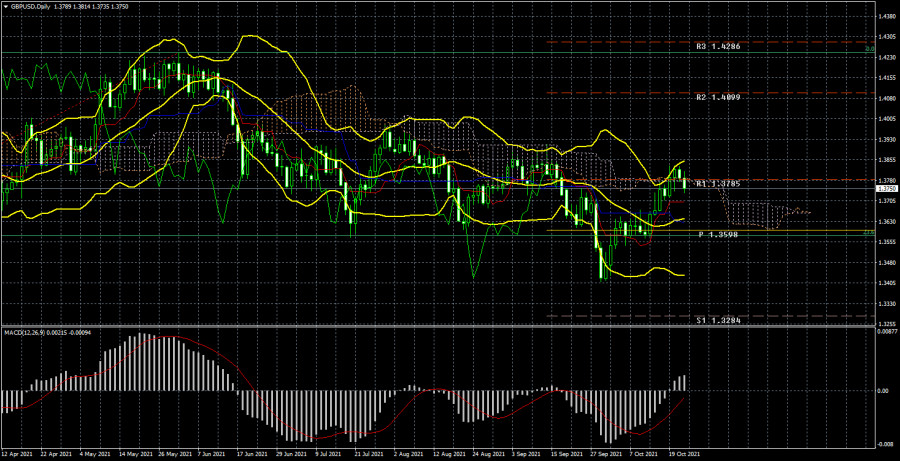 The GBP/USD currency pair continues to trade as confusing as possible. A vivid example of this was last week when the quotes reached the Senkou Span B line, from which they had previously bounced twice and overcame it. However, on Thursday and Friday, they fell back below it. As a result, it is completely unclear what it was. Either the price broke through this line and will now continue to move up after a slight pullback down, or it was a false breakdown, and now the pair will begin a new round of downward movement. We also draw the attention of traders to the overall technical picture. Although the downward trend seems to continue, corrections within its framework are quite deep and frequent. It cannot be concluded that there is now a classic downward trend. But over the past six months, the pound/dollar has managed with great difficulty to work out the 23.6% Fibonacci level, built along with the entire upward trend over the past year and a half. Recall that the euro has adjusted by almost 50% over the same time. And this is although the pound has much more reasons for falling than the euro. Everything is relatively calm in the European Union now. But in the UK, there are a lot of such topics that should put pressure on the pound. Even if fundamental global factors are in the first place now, such as the injection of huge sums into the economy by central banks, it is reasonable to assume that the euro and the pound would have to move about the same. But the pound has grown by 2,700 points over the past year and a half, and the euro by 1,800. The pound has adjusted by about 30% and the euro - by almost 50%. The pound is moving more or less actively, and the euro is at minimal volatility. Thus, now the movements of both pairs cannot be called clear and predictable. But this applies to the pound to a greater extent. 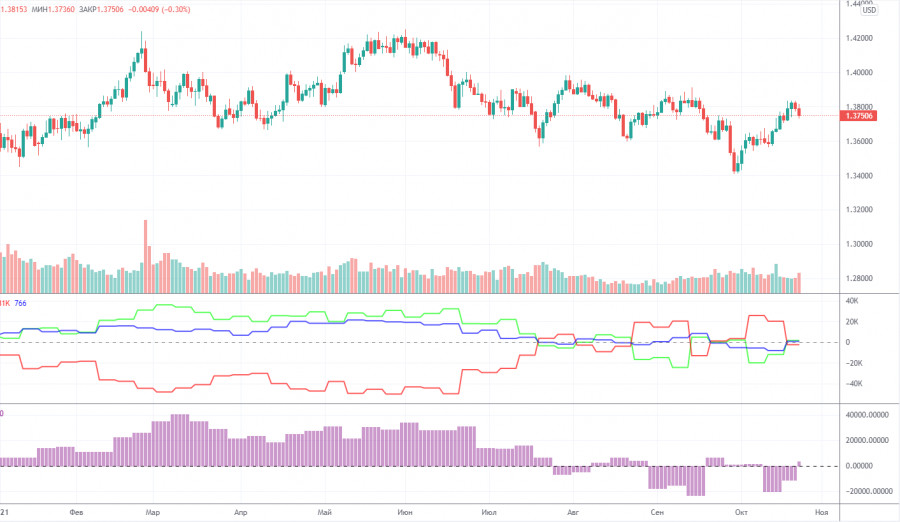 During the last reporting week (October 18-22), the mood of professional traders again became less "bearish." The situation with COT reports is even more ambiguous now than with the technical picture. And if we compare the COT reports on the euro and the pound, the situation becomes even more strange. Both indicators in the illustration above show no clear, accurate, and understandable mood among the major players right now. Therefore, it is simply not possible to make any forecasts based on COT reports now. In principle, the illustration above clearly shows the entire movement of the pair over the past year. It's quite difficult to call it a trend or even a trend. In the last couple of months, the mood of the major players has constantly been changing. The green and red lines of the first indicator (the net positions of the "Commercial" and "Non-commercial" groups of traders) constantly change the direction of movement. It means that the two largest groups of traders are constantly increasing and reducing net positions. During the reporting week, professional traders opened 2,000 buy contracts and closed 12.5 thousand sell contracts. Thus, their net position increased by 10.5 thousand contracts. It corresponds to what has been happening with the pound in recent weeks (it is growing). However, it is not possible to make a longer-term forecast since the net position may fall by the end of next week. We also pay attention to the fact that the green and red lines of the first indicator are not moving towards each other now and are not moving away from each other. Therefore, it is also impossible to talk about any trend now.

There were again quite a few important fundamental and macroeconomic events in the UK this week. In principle, we can single out a report on British inflation, which unexpectedly for many fell from 3.2% to 3.1% y/y. However, such a weak decline hardly indicates a general slowdown. In America, a decrease in inflation was recorded, after which it began to accelerate again. Also, the Chairman of the Bank of England, Andrew Bailey, did not give any new information to traders. In general, all the heads of central banks repeat the same theses from speech to speech. That's what Jerome Powell did on Friday. Therefore, there is no new information on monetary policy and quantitative stimulus programs at this time either.

Consequently, the local fundamental background is now as neutral as possible. Business activity in the manufacturing and services sectors increased in October, but retail sales fell in September. It became known on Friday.

1) The pound/dollar pair has returned to the Ichimoku cloud again. If it manages to gain a foothold above it again, then the trend may change to an upward one, and in this case, we advise buying the pair since the probability of forming a new upward trend will increase significantly. The first target will be the resistance level of 1.4099. So far, it cannot be said that the price has overcome the Ichimoku cloud.

2) Bears can still return to the market, as there was no clear overcoming of the Ichimoku cloud. However, the critical line has been overcome, so we do not recommend selling the pound at this time. If there is a rebound from the Senkou Span B line, and the price is fixed below the Kijun-sen line, we recommend selling the pair again with a target of 1.3400.

Interesting? Write a comment below.
 Trading plan for the GBP/USD pair for the week of October 25 - 29. New COT (Commitments of Traders) report. The pound continues
Forward 
Backward 