Trading plan for the GBP/USD pair for the week of November 1-5. New COT (Commitments of Traders) report. The pound is about 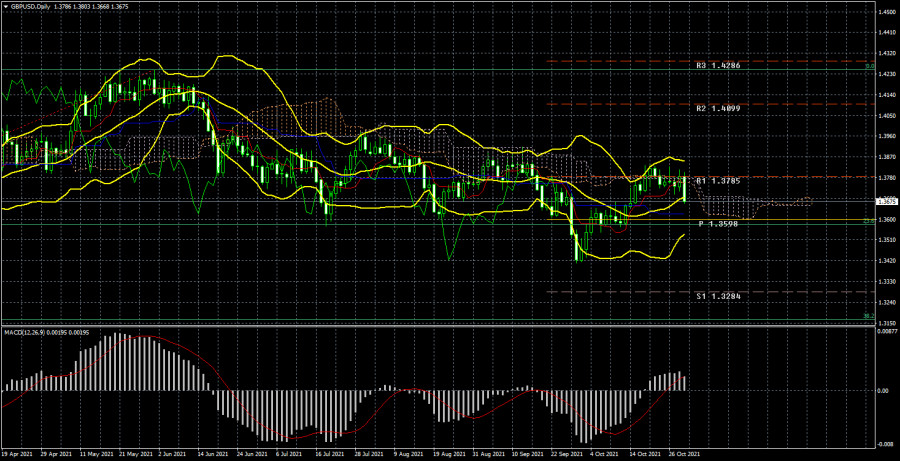 The GBP/USD currency pair continues to trade not too clearly. Last week, we talked about the fact that the price has already risen several times over the past 6 months to the Senkou Span B line, but each time it could not overcome this line. Thus, the downward trend has been maintained all this time, but this is not a trend, and the corrections are very deep. So this time, the quotes of the pound rose to the Senkou Span B line and even went slightly above it, but in the end, they consolidated back below and now the downward movement can resume. Thus, in the long term, the US dollar seems to continue to grow against both the euro and the pound, but all this movement still raises too many questions. We have repeatedly raised the topic of the fundamentals of the dollar's strengthening in the last 6-9 months. If you look at all this movement simply as a correction, then there are no questions, since correction should be in any movement. However, if you try to find reasons for the growth of the dollar, then problems begin to arise. Many factors hypothetically can influence the mood of the market (various kinds of news are regularly received from the UK alone), but most of them now simply cannot be connected with what is happening on the market. The state fundamental background is more important, but it is also weaker at the moment. Everything boils down now to the Fed meeting on November 3, at which it may be announced that the QE program will be curtailed. From our point of view, this is the main factor in the growth of the US currency in recent months. Thanks to the huge volumes of the QE program, the US dollar has fallen very much over the past year and a half. Therefore, when the probability of rejection of incentives increases, it can support the reverse movement. And the weakness of the dollar's strengthening is explained by the fact that the Fed will not begin to curtail incentives in any way. And it may not even announce the relevant decision in November. 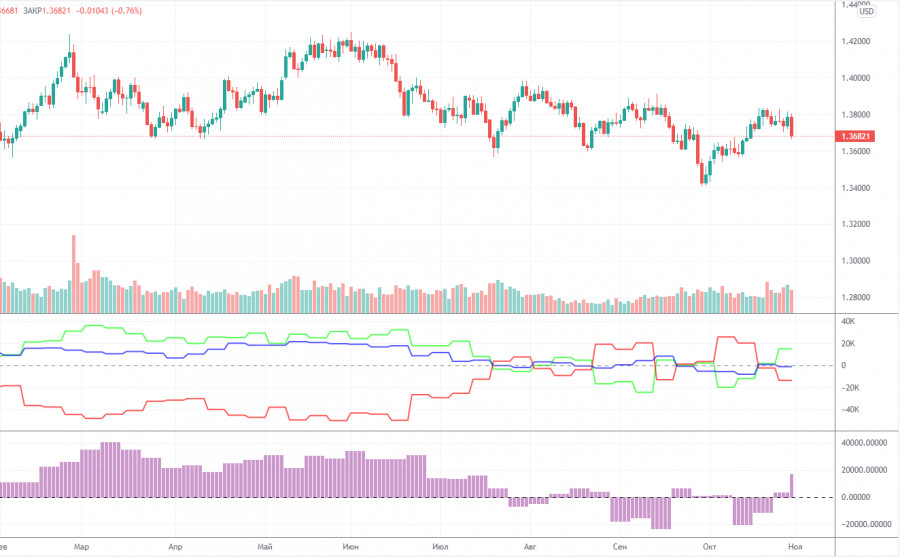 During the last reporting week (October 19-25), the mood of professional traders became more "bullish". The situation with COT reports is even more ambiguous now than with the technical picture. And if we compare the COT reports on the euro and the pound, the situation becomes even more strange. Both indicators in the illustration above show that there is still no clear, accurate, and understandable mood among the major players. Therefore, it simply does not make sense to build any forecasts based on COT reports now. The illustration above clearly shows the entire movement of the pair over the past six months. It's quite difficult to call it a trend or even a trend. In the last couple of months, the mood of the major players has been constantly changing. The green and red lines of the first indicator (the net positions of the "Commercial" and "Non-commercial" groups of traders) change the direction of movement, constantly crossing the zero mark. This means that the two largest groups of traders are constantly increasing and reducing net positions. During the reporting week, professional traders opened 2.8 thousand buy contracts and closed 10.7 thousand sell contracts. Thus, their net position increased by 10 thousand contracts. This corresponds to what has been happening with the pound in recent weeks (it is growing). However, it is not possible to make a longer-term forecast, since, by the end of next week, the net position may fall. Especially considering the fall of the pound itself on Friday.

In the UK this week, there were no macroeconomic statistics and no "foundation" at all. Thus, traders had to focus only on American statistics, and in the States, there was only one important report - GDP for the third quarter. It was published on Thursday, and the US dollar fell by 60 points because of it. However, on Friday, for no apparent reason, the US currency began to grow strongly and added 120 points during the day. And this is although there were no important macroeconomic statistics on this day either in the States or in Britain. In general, something strange happened on Friday, because the volatility of the two main pairs was high at once, while there was either no news or they were ignored by the markets (as in the case of European inflation and GDP on Friday). Well, in this case, we can only wait for the Fed meeting, which will take place next week.

Trading plan for the week of November 1-5:

1) The pound/dollar pair failed to overcome the upper boundary of the Ichimoku cloud. If it manages to gain a foothold above it again, then the trend may change to an upward one, and in this case, we recommend buying the pair since the probability of forming a new upward trend will increase significantly. The first target will be the resistance level of 1.4099.

2) The bears managed to keep the pair below the Ichimoku cloud and now they can try to develop their success again. If the nature of the movement does not change, then a new round of downward movement will begin now with goals below the minimum of the previous round (below the level of 1.3400). However, by and large, the downward movement was observed only on Friday. Thus, everything can still change, especially after November 3. However, sales are still more preferable. If the bears manage to gain a foothold below the critical line, then the chances of further decline will increase even more.

Interesting? Write a comment below.
 Trading plan for the GBP/USD pair for the week of November 1-5. New COT (Commitments of Traders) report. The pound is about
Forward 
Backward 