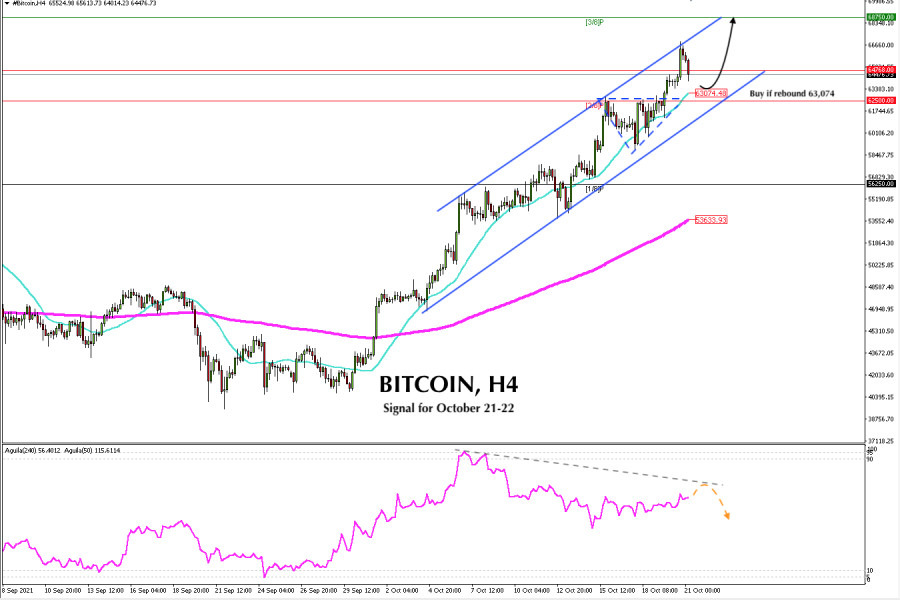 On October 20, the BTC price reached an all-time high at 66,938, which has also led the total cryptocurrency market capitalization to a new all-time high above $2.60 trillion. This is a sign that in the short term, it could continue to rise to the psychological level of 70,000.

Bitcoin rose as a result of the successful debut of the exchange-traded fund ProShares's Bitcoin Strategy (BITO), which was the engine of optimism in the cryptocurrency market and gave BTC momentum to near 67,000. The trading volume of the ProShares ETF on the first day of the launch exceeded one billion dollars. Some analysts see how the market has assimilated this news and believe that before the end of the year, BTC could reach 85,000.

On October 19, Bitcoin broke the 2/8 Murray resistance at 62,500 and rose to a new high near 67,000. This level coincides with the top of the bullish channel formed on the 4H chart.

After having reached the level of 67,000 and touched the top of the bullish channel, a technical correction is observed and accumulates a loss of almost 5%. For this reason, we believe that this correction can give it a new upward impulse. BTC may reach the level of 3/8 Murray. It is recommended to wait for a technical bounce around the 21 SMA located at 63.074.

BTC continues to trade within its bullish channel formed since October 4. It is expected to continue to rise in the coming days. The key levels of support to be able to buy can be located at the SMA of 21 (63,074) and 2/8 of Murray (62,500).

The eagle indicator is showing a bullish signal. The bullish momentum is likely to be strong until the oscillator reaches the resistance level. BTC could continue with its rally up to the resistance of 68,750 and up to the psychological level of 70,000.

Our forecast is bullish only if BTC keeps trading above 2/8 Murray. This zone has turned into strong support. Any bounce from this level will be considered as an opportunity to p[en long positions. On the contrary, a daily close below 62,000 will be the start of a strong correction towards the support of 1/8 murray around 56,250.