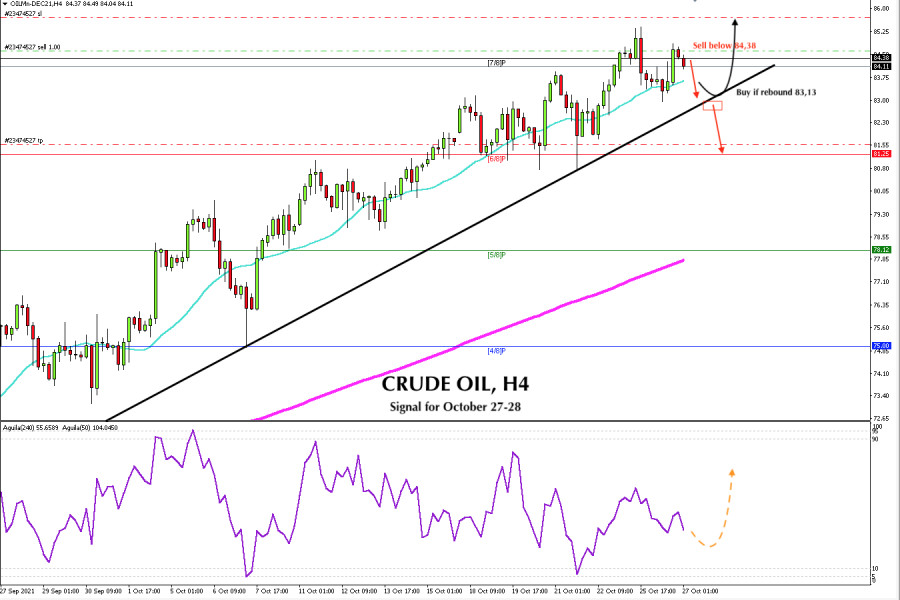 On October 25, Crude Oil, (#CL) printed a new high at 85.39 and after this it made a correction to the 21-moving average at 82.96. Yesterday, the market revived optimism and WTI reached the intraday high at 84.85, albeit it failed to consolidate above 84.38 and is now trading below 7/8 of murray.

Crude Oil gained momentum to approach the annual high. On the back of the bullish trend in the equity market, contributing to the rise in crude, WTI challenged the psychological level of 85.00. We expect a technical correction towards the 6/8 murray support around 81.25 in the next few hours.

In its latest report, the World Bank stated that rising oil and energy prices pose significant short-term risks to global inflation. If this trend continues, it could also affect the economy of energy-importing countries.

In the American session at 10:30 am, crude inventories will be published. Analysts expect an increase of 2.0 million in inventories last week. This data that is published every week is a main indicator of the imbalances of supply and demand in the market, which can cause changes in production levels and price volatility.

If the data exceeds expectations and is higher than + 2.0M, crude oil may fall to the support level of 81.25. On the other hand, if the data is negative, an upward movement could occur to the level of 85.38 and 87.50.

According to the 4-hour chart, crude is trading below 7/8 murray. This level represents a reversal zone. If WTI price breaks below 83.74 (SMA 21), it could continue with the correction to support 6/8 around 81.25.

In the daily chart, it is observed that crude remains above an uptrend channel that began on August 23. The support of this channel is located at 83.13. A technical rebound around this level could give crude a new bullish momentum and the price could rise to the 8/8 murray level at 87.50.

On the contrary, a break below 83.00 could be the beginning of a bearish scenario and the price could fall to the support at 81.25 and to the 21 SMA around 80.25. The eagle indicator in the daily chart has reached the level of 95, which represents an imminent downward correction.