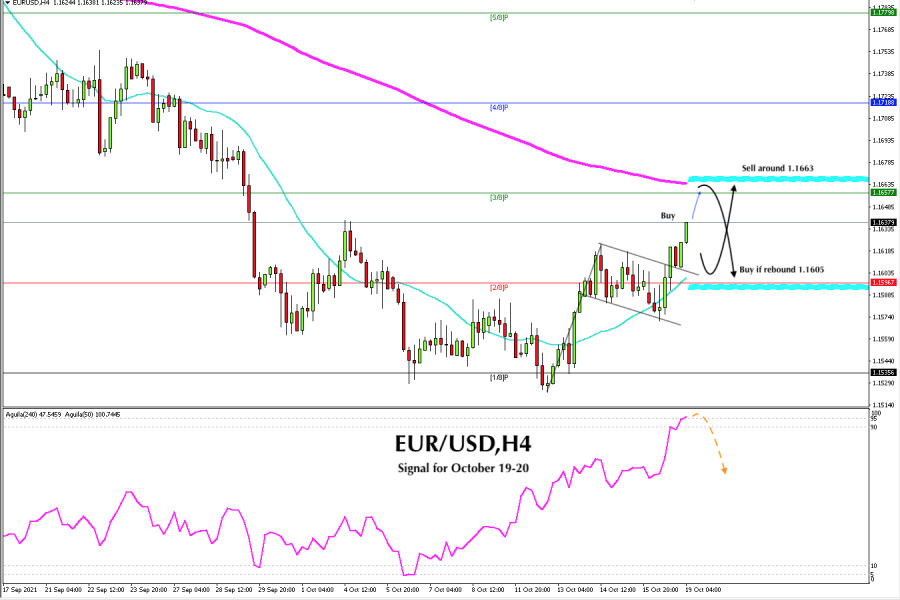 In our analysis yesterday, we mentioned that the euro had formed a bullish pennant pattern. In today's Asian session the breakout of this technical figure was confirmed. Now, the probability is that it will continue to rise to the strong resistance level of 3/8 Murray and up to the 200 EMA located at 1.1663.

Risk aversion is once again taking over the stock market with the main European stock indices trading with a bearish bias and Wall Street with mixed data. Investors are cautious as November approaches and the Fed is preparing to make its first cut in bond purchases, which may accelerate the fall of the euro.

According to the 4H chart, the upside potential is limited to the 200 EMA. If the euro/dollar pair consolidates above 1.1670, it may be the beginning of a new bullish scenario. The euro could rise to the resistance of 1.1780 where 5/8 of a Murray is located.

On the other hand, the 200 EMA is expected to act as a strong resistance and may act as a barrier for the euro. So, if the euro fails to consolidate above 1.1670, then it will be a good opportunity to sell with targets at 1.1605.

The eagle indicator has reached the 95 level, which represents an imminent downward correction. The euro is likely to test the 200 EMA and then resume its downtrend. If the euro first decides to make a technical bounce off the 21 SMA located at 1.1605, it will be an opportunity to buy around this zone with targets at 1.1670.