Analysis of trades and tips for trading the European currency

Last Friday's trading dynamics ahead of the release of US jobs data were sluggish. One point to enter the market with long positions on the euro was formed. This signal should have been ignored, although it turned out to be profitable. When the price was testing the level of 1.1557, the MACD indicator advanced above the zero mark. This could have limited the pair's bullish run, especially amid statistics on the US labor market. Therefore, I decided not to enter the market by that sigal. No other entry points were formed. 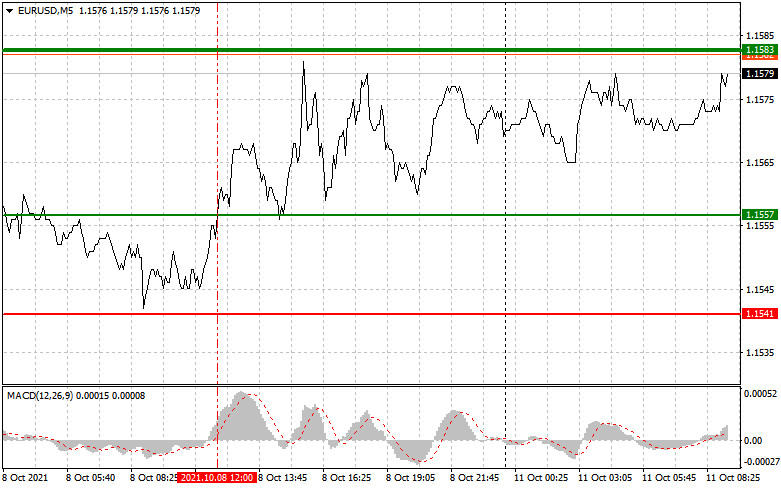 Market participants failed to respond to Friday's speech by European Central Bank President Christine Lagarde as everyone expected the official to speak about inflation, while she did not mention that issue. Data on nonfarm payrolls from the US Department of Labor also surprised investors. On the one hand, the unemployment rate fell sharply. On the other hand, the number of new jobs increased at a rather weak pace. This means that the Federal Reserve will most likely continue to maintain ultra-loose monetary policy. That is why the US dollar weakened slightly, but there was no strong downside momentum. The market remains under bearish pressure. Today's macroeconomic calendar is bereft of any important releases. In the first half of the day, data on industrial production in Italy will be released. Then, Philip Lane, Member of the Executive Board of the ECB, will speak. The second half of the day promises to be even quieter due to Columbus Day in the United States.

Today, if the euro reaches 1.1585 (green line on the chart), it will be possible to open long positions on the euro with a view to rising to the 1.1611 mark. At the level of 1.1611, I recommend leaving the market with a profit and selling the euro (counting on a correction of 10-15 pips in the opposite direction from the level). We can hardly expect a strong recovery in the euro today, especially after Friday's data on the US labor market. Before going long, make sure that the MACD indicator is above zero and is just starting to advance from it. In addition, it will be possible to buy the euro when the price reaches 1.1562. However, make sure that the MACD indicator is in oversold territory. This will limit the pair's bearish run and lead to an upward reversal of the market. In this case, the pair is likely to go up to the opposite levels of 1.1585 and 1.1611.

Short positions on the euro can be considered after the price reaches the level of 1.1562 (red line on the chart). The level of 1.1531 can be seen as a target, where I recommend leaving the market and buying the euro (counting on a correction of 10-15 pips in the opposite direction from the level). Today, volatility promises to be extremely low, so the pair is unlikely to trade under pressure. Before going short, make sure that the MACD indicator is below zero and is just starting to decline from it. In addition, it will be possible to sell the euro when the price reaches 1.1585. However, make sure that the MACD indicator is in overbought territory. This will limit the pair's bullish run and lead to a downward reversal of the market. In this case, the quotes are expected to go down to the opposite levels of 1.1562 and 1.1531. 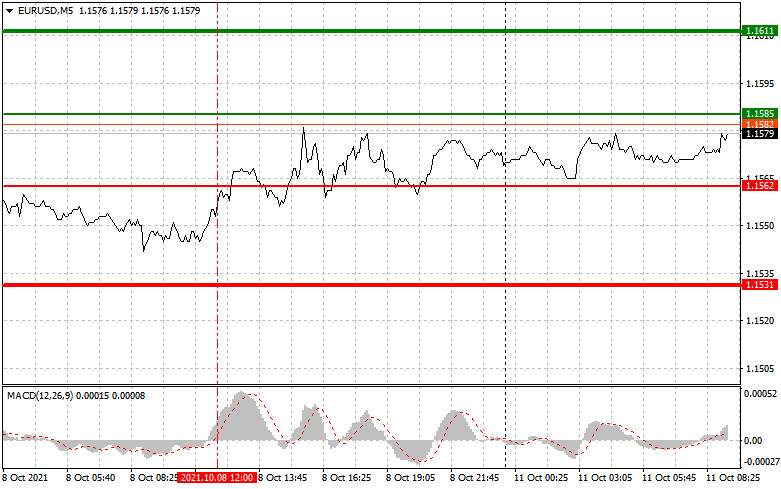 The thin green line means the entry price at which you can buy the trading instrument.

The thick green line indicates the estimated price at which you can place a take-profit order or lock in profits as further growth above this level is unlikely.

The thin red line means the entry price at which you can sell the trading instrument.

The thick red line is the estimated price at which you can place a take-profit order or lock in profits as further decline below this level is unlikely.

The MACD indicator. When entering the market, it is important to be guided by the overbought and oversold zones.

Please note that novice forex traders need to be very careful when making decisions on entering the market. Before the release of important fundamental reports, it is worth being out of the market in order to avoid sharp price fluctuations. If you decide to trade amid the news release, place stop-loss orders to minimize possible losses. Without placing stop-loss orders, you can lose your entire deposit, especially if you do not use money management and a lot size is great.

Please remember that in order to succeed in trading, you need to have a clear trading plan. Spontaneous trading decisions based on the current market situation is an inherently losing strategy for an intraday trader.

Traders are recommended to read the following articles:

Forex Analysis & Reviews: GBP/USD: the plan for the American session on October 11 (analysis of morning deals). The bulls' attempts to continue the pound's growth failed again