Futures on the US stock indices moved higher

Futures on the US stock indices rose on Tuesday as large companies continued to post strong earnings reports for the third quarter. The ongoing reporting season continues to push the indices to their annual highs. so, the stock market has resumed a rally after a period of market volatility in September this year due to problems with the US debt ceiling. Many analysts were afraid that the increase in coronavirus cases would affect consumer activity and company profits. Yet, judging by quarterly reports, consumers' purchasing power is strong.

This week, the trend in the stock market will be shaped by the results of earnings reports. The equity market has already resumed an upward trend thanks to the positive reporting season. The only thing that can affect market sentiment before November may be the deterioration of the epidemiological situation and supply chain disruptions. The government is still unable to tackle these issues.

Today, the main focus will be on Netflix's quarterly report. After the market opening, the company will publish its profit and loss report for the 3rd quarter of this year. The report for the 2nd quarter predicted an increase in paid net subscribers by 3.5 million. Analysts expect this figure to be around 3.84 million. In the 4th quarter, the company is expected the figure to total 8.5 million people, the highest pace since the first quarter of 2019. Apart from that, an earnings report from United Airlines will be released, which will show the pace of the company's recovery after the pandemic.

Despite the weak economic reports on the US economy that have been released recently, the stock market has remained quite resilient. It may be a signal for traders to increase long positions. Yesterday, negative China's GDP data affected investor sentiment. A sharp decline in the US industrial production in September due to supply chain disruptions did not undermine the economy. For this reason, the earnings reports have been strong so far.

Let's look at reports of some companies in the premarket.

Procter & Gamble shares dropped by 1.1% in the premarket after the company said that it would increase prices to reduce commodity and transportation costs. The consumer giant beat estimates by 2 cents a share, with quarterly earnings of $1.61 per share.

Johnson & Johnson reported a quarterly profit of $2.60 per share, 25 cents a share above estimates in the 3rd quarter of this year. Yet, its shares fell due to concerns among investors about a possible rise in prices. Revenue was slightly lower than analysts' forecasts.

Walmart grew by 1.9% in the premarket after Goldman Sachs added the retailer's stock to its "Conviction Buy" list. The company is expected to generate earnings growth by 40%.

Bank of New York Mellon came in 3 cents a share ahead of estimates, with quarterly earnings of $1.04 per share. Revenue also exceeded economists' forecasts.

Philip Morris International, the tobacco producer, gained 3 cents a share ahead of estimates, with quarterly earnings of $1.58 per share. An increase in shipment volumes facilitated revenue rise above forecasts.

Alibaba announced the development of a custom computer chip that the China-based tech giant would use to power its data center servers. The chip will not be available for use outside of Alibaba. The stock climbed by 1.8% in the premarket.

BioNTech, Pfizer, and Moderna are on the watch list after many reports that the Food and Drug Administration was set to approve "mix and match" Covid-19 vaccine booster doses this week. People will be allowed to receive boosters with a different vaccine than they originally got. BioNTech shares jumped by 2.7% in premarket trading, while Moderna added 1.8%. 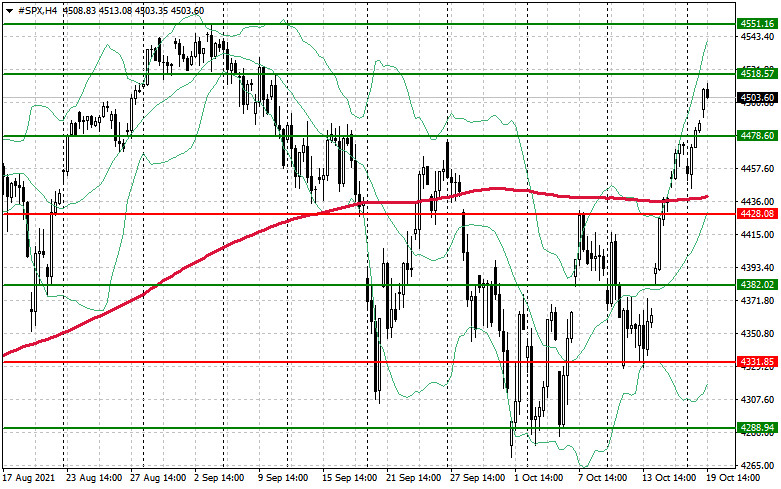 As for the technical indicators of the S&P 500