The USD/CAD pair has found strong support and managed to recover a little after its major sell-off. The price action developed a minor reversal formation, so the pair could come back higher to reach and retest the upside obstacles.

The volatility could be high today ahead of the US and Canadian data. Retail sales in Canada may increase by 2.0% in August compared to a 0.6% drop in July, while the Core Retail Sales may register a 2.6% growth after the 1.0% drop in the previous reporting period.

On the other hand, the US Flash Manufacturing PMI may decline a little from 60.7 to 60.5, while the Flash Services PMI could jump higher to 55.3 from 54.9. Fed Chairman Jerome Powell's speech could bring high volatility later today. 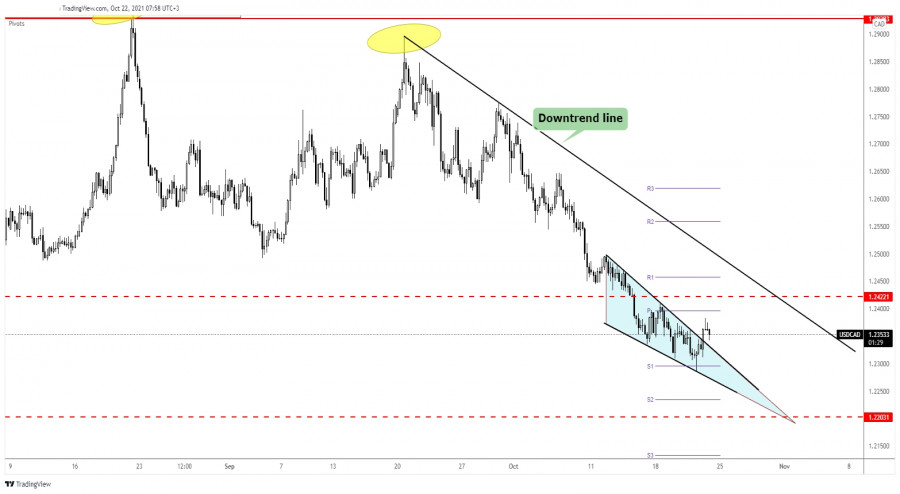 As you can see on the H4, the CAD/USD escaped from the minor Falling Wedge reversal pattern signaling a potential growth towards 1.2422 and up the downtrend line. Now, it is trading in the red at 1.2347 level and it could come back to test and retest the pattern's resistance, the upside line.

Testing and retesting this line could bring new long opportunities in the short term. However, you should be careful as market sentiment may change after the release of macroeconomic reports. From the technical point of view, the USD/CAD has registered only a false breakdown with great separation below the 1.2300 psychological level and through 1.2296 weekly R1. This was the first signal that the downside movement could be over.

USD/CAD tries to confirm its breakout from the Falling Wedge pattern. Personally, I want to see tests and retest of the broken line followed by a new higher high before considering going long.