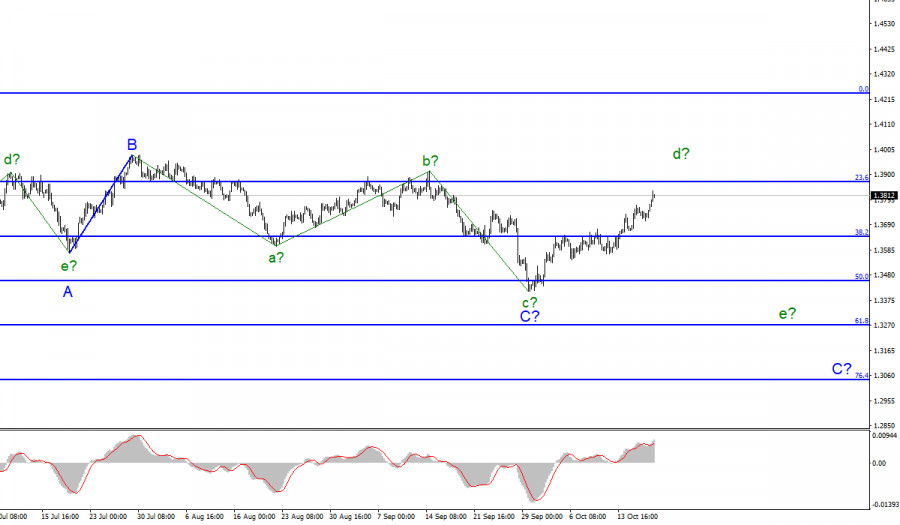 For the pound/dollar pair, the wave marking has become more complicated recently. The pair made a successful attempt to break through the low of the previous waves a and e. Thus, adjustments were made to the wave pattern. So, it has got the form of a downward trend section, which may turn into a correction. Nevertheless, this downward section may already be completed or it may acquire a much longer shape. The picture above shows that the last wave C may already be completed after it has taken a three-wave form. If it takes a five-wave form, then after the completion of the current wave d, the decline in the quotes within the e wave may resume. Now, this scenario looks likely. An unsuccessful attempt to break through the 23.6% Fibonacci retracement level may just indicate the readiness of the markets to open short positions on the pound sterling. At the same time, a breakout of the 23.6% level may change the wave marking. Thus, the downward section of the trend may be considered completed.

UK inflation has slowed down but it may be a short-term decline.

On Wednesday, the pound/dollar pair fell by 70 and then rose by 80. A decrease in quotes occurred in the first half of the day and an increase in the second. In the morning, the UK released its inflation report, which was rather controversial. Economists had expected inflation to climb or remain at the same level. Yet, the indicator showed a decline. This was rather surprising as Andrew Bailey, the governor of the Bank of England, stated that inflation would continue to move up. He is also sure that its rise is temporary. Nevertheless, the Bank of England assumes that inflation will lift to 4% before it starts to decline and stabilizes around the target level of 2%.

Some analysts believe that inflation in the UK may even accelerate to 5%. In any case, the higher and faster inflation jumps, the sooner the Bank of England will begin to taper the QE program and raise the interest rate. However, the regulator is unlikely to hike the key rate before reducing bond purchases. Thus, the current weak inflation postpones an increase in the key rate. However, it is better not to jump to conclusions as power prices around the world continue to rise. Hence, inflation may resume growth in October. It means that the downward movement of the pound sterling may be short-lived. In the second half of today, it may gain momentum. However, if it does not halt its decline, wave d will go beyond the peak of wave b, which rarely occurs.

The wave pattern continues to raise some questions. There is a downward section but not an impulsive one. Since the construction of an ascending wave is currently underway, it is recommended to wait for its completion before selling the pair. It is better to wait for the completion of the expected wave e in C. If the pair drops below the 1.3871 mark. it will indicate that traders are ready to open short traders on the pair. 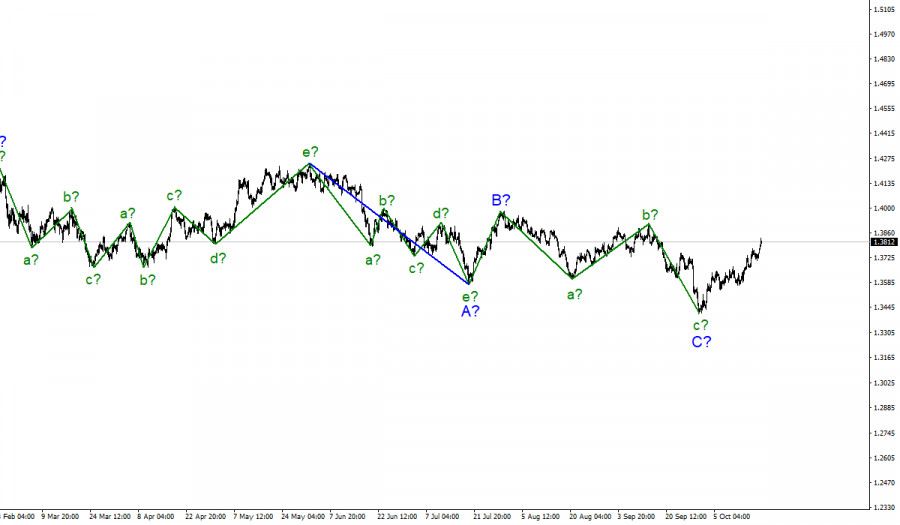