Analysis and trading recommendations for EUR/USD on November 4

Euro rose by 40 pips yesterday, thanks to the signal to buy that coincided with the MACD line being at the oversold area. It allowed traders to take long positions, provoking the increase in the pair. The main driver was the decision of the Federal Reserve to taper bond purchases starting November this year. 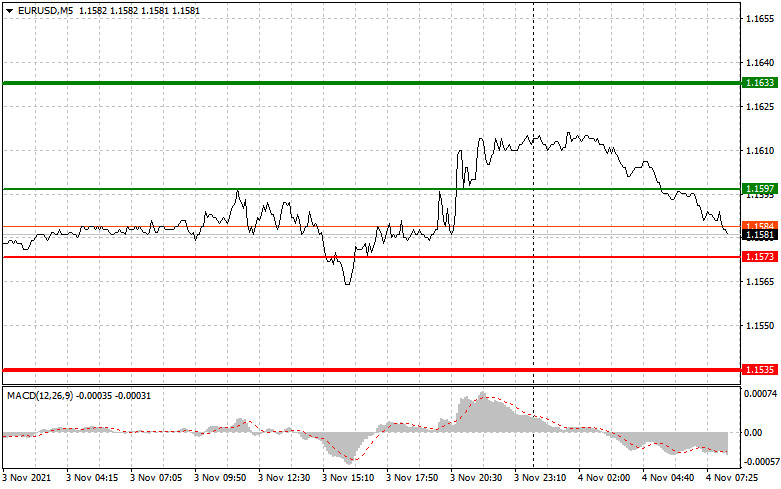 There will be a lot of data coming out today, especially in the Euro area. First is the report on business activity in the services sector, followed by the report on composite PMI. If these indicators show slower growth, pressure on euro will increase. But it will recover if forecasts from the European Commission point to a potential ECB policy change amid a higher inflation.

In the afternoon, US will publish its data on jobless claims, where another increase is expected. If this happens, dollar demand will decline, which will result in a rise in EUR / USD.

Open a long position when euro reaches 1.1597 (green line on the chart) and take profit at 1.1633. Strong EU data will push the price up.

Before buying, make sure that the MACD line is above zero, or is starting to rise from it. It is also possible to buy at 1.1573, but the MACD line should be in the oversold area, as only by that will the market reverse to 1.1597 and 1.1633.

Open a short position when euro reaches 1.1573 (red line on the chart) and take profit at 1.1535. Weak EU data will continue the pressure observed yesterday, which was brought by the Fed policy decision that was in favor of dollar.

Before selling, make sure that the MACD line is below zero, or is starting to move down from it. Euro could also be sold at 1.1597, but the MACD line should be in the overbought area, as only by that will the market reverse to 1.1573 and 1.1535.