Analysis and trading recommendations for EUR/USD on November 5

There was a signal to sell in EUR / USD on Thursday, but the decline was limited because the MACD line was in the oversold area. Then, in the afternoon, a buy signal appeared, and this time it provoked a 15-20 pip increase in the pair. 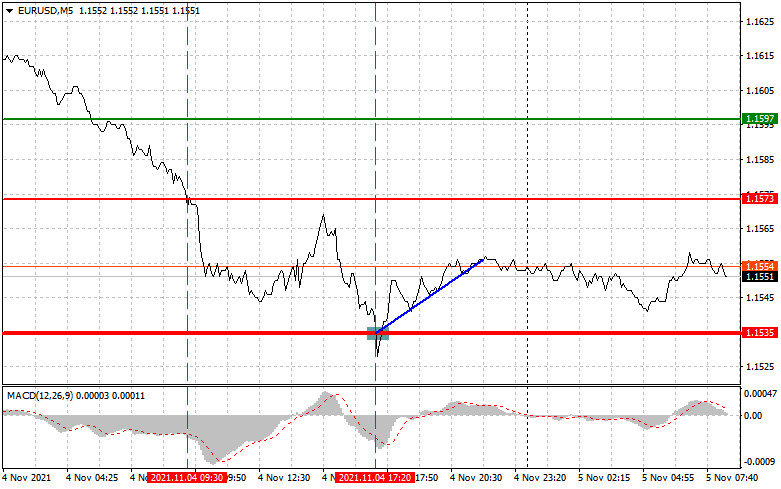 EUR / USD fell yesterday amid disappointing PMI data in the Euro area. At the same time, forecasts from the European Commission gave no reason to buy euro, while statements from the Federal Reserve persuaded traders to actively buy dollar.

This downward momentum may continue today because of the reports that are coming out. In the Euro area, there will be data on retail trade and industrial output, which, if show slower growth, will put more pressure on the pair. It may even escalate if the US reports strong labor market data in the afternoon.

Buy euro when the quote reaches 1.1564 (green line on the chart) and take profit at the price of 1.1604. Growth will be observed if the Euro area reports good performance in industrial output and retail sales. Weak data on the US labor market will also help push EUR / USD up.

Before buying, make sure that the MACD line is above zero, or is starting to rise from it. It is also possible to buy at 1.1546, but the MACD line should be in the oversold area, as only by that will the market reverse to 1.1564 and 1.1604.

Sell euro when the quote reaches 1.1546 (red line on the chart) and take profit at the price of 1.1512. A decline will occur if the Euro area shows poor performance and if the US reports strong data on its labor market.

Before selling, make sure that the MACD line is below zero, or is starting to move down from it. Euro could also be sold at 1.1564, but the MACD line should be in the overbought area, as only by that will the market reverse to 1.1546 and 1.1512. 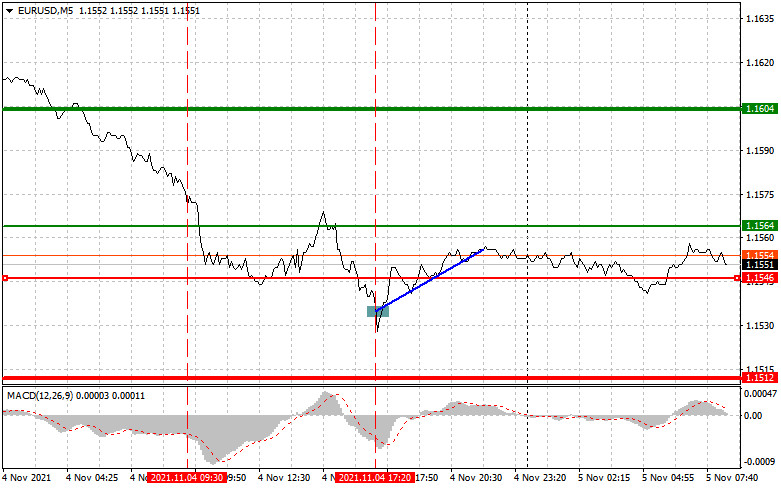