Analysis and trading tips for EUR/USD on November 24

There was a signal to buy in EUR / USD on Tuesday, but the increase was limited because the MACD line was far from zero. But when a signal to sell appeared, the pair rose even though the MACD line was already in the overbought area. This continued for the rest of the day. The upward movement was around 15 pips. 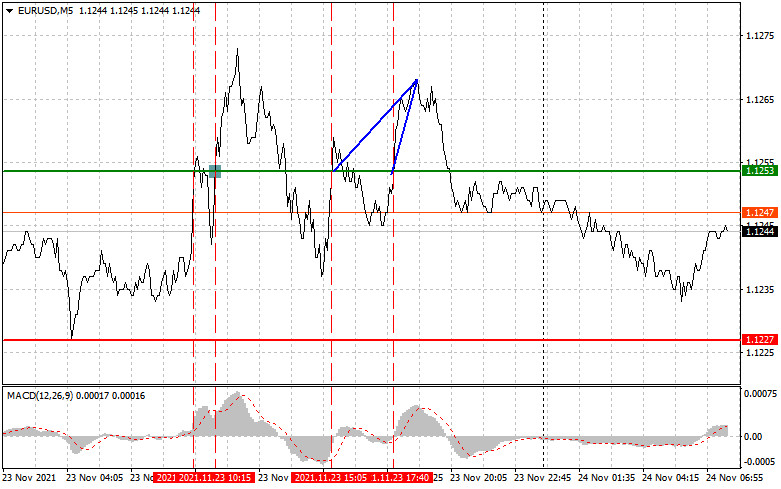 Euro rallied yesterday, thanks to better-than-anticipated reports on manufacturing and service PMI in the Euro area. Meanwhile, the statements of ECB Vice President Luis de Guindos were ignored even though he mentioned the need for stricter inflation control.

The observed bullish momentum may continue today if the data on business conditions, assessments of the current situation and economic expectations come out stronger than the forecasts. ECB board member Fabio Panetta will also speak, and it could push euro higher if he mentions inflationary pressures

In the afternoon, US will release a report on Q3 GDP, which could raise dollar demand if the figure is revised for the better. Data on jobless claims, income and expenses will also be published, followed by the minutes of the recent Fed meeting. If the protocol does not indicate aggressive intentions of the committee members, demand for dollar will decline.

Buy euro when the quote reaches 1.1253 (green line on the chart) and take profit at the price of 1.1299. Demand will increase if the Euro area reports very strong economic statistics.

Before buying, make sure that the MACD line is above zero, or is starting to rise from it. It is also possible to buy at 1.1227, but the MACD line should be in the oversold area, as only by that will the market reverse to 1.1253 and 1.1299.

Sell euro when the quote reaches 1.1227 (red line on the chart) and take profit at the price of 1.1185. Demand will decline if the situation with COVID-19 escalates. Weak data from Germany and strong statistics from US will also provoke a decrease in EUR / USD.

Before selling, make sure that the MACD line is below zero, or is starting to move down from it. Euro could also be sold at 1.1283, but the MACD line should be in the overbought area, as only by that will the market reverse to 1.1255 and 1.1216. 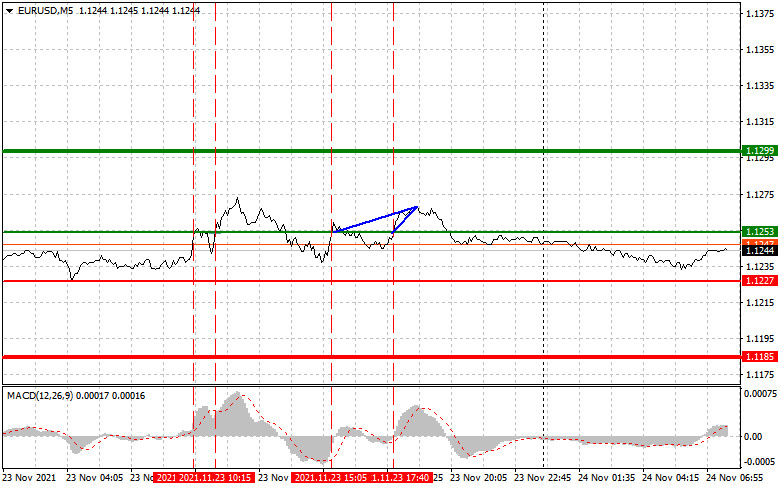