Analysis and trading tips for EUR/USD on November 29

A signal to buy appeared in the market on Friday, but the rise was limited because the MACD line was far above zero. Some time later, a similar scenario took place, but this time the indicator was at the overbought area. It should have led to a strong fall in EUR / USD, but no such thing happened, dealing losses to bearish traders. There was a slight movement, around 15 pips, but after that the pair turned around and continued growing. 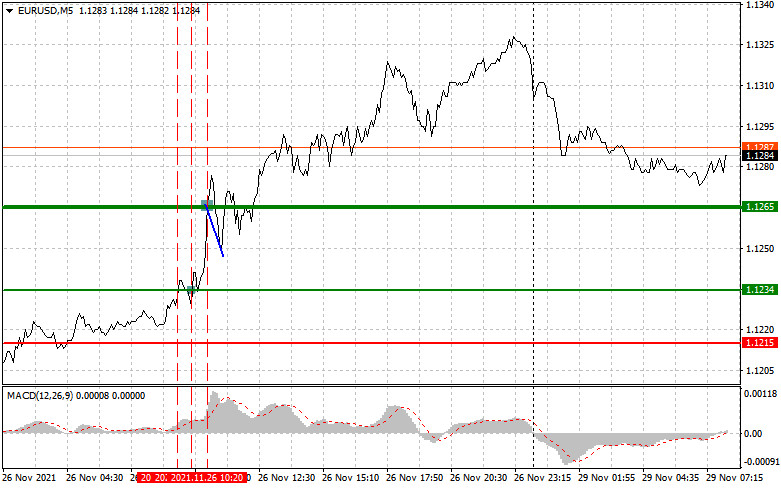 Data on the M3 aggregate of the eurozone money supply and volume of lending in the private sector did not help the euro rise last week, but today the situation may change as there are a number of important reports on the eurozone. In the morning, there will be a report on consumer confidence, which could provoke a surge in volatility. It will be followed by CPI data in Germany, where weak growth will add pressure on EUR / USD. Also scheduled are the speeches of ECB chief Christine Lagarde and Vice President Luis de Guindos. By afternoon, there will be a report on US home sales, followed by a speech from Fed Chairman Jerome Powell. Many anticipate some hints regarding changes in the bank's policy, which, if happens, would lead to a rise in dollar.

Buy euro when the quote reaches 1.1296 (green line on the chart) and take profit at the price of 1.1335. Demand will increase if inflation data on Germany exceed expectations. Hawkish statements from the European Central Bank could also push EUR / USD up.

Before buying, make sure that the MACD line is above zero, or is starting to rise from it. It is also possible to buy at 1.1215, but the MACD line should be in the oversold area, as only by that will the market reverse to 1.1234 and 1.1265.

Sell euro when the quote reaches 1.1271 (red line on the chart) and take profit at the price of 1.1235. Demand will decline if the situation with COVID-19 escalates. Weak data on the eurozone will also provoke a decrease in EUR / USD.

Before selling, make sure that the MACD line is below zero, or is starting to move down from it. Euro could also be sold at 1.1296, but the MACD line should be in the overbought area, as only by that will the market reverse to 1.1271 and 1.1235. 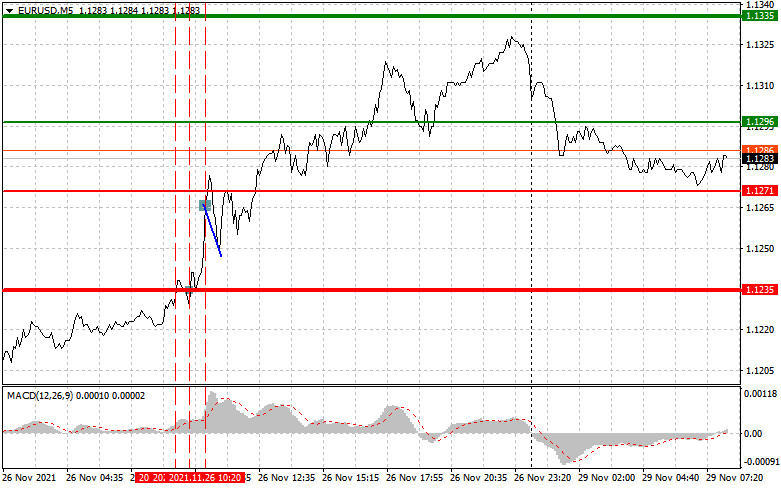