Analysis and trading tips for GBP/USD on November 12

GBP / USD fell by 25 pips on Thursday amid a signal to sell that coincided with the MACD line moving below zero. Then, in the afternoon, another decrease was observed, this time by as much as 40 pips. 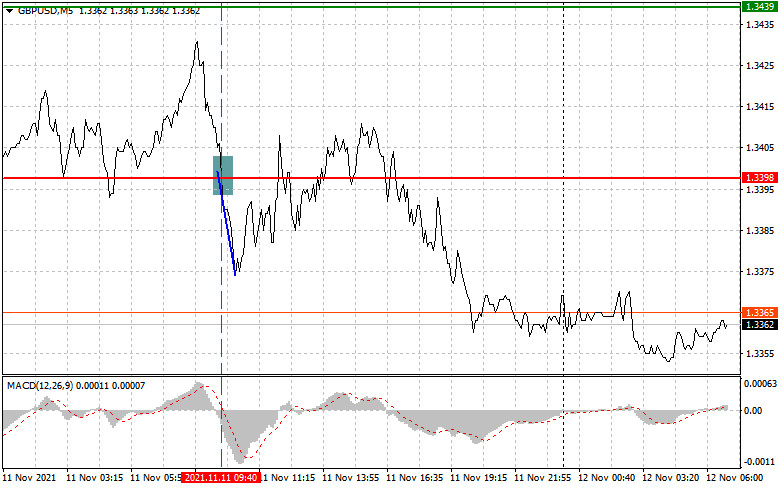 Pound fell yesterday amid weaker-than-expected growth in UK GDP. But it was slightly offset by the strong inflation data, which kept demand for pound since traders are still looking for rate hikes this year. Meanwhile, the speech of Bank of England member Catherine L. Mann had no impact on the market, most likely because they are focused on the situation of the Brexit agreement. The European Union has warned yesterday that negotiations with the UK aimed at resolving the diplomatic dispute over Northern Ireland could be deadlocked if Boris Johnson's government does not agree to change its position. A European Commission official said both sides are facing obstacles in three important areas.

Trading may lag today because there are no important reports expected in the morning. Only Jonathan Haskel's speech will attract attention. Then, in the afternoon, the US will publish its report on consumer sentiment, which may provoke another rise in dollar. Following this, Fed member John Williams will speak, but his statements will have little effect on the market.

Before buying, make sure that the MACD line is above zero, or is starting to rise from it. It is also possible to buy at 1.3347, but the MACD line should be in the oversold area, as only by that will the market reverse to 1.3379 and 1.3427.

Sell pound when the quote reaches 1.3347 (red line on the chart) and take profit at the price of 1.3296. The decline will continue if the US reports strong inflation data, and if the dispute over the Brexit agreement escalates.

Before selling, make sure that the MACD line is below zero, or is starting to move down from it. Pound can also be sold at 1.3379, but the MACD line should be in the overbought area, as only by that will the market reverse to 1.3347 and 1.3296. 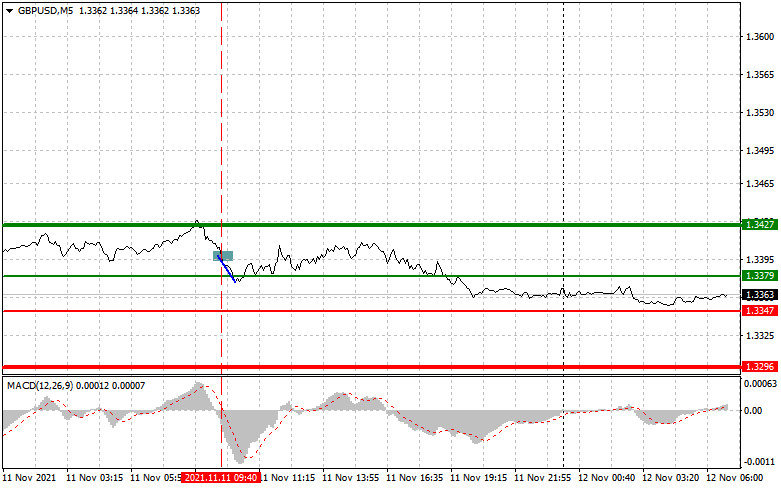