The aussie ended the trading week on a positive note, however, the "total score" was not in its favor. The AUD/USD pair has renewed its four-week price low, reaching 0.7278. Bulls were able to win back some of the lost positions only at the end of Friday's trading, returning to the area of the 73rd figure. But this circumstance does not negate the fact that the pair is within the downward trend, which is due to the strengthening of the greenback. The Australian dollar, in turn, is under pressure from disappointing data on the growth of the labor market in Australia, which were published on Thursday. Almost all components of the release were released in the red zone, reflecting the consequences of the coronavirus crisis. Therefore, the aussie does not have his own arguments for a counterattack at the moment – the further dynamics of AUD/USD depends on the behavior of the US currency. 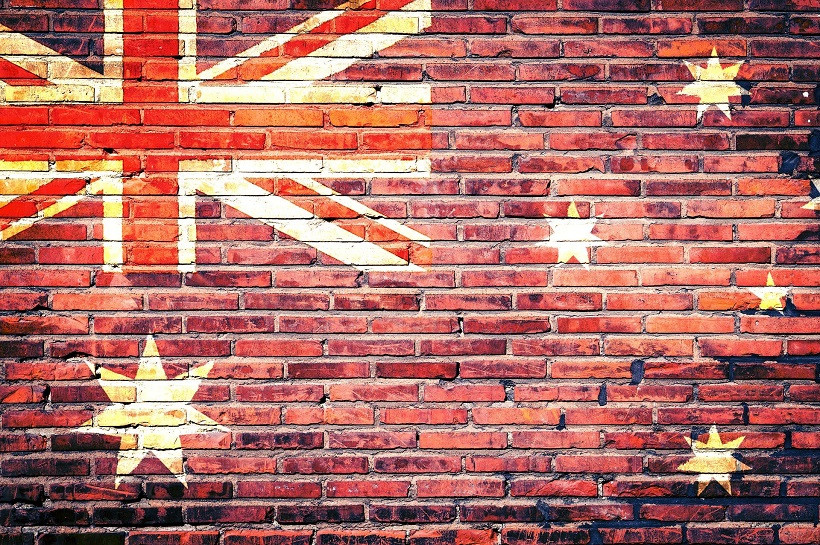 In general, the disappointing "Australian Nonfarm" put an end to the question of a possible acceleration of the pace of curtailing the incentive program. It should be recalled here that the Reserve Bank of Australia has already revised the date of the next revision of the bond repurchase program. It postponed consideration of this issue from November of this year to February 2022. Now the February deadline is also in question, given the figures published last week.

Thus, the unemployment rate in October rose to 5.2%, against a more optimistic forecast (4.8%). This is a very revealing moment. The indicator showed growth after a 10-month consecutive decline. In September, it marginally moved away from the annual low reached in August (rising from 4.5% to 4.5%). The negative dynamics continued in October. And this result is the worst since April of this year.

The employment growth rate was also disappointing. With the forecast of growth up to 50,000, the indicator collapsed into a negative area, decreasing by 46,000. Let me remind you that this indicator also came out in the negative zone in September and August – but then such a result was expected and predictable (since there was a hard lockdown in the largest states of the country during these months). In early October, the federal authorities of the largest regions eased quarantine restrictions, so analysts expected a minimal, albeit an increase in the number of employees. In reality, the situation in the Australian labor market leaves much to be desired. Moreover, the negative dynamics of the employment growth indicator in October was mainly due to the decline in the full employment component. While the indicator of part-time employment showed a relatively tolerable result. So, if the indicator of part-time employment decreased by 6,000, then the component of full employment decreased by 40,000. Let me remind you that the head of the RBA, Philip Lowe, has repeatedly stated that such an imbalance could negatively affect the recovery process. After all, full-time positions imply a higher level of wages and a higher level of social security, compared with temporary part-time jobs. Hence, the decline in consumer activity of Australians and weak inflation growth.

Such dynamics may concern the members of the Australian central bank, but no more. In my opinion, at the last meeting of this year (November 24), the RBA will maintain a wait-and-see attitude, observing the recovery process of the economy after a prolonged lockdown. On the other hand, given such weak data in the labor market, one can not even hope for a tightening of the rhetoric of the RBA. Let me remind you that following the results of the last meeting, RBA Governor Philip Lowe said that the hawkish expectations of the market "are extremely unrealistic." So he commented on rumors that the central bank may raise the interest rate in the second half of next year. The basic scenario suggests that the RBA will start considering this issue no earlier than 2023.

Such a dovish attitude of the Australian central bank (which was "cemented" by the failed data in the Australian labor market) contrasts sharply with the hawkish attitude of the Federal Reserve – at least on the part of some FOMC representatives. The Fed has already begun to wind down QE, and it is quite obvious that the next step of the central bank will be to raise the rate. The only question is how long the interval will be between the completion of the curtailment of incentives (approximately July 2022) and the first round of rate hikes. And whether this interval will be in principle, given the abrupt, record-breaking increase in inflation. 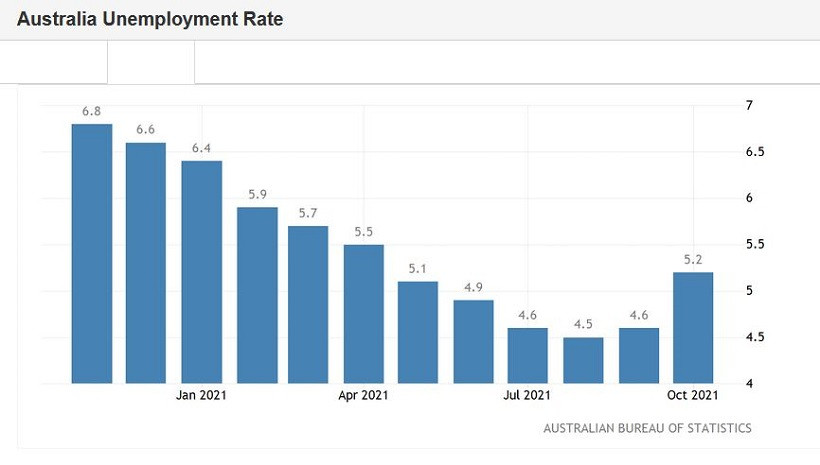 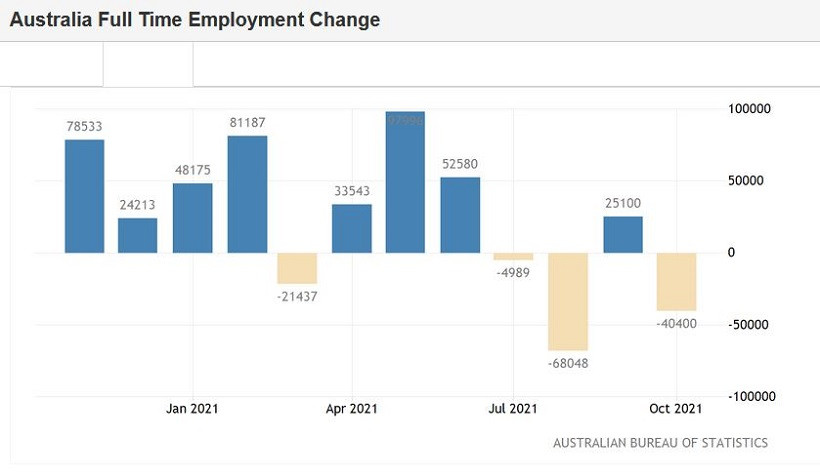 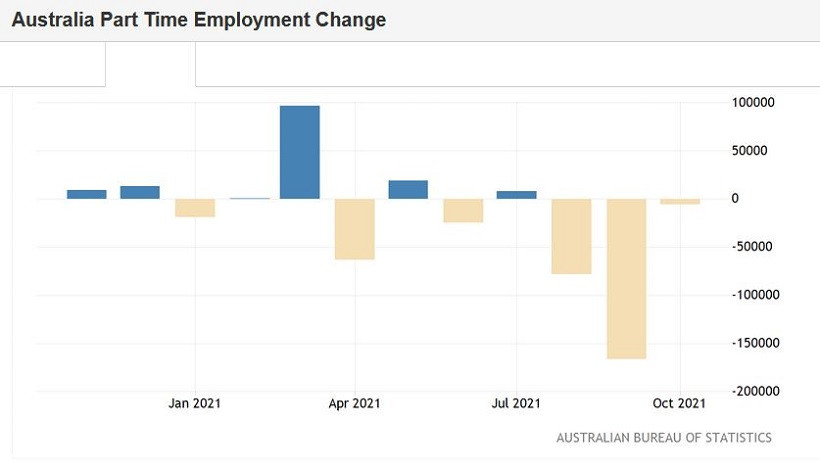 Let me remind you that the consumer price index in the United States continues to break records, updating 30-year highs. Against the background of such trends, traders strongly doubt that Fed Chairman Jerome Powell will maintain Nordic calm next year, ignoring the growth of inflation indicators. By the way, whether Powell will "steer" the Fed next year is also an open question. According to the American press, the chances of Lael Brainard to take the post of head of the Fed in February next year "are growing by leaps and bounds," given her belonging to the Democratic camp. However, in the context of global prospects, it is not so important who exactly will take the reins of the central bank: if inflation continues to show similar growth dynamics, the Fed will have to stop the situation by tightening the parameters of monetary policy. But according to most experts, Brainard will demonstrate a more decisive position on this issue.

Thus, the uncorrelation of the positions of the RBA and the Fed last week "began to play with new colors." Weak data in the Australian labor market suggest that the RBA will continue to maintain a wait-and-see attitude, and may soften its rhetoric regarding the future prospects of monetary policy (for example, stating that the rate may not be raised until 2024).

From the point of view of technique, the AUD/USD pair on the D1 timeframe is located between the middle and lower lines of the Bollinger Bands indicator, but above the Kumo cloud, the upper and lower lines of which "merged" into the price point of 0.7290. It is advisable to go into short positions when overcoming this target – in this case, the Ichimoku indicator will form a bearish Parade of Lines signal. The target of the downward movement in the medium term will be the 0.7180 mark – this is the lower line of the Bollinger Bands on the weekly chart.