Over the past two months, bitcoin has soared considerably, approaching ATH several times. The rapid growth of the digital asset is associated with the launch of the first US bitcoin futures exchange-traded fund. Notably, it attracted a record level of investments. However, due to the launch of the exchange-traded fund, there has been a significant shift in investment flows, which directly affects the cryptocurrency and contributes to a decrease in demand for the coin as a separate financial instrument.

Cryptanalyst Willy Wu was the first who voiced concerns. He believes that a change in the investment flows of large capital may negatively impact bitcoin. He is also confident that investing in bitcoin-based stocks is not a direct investment in cryptocurrency. This is why it limits BTC growth. Large companies have shifted their attention to traditional forms of investments, such as funds and shares, and not in the cryptocurrency. For this reason, risks for investors are significantly lower. Yet, institutional investors may lose their influence on the BTC market.

Notably, in a bull market, the stability that large companies bring to the market plays a huge role. It eases volatility. Investing in ETFs negates this advantage. As a result, the balance of power shifts to speculative players. Over the past few weeks, the number of unique addresses in the BTC network has increased significantly amid the ATH update. Apparently, there are now many retail investors in the market. It also indicates an increase in speculative trading, which undermines the growth of the asset and a jump in volatility. Traditionally, November has always been a highly volatile month since 2017, which is directly related to the final and most powerful stage of the bull market. So, the risk of sharp swings, namely drops, may hammer trading activity and trigger a jump in the volatility index. If so, it is sure to influence the long-term uptrend.

Despite frim forecasts, bitcoin has risen above the fluctuation zone of $60.2k-$64.4k. However, it managed to break above this important level due to impulsive growth. Now, the price is approaching the support zone at around $64.4k. Technical indicators signal consolidation after a powerful upward jump in the price. In other words, there is a slight pullback after a strong upward movement. Thus, sellers managed to push the price lower to the range of fluctuations. If at the end of the current trading day, the price consolidates above this line, then tomorrow we can expect a retest of $68k, which coincides with the Fibo retracement level. At the same time, there is an increase in the Take Profit orders above the $66.2k mark. The price is unable to climb higher due to this factor. Yet, the number of long positions is also growing. There is a probability that the pair may retest $66.2k. If it breaks through this level, the price may fall below $64.4k. If so, we should expect a decline in activity and a continuation of the consolidation stage. 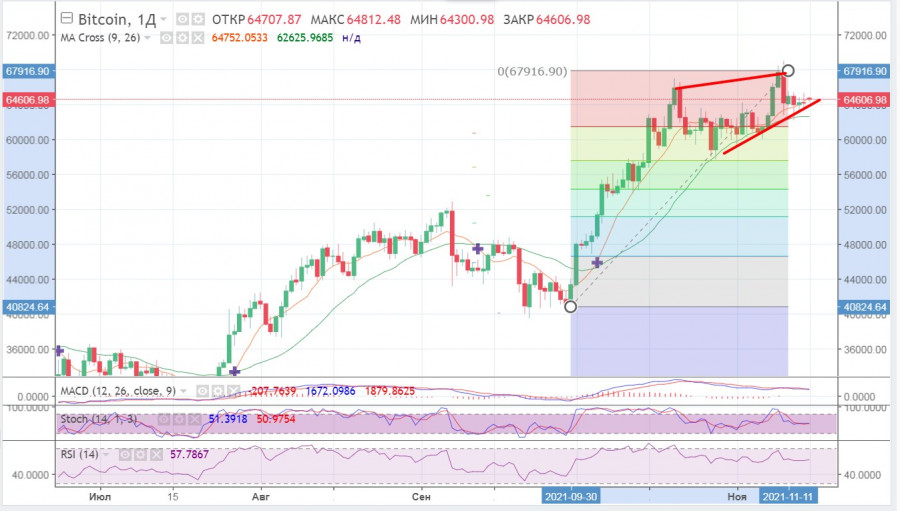