EUR/USD analysis on November 15, 2021. Will Jerome Powell keep his post? 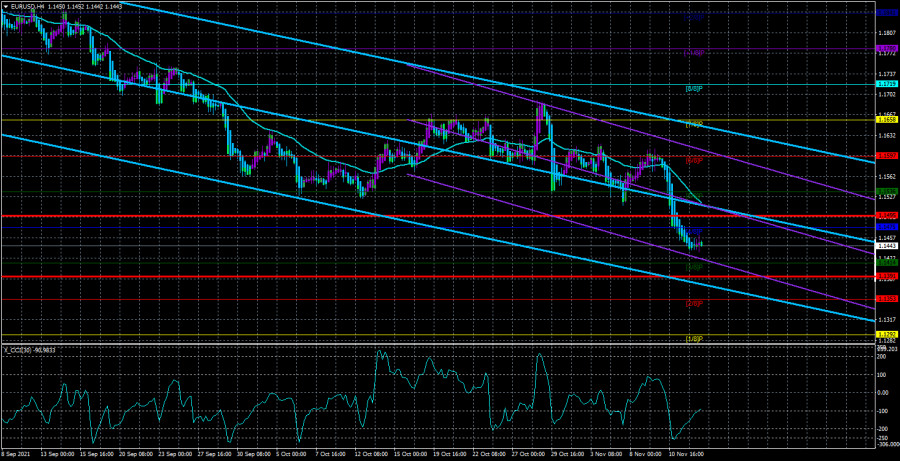 EUR/USD continued its downtrend on Friday although the movement was slow. It is not so easy to quickly identify a reversal or a change in a price movement on a 4-hour chart. In fact, the downward movement still continues. What is more, the pair failed to start a round of upward correction on Friday although conditions for suitable for this. By the way, the pound sterling did well during the correction. Therefore, the downward movement is likely to continue as the markets are not yet ready to complete it. At this time, both linear regression channels and moving averages are staying bearish. However, the CCI indicator has just left the oversold area which means that at least a slight upward pullback should occur in the near future. It is good to remember that the entire downtrend observed last week was initiated by a single report on US inflation. Thus, the current technical picture shows that there is no reason for the downtrend to complete at the moment. The pair's trajectory remains unfavorable, so it is better to be traded either on the lowest or on a daily time frame.

Three reasons why Jerome Powell may not be re-elected

Since there were no important events on Friday and nothing is expected on Monday, let us discuss the chances of Jerome Powell to stay the head of the US Federal Reserve. US President Joe Biden is expected to make this decision, but the candidacy of the Fed's Chair (whoever it is) should be supported by both houses of Congress. And this is the first reason why Powell is unlikely to remain in office. The fact is that both chambers are ruled by Democrats, and Powell is a Republican who was appointed by Donald Trump. Senator Elizabeth Warren recently called Powell a "dangerous person" and made it clear that she would not vote for him. Other congressmen accused Powell of not paying enough attention to the issue of climate change and the lack of minorities in leadership positions at the Fed. Thus, Democrats have already made it clear that they do not support Powell's candidacy.

The second reason against Powell is associated with the recent scandal inside the Fed.It came to light that several board members were actively buying and selling various securities. Curiously enough, some of them were dealing with the same securities that the Fed conducted transactions in. There is an obvious use of insider information and abuse of power. And most importantly, Jerome Powell took part in such operations. In fact, there is no law that would prohibit such transactions by members of the Fed's board. However, it is a question of corporate ethics since it is absolutely clear to everyone that "traders inside the Fed" used insider information and their power to enrich themselves. Naturally, the Fed's corporate credibility is in question now.

The third reason may seem too obvious. Joe Biden may want the Fed to be run by someone from his team. Of course, this does not mean that Biden is going to give orders to the central bank which is actually not under his control. However, Lael Brainard is more likely to agree with Biden unlike Jerome Powell who was not afraid to argue with Donald Trump.

In addition to this, Lael Brainard, the only Democrat in the Fed, has already been interviewed at the White House. And she is said to have passed it. It can hardly be a coincidence that Biden's choice fell to the only Democrat in the Fed. As for the monetary policy and the views held by both candidates, this factor is not the most important now. Both Brainard and Powell support dovish stance on the regulator's policy. However, changes in the Fed's policy depend not only on them. Therefore, this factor seems to be the least important one. 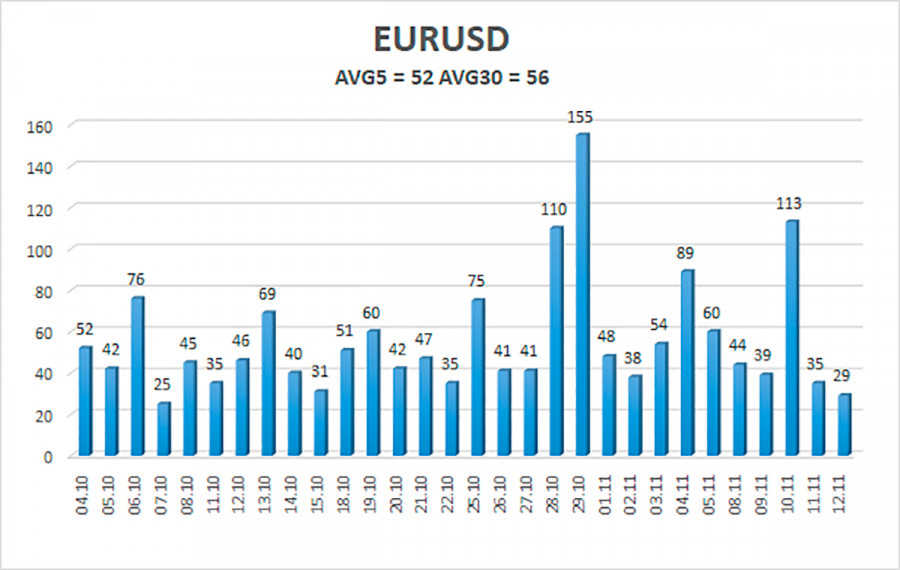 On November 15, the volatility of the euro/dollar pair is within 52 pips which is characterized as average. Thus, today, we expect the pair to trade between the levels of 1.1391 and 1.1495. An upside reversal of the Heiken-Ashi indicator will signal an upward correction.

The EUR/USD pair continues its downward movement. Thus, it is recommended to keep short positions open with the targets at 1.1414 and 1.1408 until the Heiken-Ashi indicator reverses upwards. Buying the pair will be relevant if the price consolidates above the MA with the target at 1.1597. You should remember, though, that reversals happen quite often at this time, and false breakouts of the MA are very common now. Besides, volatility remains rather low.

Linear Regression Channels help identify the current trend. If both channels have the same direction, this is a sign of a strong trend.

Moving average (20.0, smoothed) defines a short-term trend and the direction in which to trade now.

Volatility levels (red lines) represent a probable price channel in which the pair is likely to stay the next day, based on the current volatility indicators.

The CCI indicator: its location in the oversold area (below -250) or into the overbought area (above +250) means that a trend reversal is approaching.