EUR/USD: plan for the European session on November 4. COT reports. Fed cuts measures to support the economy. The dollar reacts

Yesterday afternoon, the formation of a false breakout in the support area of 1.1576 led to the formation of a good signal to buy the euro. The 5-minute chart shows how the bulls are firmly consolidating above this range, which leads to a good signal to open long positions ahead of the publication of the Federal Reserve decision on interest rates. As a result, there is an increase of more than 40 points. 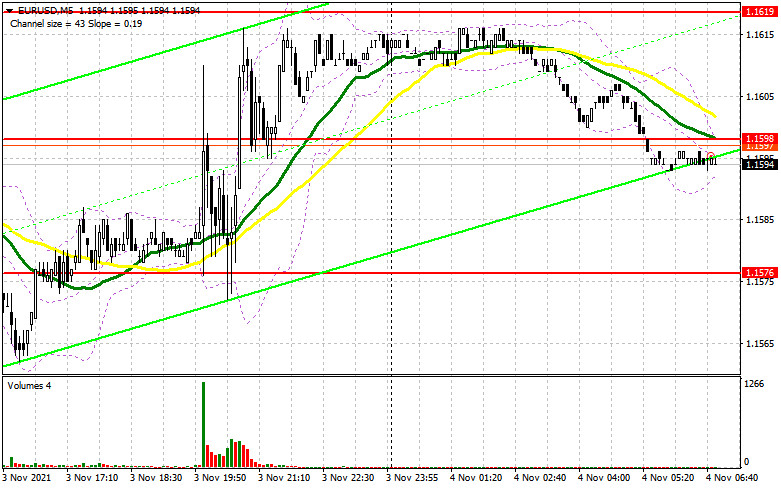 Today there is a huge amount of data on activity in the eurozone countries for October this year, which will play a decisive role in the direction of the EUR/USD pair in the morning. If the activity slows down, the pressure on the euro will return. In this case, the bulls will have to try very hard to protect the support at 1.1574, where everything started yesterday. The formation of a false breakout there, similar to what I discussed above, will give an excellent signal to buy the euro in order to go beyond the upper border of the side channel 1.1615. But to continue the uptrend, which we have formed since November 1 of this year, bulls need to break above 1.1615. Most likely, the bulls will focus on this level. Strong fundamental statistics and active growth in producer prices in the euro area, together with the report of the European Commission on the economy, will contribute to the growth of the European currency in the first half of the day. The breakout and test of the level of 1.1615 from top to bottom forms an excellent entry point into long positions, which will open the way to 1.1635 and 1.1653, where I recommend taking profits. A further target will be the level of 1.1674, but it will be available on condition of weak reports on the United States of America, planned for the second half of the day. In case of a correctional decline in EUR/USD after the statistics of the eurozone and the absence of bulls' activity at the level of 1.1574, I advise you to postpone purchases to 1.1549. However, it is best to wait for the formation of a false breakout there as well. You can open long positions in EUR/USD immediately on a rebound from the minimum of 1.1526, or even lower - from 1.1494, counting on a correction of 15-20 points within the day.

Bears managed to defend yesterday the important resistance level of 1.1615 and are now counting on weak fundamental data on the eurozone. If activity in key European countries slows down, we can expect a repeated decline to the 1.1574 area, but until then we need to think about the protection of 1.1615. Only the formation of a false breakout there will lead to the formation of a signal to sell the euro with the aim of reducing to the support of 1.1574. A really tough struggle will unfold for this level. Therefore, only its breakout and renewal from the bottom up forms an additional signal to open new short positions with the subsequent fall of the pair to the 1.1549 area. A breakdown of this range will lead to the demolition of buyers' stop orders, which will quickly bring EUR / USD to 1.1526, where I recommend taking profits. A further target will be the support at 1.1494. Under the scenario of the growth of the pair in the first half of the day and the absence of sellers at the level of 1.1615, which is more likely, it is best to postpone selling until the test of the high of 1.1635. It is possible to open short positions immediately on a rebound in the expectation of a downward correction of 15-20 points from a large resistance at 1.1653. 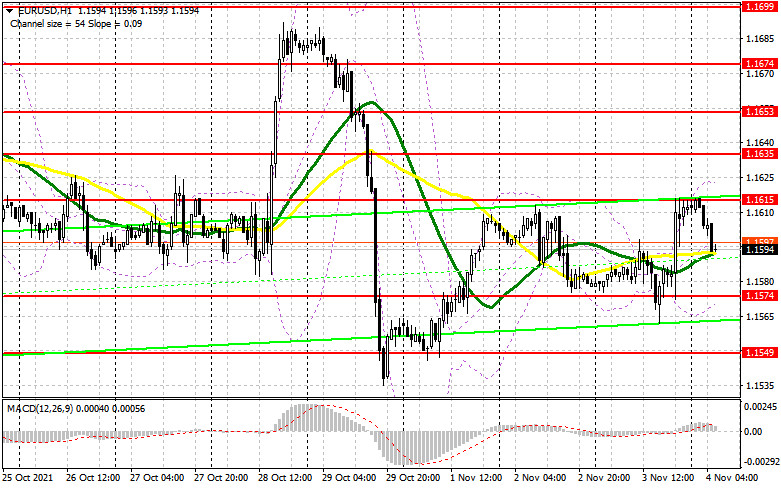 The Commitment of Traders (COT) report for October 19 revealed that both short and long positions declined, which led to a slight recovery in the negative delta, as more bears than bulls left the market than. Inflation in the eurozone came out last week, which rose and coincided with economists' expectations. This has forced many representatives of the European Central Bank to revisit the topic of changes in monetary policy. However, the fact that virtually everyone stuck to a wait-and-see attitude and retained stimulus measures in the form of bond purchases after the end of the PEPP program in March next year put some pressure on the European currency. The slowdown in manufacturing and services in the eurozone also prevented euro bulls from getting beyond the 17th figure. However, a key problem in the short term, negatively affecting the euro's growth, is the sharp spread of the fourth wave of coronavirus infection throughout the European Union. In the United States of America, the strong recovery in the economy continues to support the greenback. The fact that the Federal Reserve is already seriously considering curtailing the bond purchase program at its next meeting in November will also limit the euro's upside potential against the US dollar. The COT report indicated that long non-commercial positions fell from 202,512 to 193,320, while short non-commercial positions fell from 220,910 to 205,427 against -18 398. The weekly closing price rose to the level of 1.1613 against 1.1553.