EUR/USD: plan for the European session on November 11. COT reports. US inflation hit the euro. Bears aiming for new low of

Quite a lot of signals to enter the market were formed yesterday. Let's take a look at the 5 minute chart and understand the trades. In the first half of the day, the euro bears tried to maintain the pressure that was formed after the release of data on inflation in Germany. The report was in line with economists' forecasts, which led to a downward movement of the pair and to a breakthrough of support at 1.1572. The bottom-up test of this level formed a good short entry point, which was perfectly implemented in the afternoon, which brought about 30 points in profit. After the release of a strong report on inflation in the US, the pressure on the euro returned. The bulls tried to rise above 1.1560, which resulted in forming a new signal to open short positions, followed by a collapse of EUR/USD by 70 points. 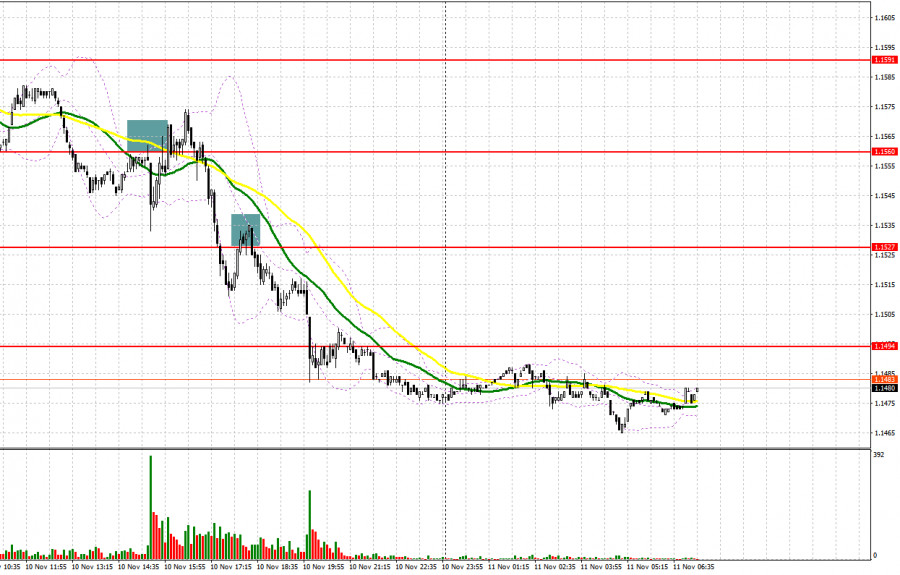 Today, there are no important statistics on the European economy, so all attention will be drawn to the release of the economic bulletin from the European Central Bank and the forecast for the economy from the European Commission. If economists consider inflationary pressures in the eurozone insufficient for more aggressive measures by the central bank, the pressure on the euro will increase. The bulls will try to get back into the market, but in order to stop the large bearish trend they need to get out of the 1.1498 range. Only a reverse test from top to bottom of this range after the release of forecasts from the European Commission will provide a point of entry into long positions, counting on the growth of EUR/USD to the 1.1532 area. There are moving averages that play on the bears' side, which will limit the pair's upward potential. Only a breakthrough of this range and a test from top to bottom will lead to another buy signal and the pair's growth to the high of 1.1571, where I recommend taking profits. If the pressure on EUR/USD persists in the first half of the day, forming a false breakout in the 1.1460 area along with the divergence on the MACD indicator will limit the euro's fall and result in forming a signal to open long positions with the goal of an upward correction of the pair. In case traders are not active at 1.1460, it is best to wait for the formation of a false breakout in the 1.1426 area, but you can open long positions in EUR/USD immediately for a rebound from a low like 1.1371, counting on a correction of 15-20 points within the day.

The bears control the market and all they need is to protect 1.1498. The whole calculation in the first half of the day will be for bad forecasts from the European Commission and the formation of a false breakout at the level of 1.1498. This forms the first signal to open short positions, which will provide an excellent point in the market with the goal of falling to the support of 1.1460. A breakthrough and test of this area from the bottom up will increase pressure on EUR/USD, which will open the way to the lows: 1.1426 and 1.1371. I recommend taking profits on short positions there, since volatility will be at a fairly low level in the afternoon due to the holiday in the US. In case the euro rises during the European session and the bears are not active around 1.1498, I advise you to postpone short positions until the next resistance test at 1.1532. But even there, it is best to open short positions after the formation of a false breakout. The best option for selling EUR/USD immediately on a rebound will be a high around 1.1571. You can count on a downward correction of 15-20 points. 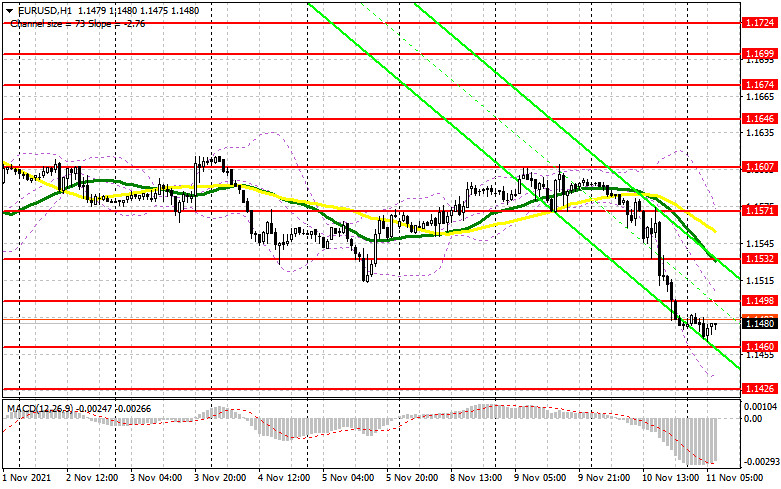 Trading is carried out below the 30 and 50 daily moving averages, which indicates a bear market.