EUR/USD: plan for the European session on November 15. COT reports. The bears took a break. Euro trapped in the horizontal

On Friday, amid a lack of willing bears, the euro was stuck in a narrow horizontal channel with very low volatility of about 25 points. But, despite this, several good signals were formed to enter the market. Let's look at the 5-minute chart and figure out the entry points. It can be seen how euro bulls are trying with all their might to regain control of the resistance of 1.1452, but nothing comes of it. After another unsuccessful attempt, a sell signal is formed. However, it also did not come to a major fall in the euro in the first half of the day. The downward movement was about 15 points – all intraday volatility. In the afternoon, several similar signals were formed, which showed a movement of 20+ points. 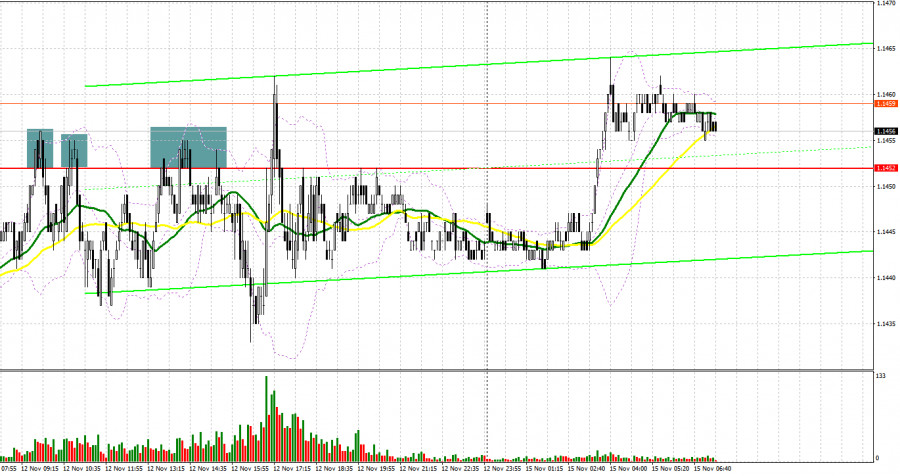 There are no important fundamental statistics on the eurozone today, but attention should be paid to the data on the foreign trade balance and the speech of European Central Bank President Christine Lagarde. Perhaps this will somehow shake up the market and lead to a surge in volatility. From a technical point of view, nothing much has changed compared to Friday, as the pair continues to be in a narrow horizontal channel. To return to the bull market during the European session, it is necessary to get beyond the new resistance of 1.1474, since only this scenario will stop the downward trend of the pair. The reverse test of 1.1474 from top to bottom after the publication of data on the eurozone will provide an entry point to long positions based on the growth of EUR/USD in the area of 1.1514. The fact that trading is conducted in the area of moving averages indicates the possibility of implementing such a scenario. A breakthrough of 1.1514 and a top-down test will lead to another buy signal and the pair will grow to a high like 1.1562, where I recommend taking profits. A more distant target will be the 1.1607 area. If the pressure on EUR/USD persists in the first half of the day, forming a false breakout in the 1.1435 area will limit the euro's fall and lead to forming a signal to open long positions, aiming for an upward correction. If traders are not active at 1.1435, it is best to wait for the formation of a false breakout in the area of 1.1379, but it is possible to open long positions on EUR/USD immediately for a rebound from the low like 1.1330, counting on a correction of 15-20 points within the day.

Bears control the market, but they can lose the initiative at any moment. It is very important to know what Lagarde will talk about today. If the ECB continues to adhere to the ultra-soft scenario, the pressure on the euro will remain. Therefore, all that bears need to do is to protect the 1.1474 level. The entire calculation in the first half of the day will be based on bad data on the eurozone and the formation of a false breakout at this level. This forms the first signal to open short positions, which will provide an excellent point to the market in order to fall to the support of 1.1435. A breakdown and test of this area from the bottom up will increase pressure on EUR/USD and lead to the demolition of a number of bulls' stop orders counting on a larger upward correction last Friday. This will open the way to new lows: 1.1379 and 1.1330. I recommend taking profits on short positions there. In case the euro grows during the European session and the bears are not active in the area of 1.1474, I advise you to postpone short positions until the test of the next resistance of 1.1514. But even there, it is best to open short positions after the formation of a false breakout. The best option for selling EUR/USD immediately on a rebound will be a high in the area of 1.1562. You can count on a downward correction of 15-20 points. 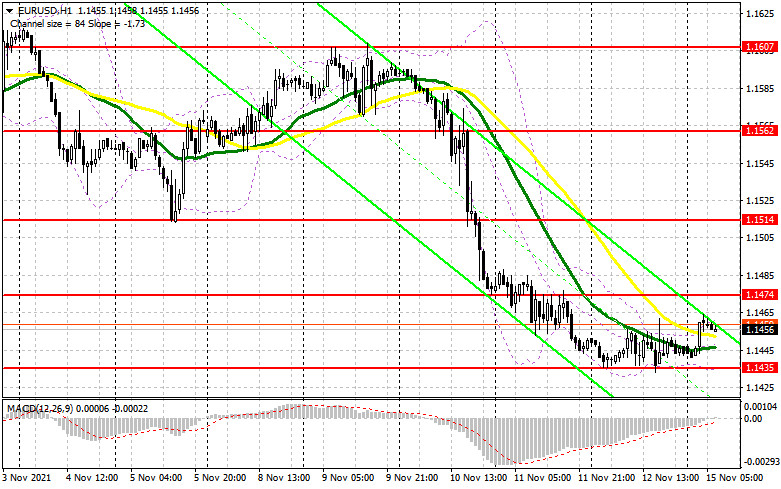 Trading is carried out in the area of 30 and 50 day moving averages, which jeopardizes the bearish trend.

The volatility is very low, so you shouldn't be guided by this indicator yet.

Interesting? Write a comment below.
 EUR/USD: plan for the European session on November 15. COT reports. The bears took a break. Euro trapped in the horizontal
Forward 
Backward 