EUR/USD: plan for the European session on November 16. COT reports. Euro collapsed against the US dollar. Bears aim for breakdown

Yesterday it was calm enough in the morning and did not bode well for trouble. Let's take a look at the 5 minute chart and see what happened. Very low volatility and the absence of important fundamental statistics led to a repetition of the Friday scenario - trading in a horizontal channel with an intraday movement of about 20 points. Several false breakouts at the level of 1.1435 formed a signal to buy the euro. However, it didn't come to its realization, and by the time of the release of the data on the US economy, the pair fell below this range, which led to losses. The fact that I did not wait for the reverse test of 1.1435 from the bottom to up did not allow me to enter short positions. The euro's fall stopped for some time in the support area of 1.1379, where I advised to buy. But a strong upward correction was not noted even there.

Before talking about the future prospects of the EUR/USD movement, let's look at what happened in the futures market and how the positions of Commitment of Traders have changed. The Commitment of Traders (COT) report for November 9 revealed that short positions decreased and long ones slightly increased, which led to the return of a positive delta. The fact of high inflationary pressure in the US continues to support the US dollar, as many investors are counting on an earlier increase in interest rates by the Federal Reserve next year and are already winning back the market in this direction - buying the US dollar. The statements of the representatives of the central bank, which have been heard recently, only confirm the expectations of market participants. At the same time, the president of the European Central Bank, Christine Lagarde, confidently insists that the ultra-soft monetary policy will not change even next year – this puts some pressure on buyers of risky assets who were counting on a more active recovery of the euro. In the near future, we will get acquainted with important data on retail sales in the United States and the unemployment rate in the eurozone, which will shed light on further actions of central banks to stimulate the economies of their countries. The latest November COT report indicated that long non-commercial positions increased from the level of 191,496 to the level of 192,544, while short non-commercial positions decreased from the level of 197,634 to the level of 188,771. At the end of the week, the total non-commercial net position became positive and amounted to 3,773 against -6,138. The weekly closing price decreased quite slightly, to the level of 1.1587 against 1.1599. 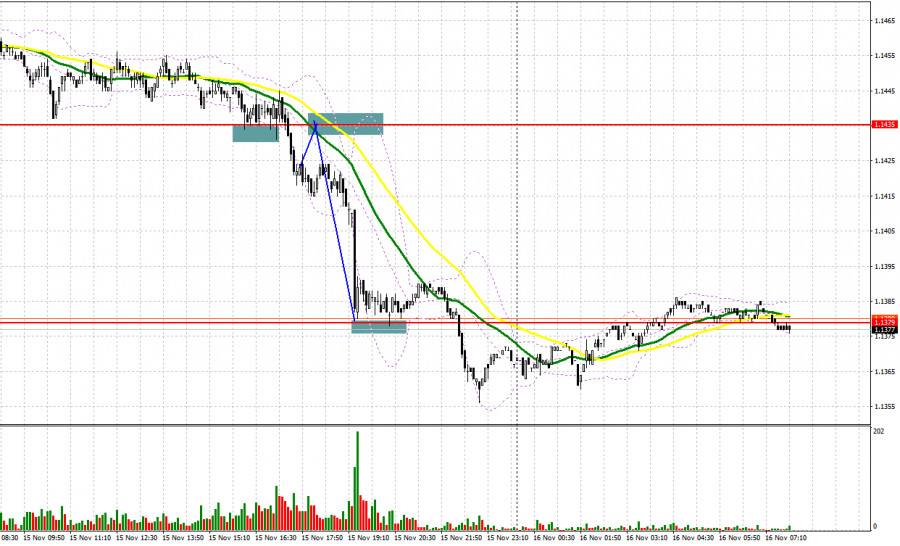 A fairly large number of fundamental statistics on the eurozone are being published today. Reports on the unemployment rate and GDP growth rate for the third quarter of this year will attract special attention. No less important will be the statistics on the consumer price index of Italy and France, as well as another speech by Lagarde, who with her statements can only worsen the euro's situation against the US dollar. If the European indicators turn out to be better than economists' forecasts– we will get a chance for an upward correction of EUR/USD in the first half of the day. Therefore, the initial task of the bulls is to consolidate above 1.1393. Only a breakthrough and a test of this area from top to bottom can form a signal to open long positions based on the pair's growth. In this scenario, an equally important goal is to regain control over the next resistance of 1.1423, where the moving averages are playing on the bears' side. A breakthrough of this range with a similar consolidation forms an additional entry point into long positions, which will lead EUR/USD to a local high of 1.1462, where I recommend taking profits. A more optimal option for buying would be a downward correction in the first half of the day to the support area of 1.1362 and the formation of a false breakout there. The divergence on the MACD indicator, which should remain at this point, will be another confirmation of the correct entry into the market against the trend. If bulls are not active at 1.1362, it is best to postpone long positions, since the market is in a major bearish trend. Only a false breakout at 1.1330 can form a new entry point based on the upward correction of the pair. I advise buying EUR/USD immediately for a rebound only after the first test of the 1.1295 low, or even lower - from the 1.1257 level, counting on an upward rebound of 15-20 points within a day.

The bears achieved their target yesterday and continued the pair's downward trend. Lagarde's speech may further put pressure on the market, which will lead to a weakening of risky assets. Bad data on the eurozone in the first half of the day will be the catalyst for a new fall in the euro. However, the most convenient entry point for short positions will be the formation of a false breakout at the level of 1.1393, which will lead the pair to the area of yesterday's support at 1.1362. A breakthrough and test of this area from the bottom up will increase the pressure on EUR/USD and open the way to the lows: 1.1330 and 1.1295. I recommend taking profits on short positions there. In case the euro grows during the European session and the bears are not active around 1.1393, I advise you to postpone short positions until the next resistance test at 1.1423. But even there, it is best to open short positions after the formation of a false breakout. The best option for selling EUR/USD immediately on a rebound will be the high around 1.1462. You can count on a downward correction of 15-20 points. 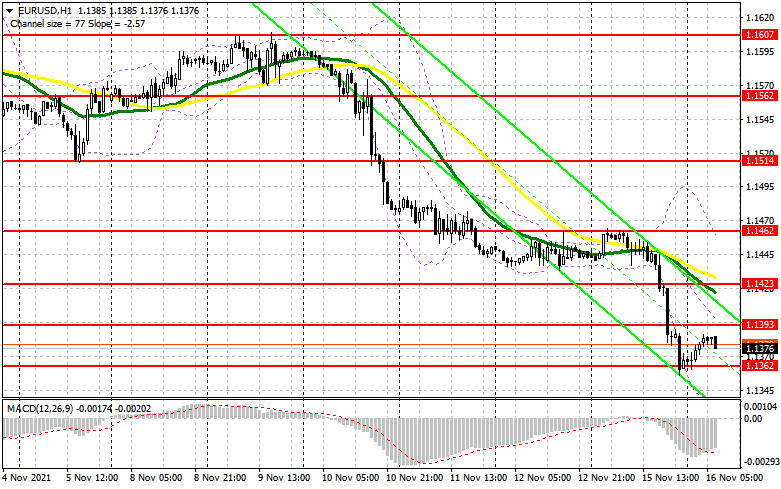 In case of growth, the upper border of the indicator in the area of 1.1450 will act as a resistance. In case of a decline, support will be provided by the lower border at 1.1330.

Interesting? Write a comment below.
 EUR/USD: plan for the European session on November 16. COT reports. Euro collapsed against the US dollar. Bears aim for breakdown
Forward 
Backward 