EUR/USD: plan for the European session on November 17. COT reports. The euro fell to another low. Aim for support 1.1257

Yesterday there were several signals to enter the market. Let's take a look at the 5 minute chart and see what happened. The eurozone data released in the first half of the day appealed to traders who managed to generate a signal to buy the euro. You can see how the bears are trying to break through 1.1362, but after a while the bulls very quickly regain control of this level, which generates a signal to open long positions according to the scenario that I described in detail in my forecast. The divergence, which continued to form after the renewal of yesterday's low, also benefited bulls. However, the pair did not go against the trend and the upward movement was about 15 points, after which the pressure on the euro returned. A breakthrough of the 1.1353 level in the afternoon and its reverse test from the bottom up formed an excellent entry point further along the trend, which led to a large sell-off in the euro by more than 30 points. 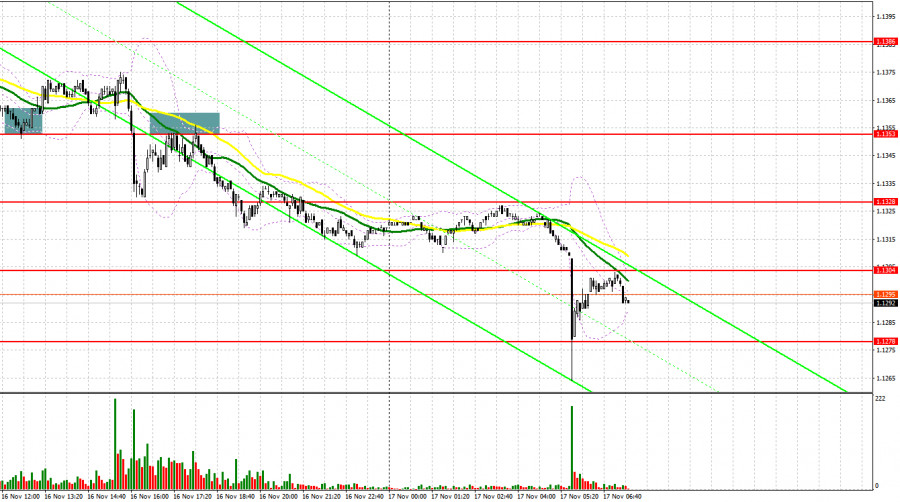 Statements made by representatives of the Federal Reserve on inflation in the US have strengthened the dollar's position, but today everything may change. The report on the consumer price index for the eurozone will be published in the European session, the growth of which may return the pair to strength, which will lead to an upward correction. The Eurozone Financial Stability Report can also help the bulls. All they need today is to protect the support at 1.1287. This will stop the bearish trend but will not lead to a correction. Forming a false breakout there will be the first signal to open long positions. However, for a real return to the bull market during the European session, it is necessary to get out of the resistance at 1.1324. The reverse test of 1.1324 from top to bottom after the release of data on the inflation jump in the eurozone in October this year will provide an entry point to long positions based on the growth of EUR/USD to the 1.1353 area, where the moving averages are similar, limiting the upward potential of the pair. A breakthrough of 1.1353 and a similar test from top to bottom will lead to another buy signal and growth to the 1.1386 area, where I recommend taking profits. The next target will be the area of 1.1421. If the pressure on EUR/USD persists in the first half of the day and the bulls are not active at 1.1287, it is best not to rush to buy against the trend, but wait for a false breakout to form in the 1.13257 area. It is possible to open long positions in EUR/USD immediately on a rebound from a low like 1.1222, or even lower - from 1.1193, counting on a correction of 15-20 points within the day.

The bears control the market, but today they can lose the initiative at any moment. As I noted above, everything can change due to the strong inflation data in the euro area and the change in rhetoric in the statements of the representatives of the European Central Bank. It is very important to find out what ECB President Christine Lagarde will talk about today after the release of the inflation report. If the ECB continues to adhere to the super soft scenario, the pressure on the euro will continue. Bears need to protect 1.1324. Forming a false breakout there creates the first signal to open short positions during the continuation of the downward trend, which will provide an excellent point with the goal of falling to the intermediate support at 1.1287. A breakdown and test of this area from the bottom up will increase the pressure on EUR/USD and lead to the demolition of a number of buy stop orders. This will open the way to new lows: 1.1257 and 1.1222. I recommend taking profits on short positions there. If the euro grows during the European session and the bears are not active around 1.1324, I advise you to postpone selling until the next resistance test at 1.1353. But even there, it is best to open short positions after the formation of a false breakout. The best option for selling EUR/USD immediately on a rebound will be a high around 1.1386. You can count on a downward correction of 15-20 points. 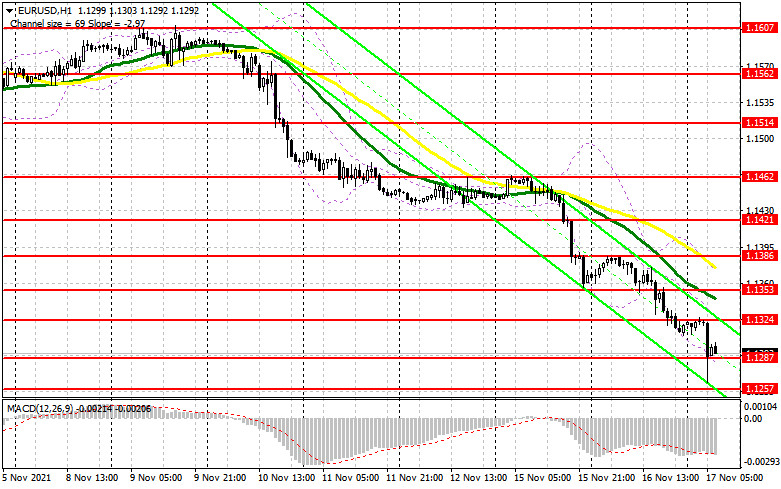 Trading is underway below the 30 and 50 daily moving averages, which indicates a continuation of the bear market.

Interesting? Write a comment below.
 EUR/USD: plan for the European session on November 17. COT reports. The euro fell to another low. Aim for support 1.1257
Forward 
Backward 