Quite a lot of signals to enter the market were formed yesterday. Let's take a look at the 5-minute chart and figure out the entry points. In my morning forecast, I paid attention to the 1.1337 level and advised you to make decisions based on it. An unsuccessful attempt by the bulls to break above 1.1337 led to the formation of a signal to open short positions, but I did not wait for a major fall in the pair. After moving down 15 points, the pressure decreased, and the bulls began to gradually return to the aforementioned range again. Good data on the US labor market did provide much help to the dollar, so after a breakthrough and downward test of the 1.1337 level, a good signal to buy the euro was formed in the afternoon. But the upward movement did not work the first time. And the bulls only managed to properly prove themselves after the second unsuccessful attempt of the bears to return to the 1.1337 level. The upward movement was around 40 points. 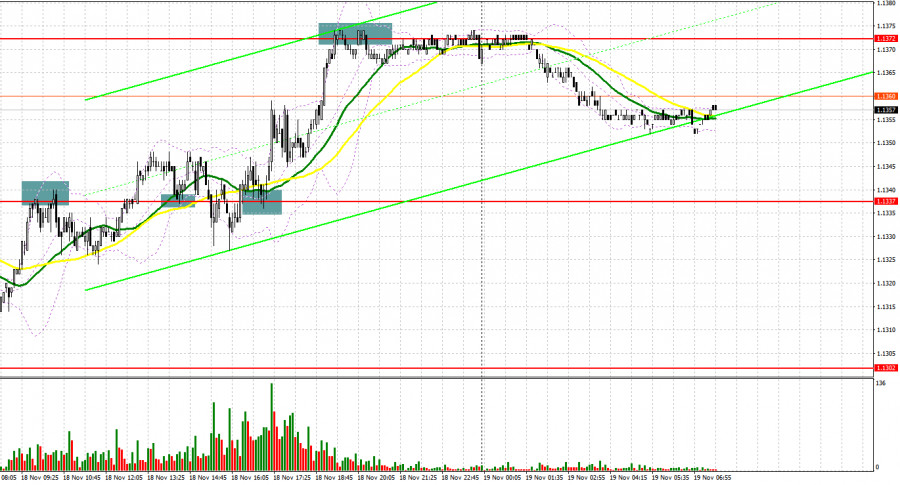 German producer prices are out today, and European Central Bank President Christine Lagarde is also speaking. It is unlikely that this will somehow significantly help the European currency to continue the upward correction, since there is no particular reason for a change in the ECB's policy, and our trend is clearly downward. Buying at current highs will not be the right decision. It is best to wait for a downward correction and be convinced of the presence of a large player in the 1.1338 area, from which yesterday one could observe the growth of the euro. Formation of a false breakout there will be the first signal to open long positions. However, to maintain the upward correction, it is necessary to update the daily highs and get out of the resistance at 1.1379. A reverse test of this level from top to bottom with strong data on producer prices in Germany will provide an entry point for long positions, counting on growth to the 1.1417 area. A breakthrough of this area with a similar test from top to bottom will lead to another buy signal and an increase in the euro to the 1.1462 area, where I recommend taking profits. If the pressure on EUR/USD returns in the first half of the day, and the trend remains downward, as well as the lack of activity of the bulls at 1.1338, where the moving averages pass, it is best not to rush into long positions. I advise you to wait for the formation of a false breakout in the area of the next support at 1.1302. It is possible to open long positions in EUR/USD immediately on a rebound from the low of 1.1267, or even lower - from 1.1222, counting on a correction of 15-20 points within the day.

Bears are starting to look closely at the market after yesterday's upward correction. I advise you to focus today on the resistance at 1.1379, since in our case, going beyond it is simply unacceptable. Lagarde's speech should cool the bulls' ardor, therefore, the formation of a false breakout at the level of 1.1379 will be exactly what bears need now. Unsuccessful consolidation above this range will lead to the formation of a signal to open short positions during the continuation of the downward trend. The next task is to break the support at 1.1338, where the moving averages are located, limiting the pair's downward potential in the short term. A breakdown and test of this area from the bottom up will increase the pressure on EUR/USD and lead to the demolition of a number of buy stop orders. This will open the way to new lows: 1.1302 and 1.1267. I recommend taking profits on short positions there. In case the euro rises during the European session and the bears are not active around 1.1379, I advise you to postpone short positions until the next resistance test at 1.1417. But even there, it is best to open short positions after the formation of a false breakout. The best option for selling EUR/USD immediately on a rebound will be the high around 1.1462. You can count on a downward correction of 15-20 points. 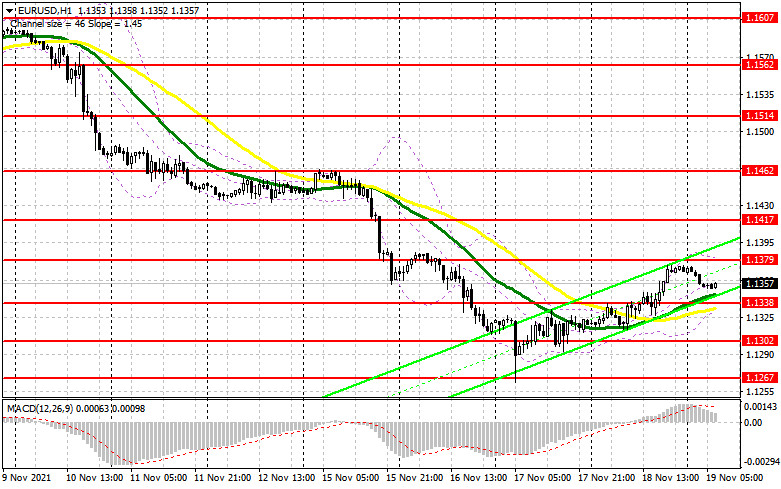 Trading is carried out above the 30 and 50 daily moving averages, which indicates an upward correction in the euro.