EUR/USD: plan for the European session on November 22. COT reports. Euro bears are back. Aim for breakthrough of 1.1267

The spread of coronavirus in the eurozone countries and the expected lockdown returned pressure on the euro on Friday. Against the background of high volatility, quite a lot of signals were formed to enter the market. Let's take a look at the 5-minute chart and figure out the entry points. A sharp and unexpected breakthrough of 1.1338 led to a rapid decline in EUR/USD on the bulls' stop orders counting on the pair's succeeding growth. However, it was not possible to wait for the formation of a convenient entry point on the reverse test of 1.1338 from the bottom up, so I was forced to skip this signal. Closer to the middle of the day, the bears managed to settle below 1.1302, and the reverse test of this level formed a good entry point further along the bearish trend. As a result, the downward movement amounted to more than 50 points. During the US session, euro bulls managed to regain control of the 1.1267 support, and the formation of a false breakout there resulted in creating an excellent buy signal, after which the euro rose by 40 points. The bulls also tried to regain the 1.1302 level, the test of which from top to bottom after the breakthrough gave another buy signal. However, after an increase of 20 points, the pressure on the pair returned by the end of the day. Consolidation below 1.1302 led to the formation of another entry point into short positions. 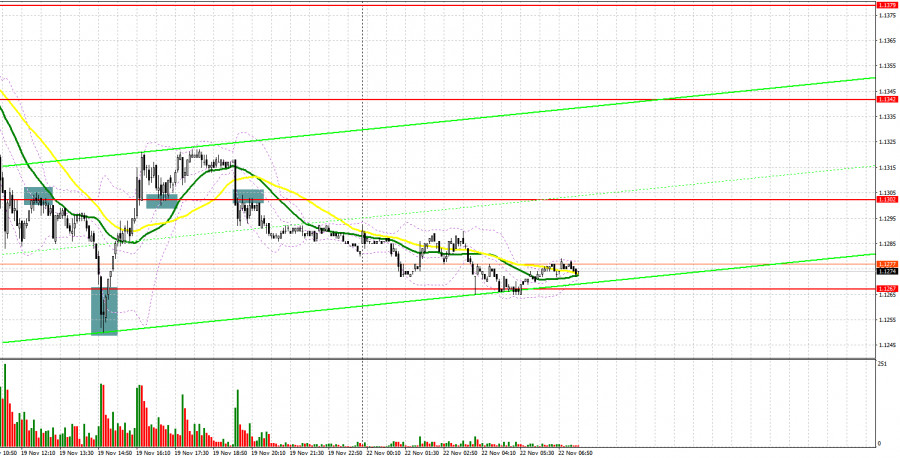 A number of data on Germany and the eurozone are coming out today, but they are unlikely to be crucial for the euro's direction. Apparently, the complication of the situation with coronavirus infection in the European Union will continue to put pressure on the pair. For this reason, I advise you not to rush into long positions. It is best to wait for a downward correction and a false breakout in the area of 1.1267. Only such a scenario will lead to the formation of the first entry point. Bigger players will show themselves only at the new low of 1.1222, which will be able to contain the pressure of the bears after updating last week's lows. The formation of a false breakout there will be an additional signal to open long positions. However, in order to return the upward correction, bulls need to get beyond the resistance of 1.1318, where the moving averages are playing on the bears' side. Strong data on the eurozone consumer confidence indicator may help with the implementation of such a scenario. However, only the reverse test of 1.1318 from top to bottom can provide an entry point to long positions in hopes of growth in the area of 1.1369. A breakthrough in this area with a similar top-down test will lead to another buy signal and growth in the area of 1.1417, where I recommend taking profits. In case of another large sale of EUR/USD in the first half of the day and the bulls are not active at 1.2222, I advise you to wait for the formation of a false breakout in the area of 1.1193. It is possible to open long positions on EUR/USD immediately for a rebound from a low of 1.1155, or even lower - from 1.1106, counting on a correction of 15-20 points within a day.

The bears took advantage of the panic and regained control of the market. Today, the primary task is to break through and consolidate below the 1.1267 level, which bears have repeatedly tested today during the Asian session. Weak data on the eurozone and the Bundesbank's monthly report may increase pressure on the pair, and a breakthrough and a reverse test of 1.1267 from the bottom up will lead to a new sell signal and a further sell-off to the area of the 1.1222 low. If we do not see bull activity at 1.1222, it is better to continue to increase short positions in order to further decrease to the lows: 1.1193 and 1.1155, where I recommend taking profits. In case EUR/USD grows this morning, I advise you to focus on the resistance of 1.1318, where the moving averages are playing on the bears' side. The formation of a false breakout at this level will be exactly what bears need right now. An unsuccessful consolidation above this range will lead to the formation of a signal to open short positions in continuation of the downward trend. In case the euro grows during the European session and the bears are not active in the area of 1.1318, I advise you to postpone short positions until the test of the next resistance of 1.1369. But even there, it is best to open short positions after the formation of a false breakout. The best option for selling EUR/USD immediately on a rebound will be a high in the area of 1.1417. You can count on a downward correction of 15-20 points. 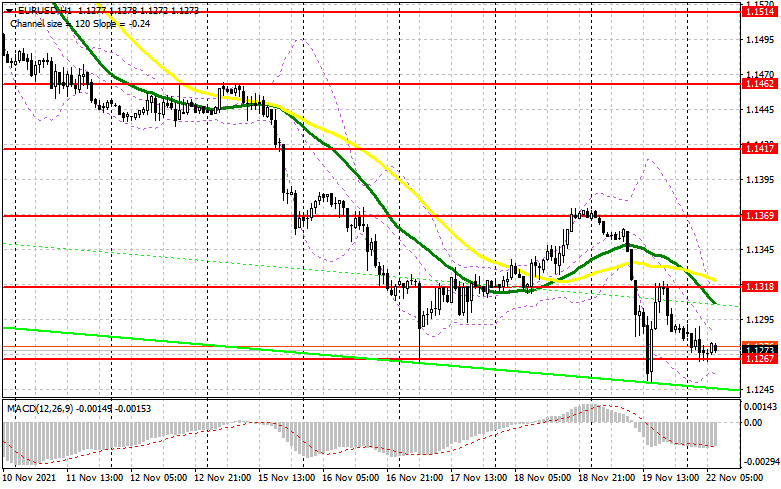 Interesting? Write a comment below.
 EUR/USD: plan for the European session on November 22. COT reports. Euro bears are back. Aim for breakthrough of 1.1267
Forward 
Backward 