EUR/USD: plan for the European session on November 25. COT reports. The ECB report is unlikely to help the euro. Thanksgiving

Yesterday only one signal to sell the euro was generated. Let's take a look at the 5 minute chart and see what happened. The euro was unable to settle at daily highs after a weak report from the IFO institute, which recorded a decline in the main indicators for the indicator of the German business environment and the indicator of economic expectations. A breakthrough and reverse test of the 1.1230 level from the bottom up formed an excellent signal to open short positions, after which the pair fell by more than 25 points. In the second half of the day, we did not manage to reach the 1.1182 level that I mentioned, to which literally 5 points were not enough. Because of this, a signal to buy the euro also did not work. 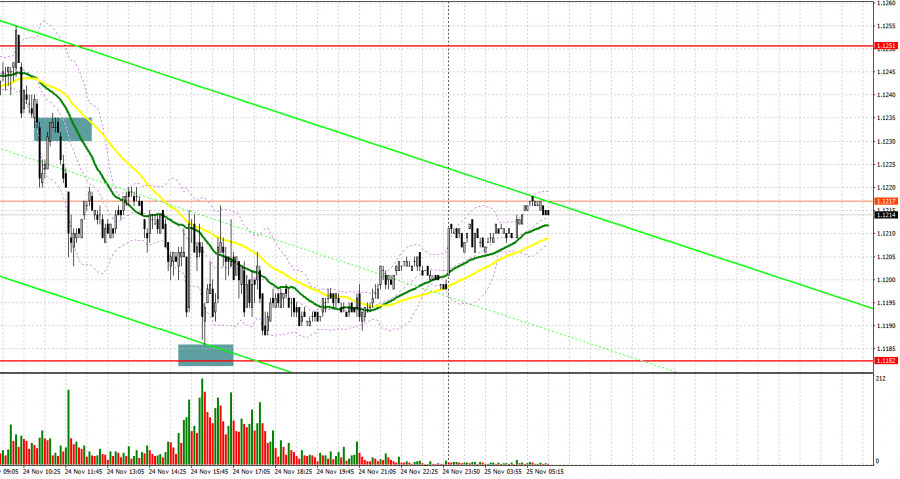 An important report on German GDP for the third quarter of this year will be released this morning. Economic growth rates are expected to remain unchanged, so it is not entirely correct to expect the data to support the euro. No less important will be the European Central Bank's report from the last meeting on monetary policy. However, the central bank's soft stance on monetary policy will also do little to help euro bulls. In the first half of the day, the bulls need to be vigilant and protect the immediate support at 1.1188. Only the formation of a false breakout there will lead to creating the first point of entry into the market against the downward trend observed this week. The main goal is a return to the resistance of 1.1234, which was formed at the end of yesterday and where the moving averages are, limiting the pair's upward potential. Breaking through this area will be an equally important task for the bulls. The downward test of 1.1234 will provide an excellent entry point to the market with the goal of pushing the euro to the 1.1273 and 1.1317 areas. The next target will be the 1.1359 high, where I recommend taking profits. In case EUR/USD falls to 1.1188 and we receive weak fundamental statistics for Germany, it is best not to rush to buy. I advise you to wait for the pair's next fall and the formation of a false breakout at a new low like 1.1155. You can open long positions in EUR/USD immediately on a rebound from 1.1118, or even lower - from 1.1081, counting on a correction of 15-20 points within the day.

The bears are still in control of the market, although they have loosened their grip during today's Asian session. If traders do not find anything in the ECB's minutes that could somehow restore confidence in the change in interest rates in the near future, the pressure on the euro will grow. The most optimal scenario for opening short positions will be the formation of a false breakout in the resistance area of 1.1234, where the moving averages are passing, limiting the pair's upward potential. With this scenario, the bears' target will be a breakthrough and consolidation below the level of 1.1188, which was not done yesterday even against the backdrop of strong fundamental statistics on the US. Disappointing data on German GDP may help the bears play this scenario, and a reverse test of 1.1188 from the bottom up will lead to a signal to sell the euro with the prospect of a decline to the 1.1155 area. The next target will be the support at 1.1118, where I recommend taking profits. Keep in mind, however, that Thanksgiving and exchanges will be closed in the US today, which will limit volatility and affect trading volume. If the euro grows and the bears are not active at 1.1234, it is better to wait with short positions. The optimal scenario will be short positions when a false breakout is formed around 1.1273. You can open short positions immediately on a rebound from the highs: 1.1317 and 1.1359, counting on a downward correction of 15-20 points. 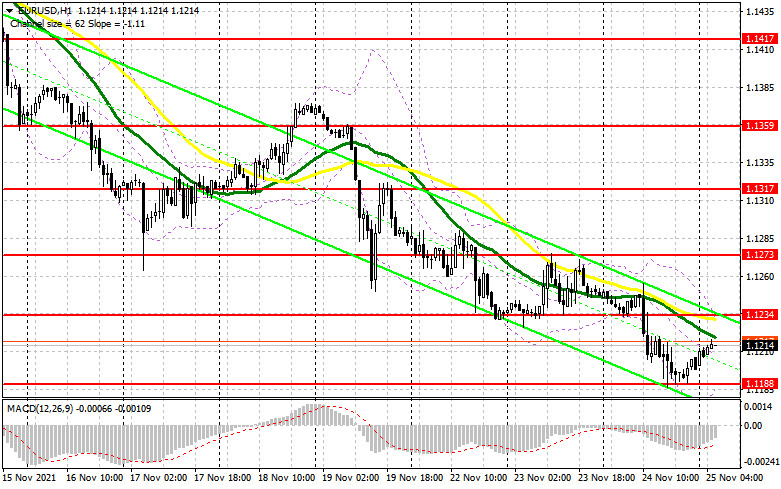 The Commitment of Traders (COT) report for November 16 revealed that both short and long positions increased. However, there were more of the former, which led to the return of the negative delta. And although it continues to balance in one range near the zero mark for quite a long time, this does not help euro bulls in any way. The risk of another surge in the spread of coronavirus and the lockdown of the EU countries has led to a return of pressure on the European currency, which has not yet managed to recover from the continuation of super-soft monetary policy by the European Central Bank, even against the backdrop of inflationary growth. Judging by what is happening, the ECB leaders have taken a fairly correct position. Austria has already returned to quarantine restrictions and strict isolation measures, and the German authorities are considering this - a very strong signal for the further weakening of the euro against the dollar. Meanwhile, in the US, the fact of high inflationary pressure continues to support the US dollar. Many investors are counting on an earlier increase in interest rates from the Federal Reserve next year and are already winning back the market in this direction. The latest November COT report indicated that long non-commercial positions rose from 192,544 to 198,181, while short non-commercial positions also jumped from 188,771 to 202,007. By the end of the week, the total non-commercial net position regained its negative value and amounted to -3,826 against 3,773. The weekly closing price dropped significantly, to the level of 1.1367 against 1.1587.

Trading is carried out below the 30 and 50 daily moving averages, which maintains a downward trend for the pair.

Interesting? Write a comment below.
 EUR/USD: plan for the European session on November 25. COT reports. The ECB report is unlikely to help the euro. Thanksgiving
Forward 
Backward 