EUR/USD: plan for the European session on November 18. COT reports. Euro bears take a break, but pressure may return

Yesterday there were several signals to enter the market. Let's take a look at the 5 minute chart and see what happened. The data on the eurozone consumer price index released in the first half of the day coincided with economists' forecasts, which had practically no effect on the European currency, which, having won back all the morning decline, stopped at the daily highs. I did not wait for signals to enter the market due to the fact that the nearest support and resistance levels were not updated. In the second half of the day, one could observe the formation of a false breakout in the area of resistance at 1.1324, which resulted in forming a good signal to sell the euro further along the trend. The downward movement was about 30 points. A similar situation at the level of 1.1324 occurred towards the end of the US session, however, I did not wait for a major drop there. 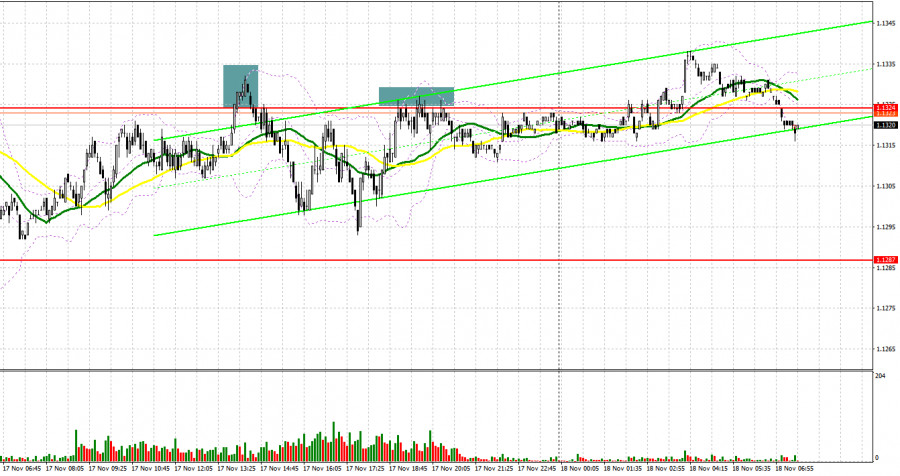 Today there are no important fundamental statistics in the first half of the day, so most likely the bears will try to probe the market in order to continue the downward trend. It is unlikely that the statements of European Central Bank executive board member Fabio Panetta will somehow affect the pair's direction, so only the protection of the 1.1302 support will stop the bearish trend. Forming a false breakout there will be the first signal to open long positions. However, for a real return to the bull market during the European session, it is necessary to get out of the resistance at 1.1337, formed at the end of yesterday. A reverse test of this level from top to bottom will provide an entry point to long positions, counting on the growth of EUR/USD to the 1.1374 area. A breakthrough of this area with a similar test from top to bottom will lead to another buy signal and growth to the 1.1417 area, where I recommend taking profits. If the pressure on EUR/USD persists in the first half of the day, and the trend remains downward, as well as the lack of activity of the bulls at 1.1302, it is best not to rush into long positions. I advise you to wait for the formation of a false breakout in the area of the next support 1.1267, which is this week's low. It is possible to open long positions in EUR/USD immediately on a rebound from the low of 1.1222, or even lower - from 1.1193, counting on a correction of 15-20 points within the day.

The bears seem to control the market, but they are not very active. The fact that the pair is in the area of the moving averages indicates the prerequisites for a reversal and an upward correction - therefore, be very careful with short positions. Although the ECB has no reason to change its policy, as Panetta can remind us today, the euro is oversold enough and a respite is needed. The most optimal selling scenario will be forming a false breakout at the level of 1.1337, which will form the first signal to open short positions during the continuation of the downward trend. The primary target will be the intermediate support of 1.1302. A breakdown and test of this area from the bottom up will increase the pressure on EUR/USD and lead to the demolition of a number of the bulls' stop orders expecting a correction in the near future. This will open the way to new lows: 1.1267 and 1.1222. I recommend taking profits on short positions there. In case the euro grows during the European session and the bears are not active around 1.1337, I advise you to postpone short positions until the next resistance test at 1.1372. But even there, it is best to open short positions after the formation of a false breakout. The best option for selling EUR/USD immediately on a rebound will be a high around 1.1417. You can count on a downward correction of 15-20 points. 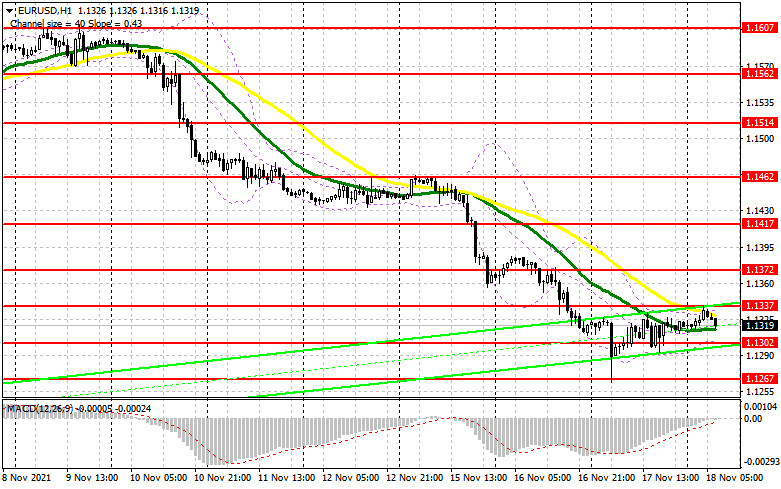 Trading is carried out in the area of 30 and 50 daily moving averages, which indicates some uncertainty with the future direction of the pair.