EUR/USD. Preview of the new week. The most boring week in which the dollar will try to maintain its advantage 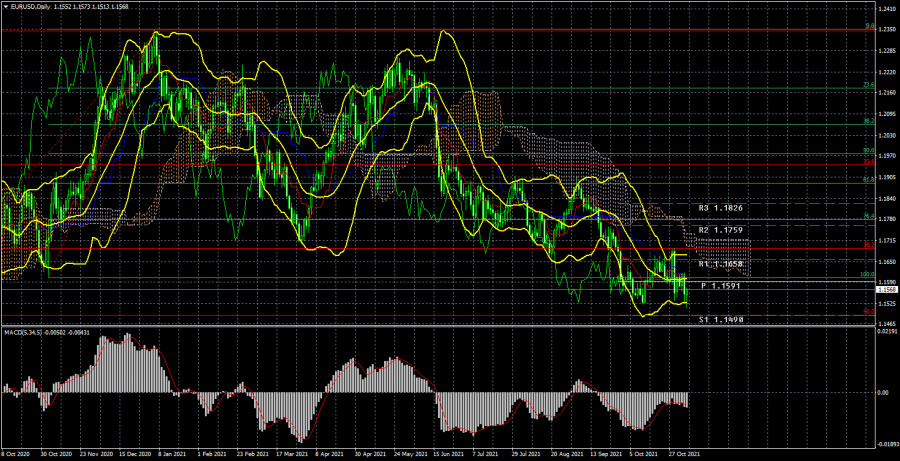 The European currency paired with the US dollar last week generally continued its downward movement and even updated its local minimum. The downward trend was also maintained after the European currency attempted to start a new upward trend after the ECB meeting the week before last. Thus, at this time, the price simply continues to be near its local lows, which are also annual lows. Therefore, the technical picture has hardly changed compared to the previous week. The European currency remains under market pressure, although the fundamental background has been and remains very contradictory. This is expressed by the fact that many fundamental events can be interpreted in absolutely different ways. For example, the recent meetings of the Fed and the ECB. The ECB has made it clear that it is ready to gradually curtail the PEPP program. However, everything will depend on the coronavirus pandemic, which has re-captured the European Union in recent months. At the same time, Christine Lagarde also made it clear that there is no talk of raising the rate even in 2022. At the same time, the Fed began to wind down its QE program, but it has already hinted several times that rates may start to rise next year. At first glance, the Fed has taken a more "hawkish" position, which should support the dollar. However, all the decisions taken by the Fed have long been known to the market, and they did not come as a surprise to it. The market has been waiting for QE to be curtailed for a long time, as inflation continues to rise and threatens to reach maximum levels in 30 years. Experts have long been sounding the alarm about rising prices and inflating the money supply, which leads to overheating of the economy and inflating "bubbles" in financial and commodity markets. Many are waiting for these "bubbles" to burst because the trillions of dollars printed by the Fed cannot pass unnoticed and without a trace for the economy. Thus, the US dollar remains in the risk zone, despite the tightening of monetary policy and a possible increase in rates.

What awaits us next week? By and large, nothing. The calendar of macroeconomic events of the European Union is empty, except for the index of business sentiment from the ZEW Institute, which will be released on Monday. In the States, the situation is a little more interesting. Thus, during the whole week, traders will have almost nothing to pay attention to. This means that the volatility may again decrease to the standard 40-50 points per day and significantly complicate the pair's trading. As for the direction of movement, with such volatility in five trading days, quotes can rise or fall by 80-100 points. And this is provided that they will move in one direction. And if so, then we do not expect strong changes in the euro/ dollar exchange rate.

From our point of view, the correction against the global upward trend continues at the moment. We have repeatedly drawn the attention of traders to the fact that a couple of years ago, the global downward trend, which lasted about 8 years, supposedly ended. Since everything in the economy is cyclical, it can be assumed that the global upward trend continues now, which may last another 4-5 years. Then the pair can continue to grow in the long term, as fundamental factors still do not speak in favor of the dollar, and the markets are still not eager to invest headlong into the US currency. Therefore, we still expect that the quotes will initially rise to the Senkou Span B line, near which the following question will be solved: a new upward trend or a new round of corrective movement? Given that the correction for the pair has been going on for 10 months, we may see another round of downward movement.

Next week, new speeches by the heads of the central banks of the EU and the US, Christine Lagarde and Jerome Powell, are also possible. The information from them may be interesting. However, it is unlikely that it will differ much from the information that the markets already own. The heads of the Central Bank simply cannot share information with traders and investors every week that they do not yet know. This means that it is unlikely that Powell or Lagarde will be able to change the global mood of traders, which currently remains as neutral as possible. This is evidenced by COT reports, which show that now professional players have approximately an equal number of buy and sell contracts open. 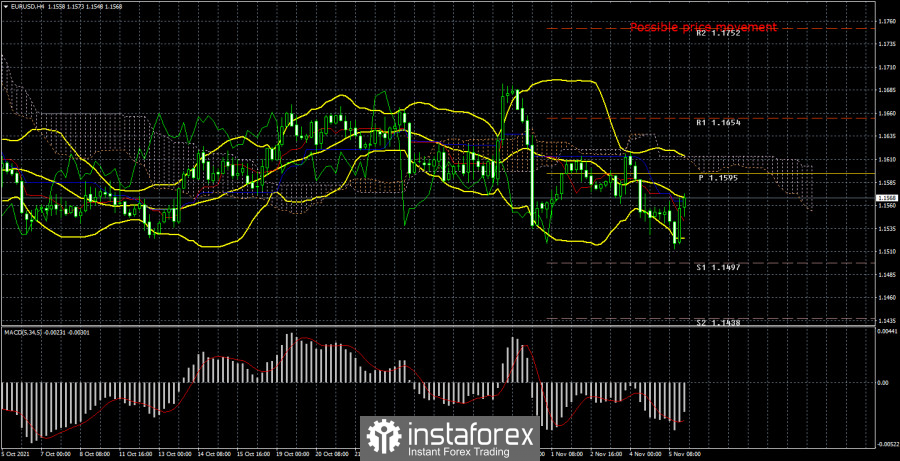 The technical picture of the EUR/USD pair on the 4-hour chart is also as ambiguous as possible. There is no trend on the 4-hour timeframe, which is visible even to the naked eye. Therefore, the lines of the Ichimoku indicator currently carry little information, since this is a trend indicator. But at the same time, there is no flat at the moment. Rather, this movement can be called a "swing". And in such conditions, it is very difficult to trade a pair for a short time. Thus, either you should switch to the minimum TF and trade by levels, or you should work for a long time, but there are no corresponding signals for this yet. Therefore, we need to wait for the formation of these signals and wait for the volatility to increase and will be at least 60-80 points per day.

Interesting? Write a comment below.
 EUR/USD. Preview of the new week. The most boring week in which the dollar will try to maintain its advantage
Forward 
Backward 