FOMC meeting is in focus. Surprises are not excluded. Overview of USD, CAD, and JPY

Today's main event will be the FOMC meeting, at which the Fed is expected to announce a reduction in QE asset purchases. It is predicted that the reduction will begin immediately, particularly in November, at a rate of $15 billion per month with risks of a faster QE decline.

There are still optimistic expectations, the US and European stock indexes are at historic highs, and volatility is low. The most likely solution has already been considered by the markets, but the surprise factor may cause an increase in demand for the US dollar if the Fed offers a faster schedule for exiting QE or adjusts market expectations for rates.

The main factor affecting the outlook of the Canadian dollar is the market's belief that the Bank of Canada will act more quickly than the Fed. The Bank of Canada has officially stopped all net purchases of new bonds, while the Fed is expected to announce this only today. Traders are waiting for the initial rate hike from January to March 2022 and are preparing for four more increases during the rest of 2022. As for the Fed, the forecast is as follows – the first increase is not earlier than April 2022 and another increase before the end of the year.

The limiting factor is that the ahead schedule relative to the Fed may lead to an excessively rapid strengthening of the CAD, while Canada is largely dependent on exports to the United States in terms of growth rates. Accordingly, the strengthening of the Canadian dollar from fundamental positions looks absolutely reasonable, but the financial authorities of this country will restrain this strengthening.

According to the CFTC report, weekly demand for CAD amounted to 1.152 billion. A long position was formed, and steady demand for the Canadian in accordance with market trends supports bearish pressure on the USD/CAD. The settlement price continues to decline rapidly. 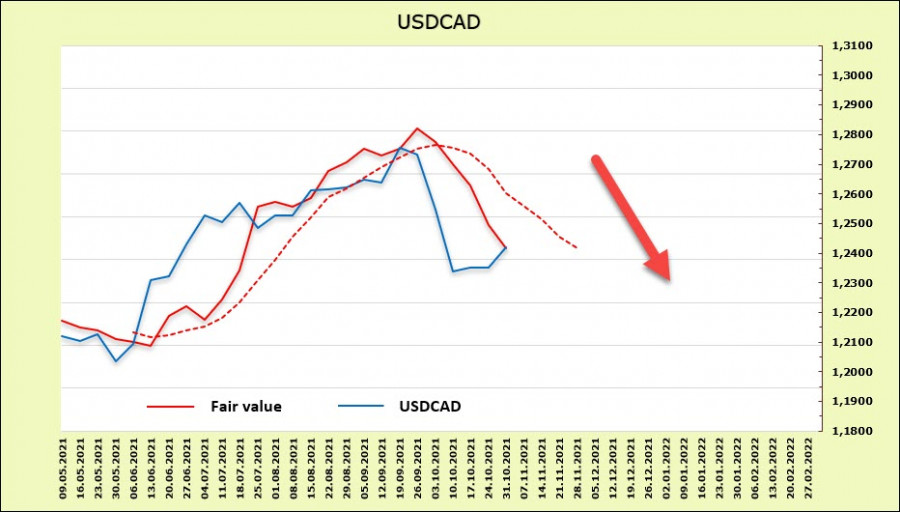 It can be assumed that the main downward trend in USD/CAD remains the most likely development of events. The current upward pullback shows signs of correction and growth may continue to the level of 1.2440, then the resistance zone 1.2520/40. The chances of leaving higher still look illusory, so it is logical to use growth attempts for sales. The targets are located at 1.2284 and 1.2250.

Until recently, it seemed that the Japanese economy was emerging from a long period of uncertainty caused by repeated waves of COVID-19, but the latest data looks unconvincing. The consumer price index in the Tokyo area in October rose by only 0.1% yoy, against the forecasted 0.5% yoy. But apparently, Japan was finally approaching the long-awaited victory over deflation. Industrial production in September decreased by 5.4% mom, or 2.3% yoy, which cannot also be considered a positive trend.

Of course, there are good chances that inflation will rise since it will not be easy to stop the rise in resource prices in the near future. Much will depend on the stability of demand in the US and China, which account for 44% of Japanese exports.

The Bank of Japan is likely to continue to maintain an ultra-soft policy longer than other central banks. At the last meeting on October 28, the central bank kept the discount rate at -0.1% and continued "quantitative and qualitative monetary policy easing (QQE) with yield curve control", which supports the yield of 10-year JGB at about 0% due to the purchase of government bonds of the Bank of Japan.

And since the growth of UST yields is perceived by the markets as a done deal, the dynamics of the yield spread will clearly not be in favor of the yen.

The Japanese yen's net short position surged over the reporting week by 493 million and reached -11.720 million, which is a very strong bearish advantage. Thus, speculators in the USD/JPY pair do not leave the yen any chance in the long term. The estimated price goes up. 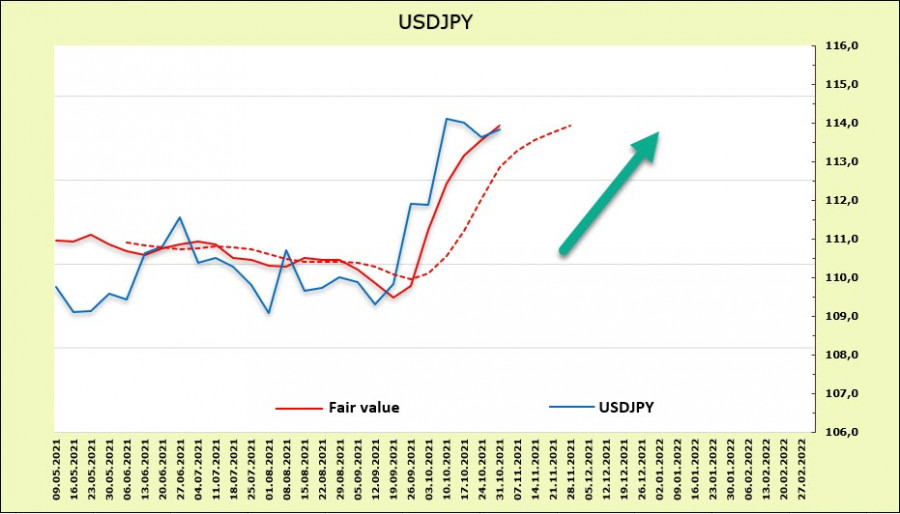 It can be assumed that the exit from the consolidation zone will occur towards the upside, with the nearest target of 114.30/40, then 114.70, 118.70. A sharp demand for protective assets can hinder growth, which in the current conditions, will mean a high probability of another wave of a financial crisis.

Interesting? Write a comment below.
 and JPY, CAD, FOMC meeting is in focus. Surprises are not excluded. Overview of USD
Forward 
Backward 