Forecast and trading signals for EUR/USD on November 18. Detailed analysis of the pair's movement and trade deals. Euro fell 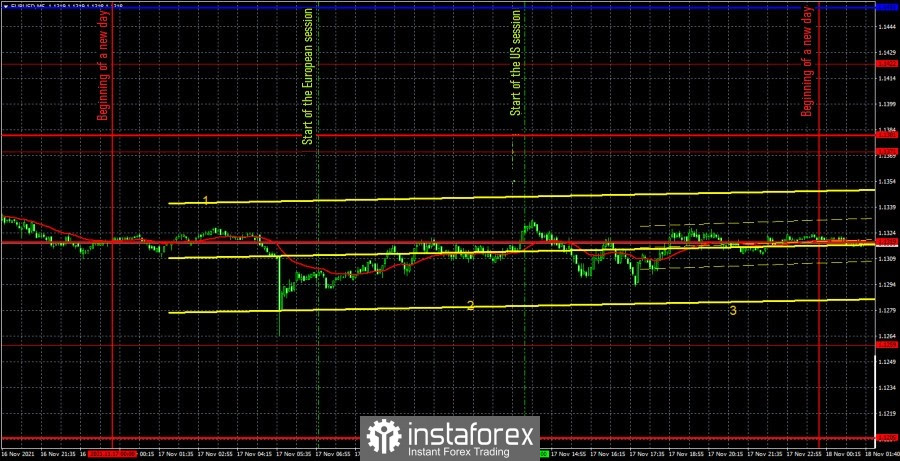 The EUR/USD pair continued to move in a mode close to a flat on Wednesday. Despite the fact that the downward movement is clearly visible on the higher timeframe, on the 5-minute timeframe, the pair spent the entire European and US sessions in a horizontal channel 40 points wide. Thus, the pair showed their favorite type of movement on Wednesday. We do not deny that in the last week the pair has been showing trending movement and good volatility, but this judgment does not apply to the environment. It should also be noted that at this time the quotes are at those levels that it has not been in for a whole year. Therefore, in principle, there are very few extreme levels in this area. And since there are few levels, then there are few trading signals. None of them were formed on Wednesday. However, this is not surprising, given the nature of the movement and the almost complete absence of macroeconomic statistics. Another speech by European Central Bank President Christine Lagarde took place at night, after which the European currency collapsed again. Even if you do not know what exactly Lagarde was talking about, it can be assumed that her rhetoric remained dovish. Thus, a trade was not opened on Wednesday, and the pair continues to remain close to its annual lows and may resume falling at any time. By the way, a report on inflation in the European Union was published yesterday, but, as we warned in the last review, there was no reaction to it, since this was the second, final estimate for October. Thus, the markets were fully prepared for the value of 4.1% y/y. 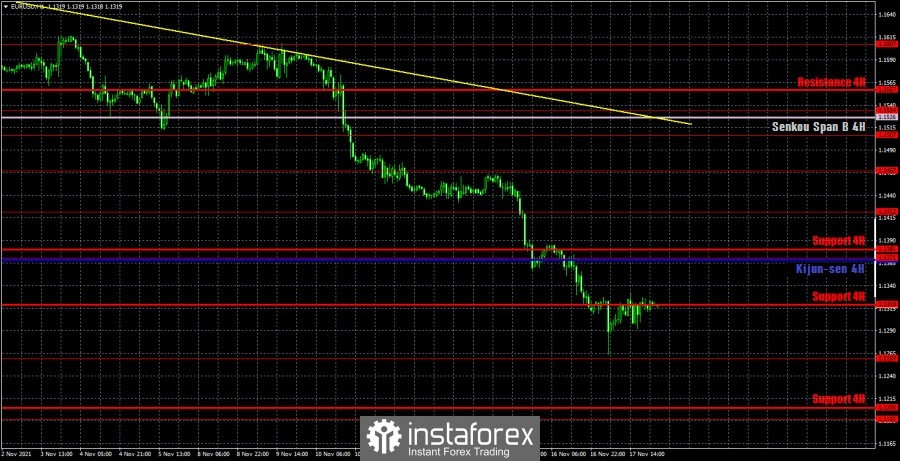 On the hourly timeframe, the downtrend persists and does not cause any doubts at this time. The downtrend line is far enough from the price to make it possible for the pair to correct as it pleases without prejudice to the current downward trend. And a kind of correctional movement began yesterday. The European currency is rising very reluctantly. Or volatility is very weak again. One way or another, the continuation of the correction is now a preferable option. We highlight the following levels for trading on Thursday - 1.1192, 1.1259, 1.1371, 1.1422, as well as the Senkou Span B (1.1526) and Kijun-sen (1.1370) lines. The Ichimoku indicator lines can change their position during the day, which should be taken into account when looking for trading signals. Signals can be rebounds or breakthroughs of these levels and lines. Do not forget about placing a Stop Loss order at breakeven if the price moves 15 points in the right direction. This will protect you against possible losses if the signal turns out to be false. On November 18, the only thing that traders can turn their attention to is the report on claims for unemployment benefits in the United States. However, this report is frankly secondary, therefore with a 90% probability it will not cause any reaction from the markets. Therefore, the pair may continue to correct today.

Overview of the EUR/USD pair. November 18. The European Central Bank continues to push for the euro.

Overview of the GBP/USD pair. November 18. Britain urges the EU not to start a trade war.

Forecast and trading signals for GBP/USD for November 18. Detailed analysis of the movement of the pair and trade deals. 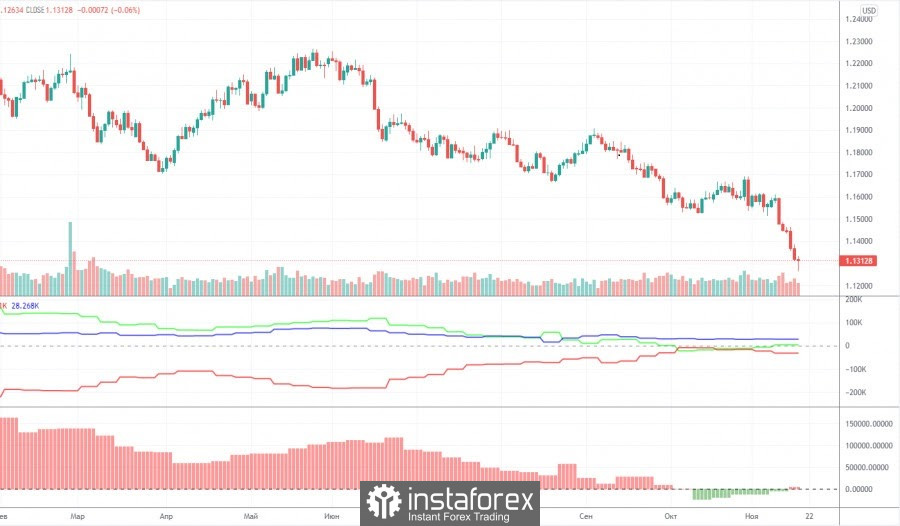 The mood of non-commercial traders changed during the last reporting week (November 2-8). A group of "non-commercial" traders closed 11,000 sell contracts (shorts) and 1,500 buy contracts (longs) during the week. Thus, the net position for professional traders increased by 10,000, which is not a lot and not a little. It should be noted that the changes in the mood of major players have been minimal lately, however, there is a clearly visible tendency according to which non-commercial traders are raising short positions, and long positions for commercial ones. Let me remind you that the non-commercial players determine the mood of the market and the possible direction of movement of a particular currency. Consequently, since the mood of the major players has been becoming more and more bearish for more than half a year, the euro has excellent chances to continue falling. The main thing is that now the data of the Commitment of Traders (COT) reports at least coincide with what is happening on the market, which makes it possible to assume further changes in the value of the euro. Also note that at this time the number of longs in the non-commercial group is still greater than the number of shorts. Thus, the net position is positive and the mood is characterized as "formally bullish". And it should also be noted that in the last few weeks, the green line has been growing at the first indicator (net position of non-commercial traders). If the downward trend persisted, this line would continue to decline. Therefore, a further fall in the euro currency is still not obvious, but very likely.