Forecast and trading signals for EUR/USD on November 3. Detailed analysis of the pair's movement and trade deals. Total flat 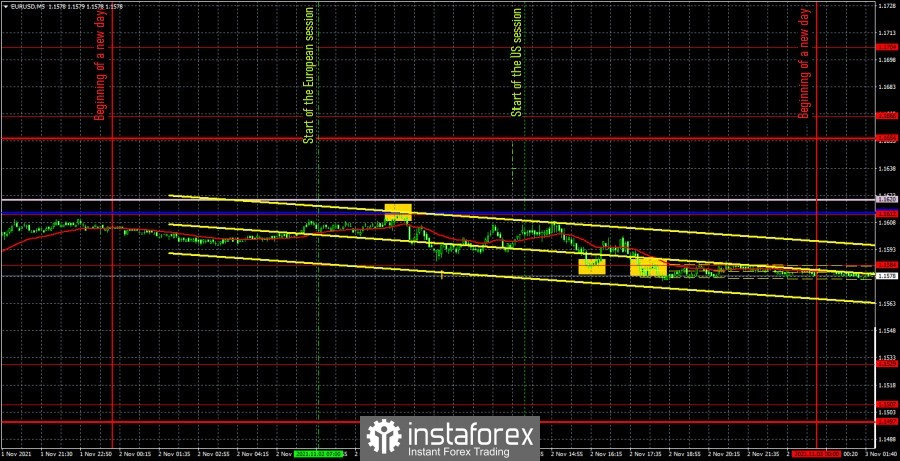 The EUR/USD pair showed volatility equal to 40 points on Tuesday. That is how much the pair passed during the entire Asian trading session, European and US. Needless to say, such a movement is called not just "flat", but a "total flat"? No important macroeconomic reports released in either the United States or the European Union on Tuesday. Thus, traders, in fact, had nothing to react to during the day. A single report on business activity in the manufacturing sector of the eurozone (figure "1" in the chart) did not provoke any reaction, as its value did not differ from the forecast. It should also be noted that on the eve of the day when the results of the Federal Reserve meeting will be announced, the markets did not find any reason to trade actively. This means that they prefer not to force things or take unnecessary risks. Although in the case of the euro/dollar pair, the markets have not been taking unnecessary risks for several consecutive months. All that remains for us is to analyze all the trading signals that were generated during the past day. Fortunately, there were few of them. The first signal - to sell - was formed at the beginning of the European session, when the price bounced off the critical line of the Kijun-sen. Subsequently, the price managed to fall about 20 points and even reach the nearest target extremum level of 1.1584. It was the rebound from this level that allowed to close the deal in profit of about 12 points. However, with such "crazy" volatility, it was possible, in principle, not to enter the market. A short position could also be closed in zero profit if traders set Stop Loss to breakeven after 15 points down, according to our recommendations. In any case, either no profit or minimal profit. A buy signal from the level of 1.1584 could also be worked out with a buy trade, but it did not bring profit, since the price went below this level a little later, "eating" the profit on the first trade. 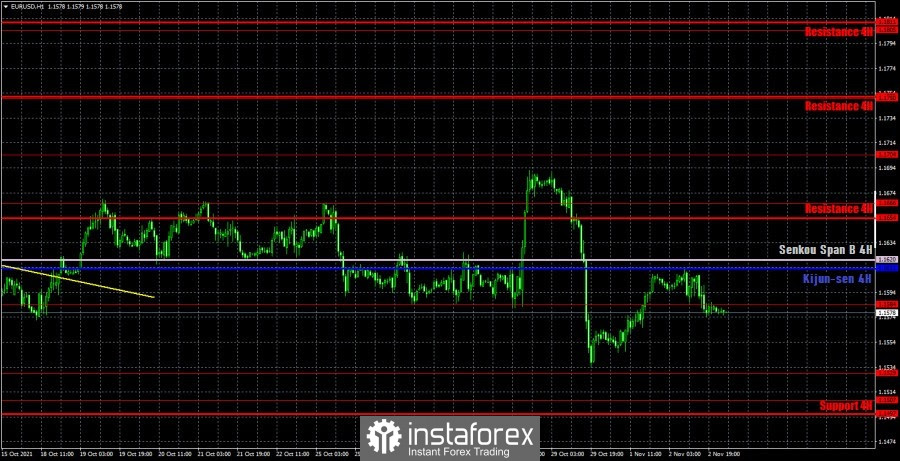 The hourly timeframe also clearly shows that the euro/dollar pair was in absolute flat on Tuesday and practically did not move. However, in addition to this, the chart above clearly shows the absence of a trend. Not just the absence of a trend line or channel, but the absence of even a horizontal channel. That is, now neither flat nor trend have formed for the pair. This is an absolutely confusing situation and, given the macroeconomic and fundamental background this week, it is unlikely that it will become clearer. We highlight the following levels for trading on Wednesday - 1.1507, 1.1529, 1.1584, 1.1666, 1.1704, as well as the Senkou Span B (1.1620) and Kijun-sen (1.1613) lines. The Ichimoku indicator lines can change their position during the day, which should be taken into account when looking for trading signals. Signals can be rebounds or breakthroughs of these levels and lines. Do not forget about placing a Stop Loss order at breakeven if the price moves 15 points in the right direction. This will protect you against possible losses if the signal turns out to be false. The European Union will publish the unemployment rate, and European Central Bank President Christine Lagarde will give a speech. The results of the Fed meeting will be announced in America, and during the day - the ADP report on the state of the labor market, as well as the index of business activity for the ISM services sector. Both of these reports, under certain circumstances, can cause a reaction from the market, as they are "relatively important".

Overview of the EUR/USD pair. November 3. Will the Fed surprise the markets? What to expect from the Fed meeting?

Overview of the GBP/USD pair. November 3. France changed its mind to develop a "fish conflict" with Great Britain.

Forecast and trading signals for GBP/USD for November 3. Detailed analysis of the movement of the pair and trade deals. 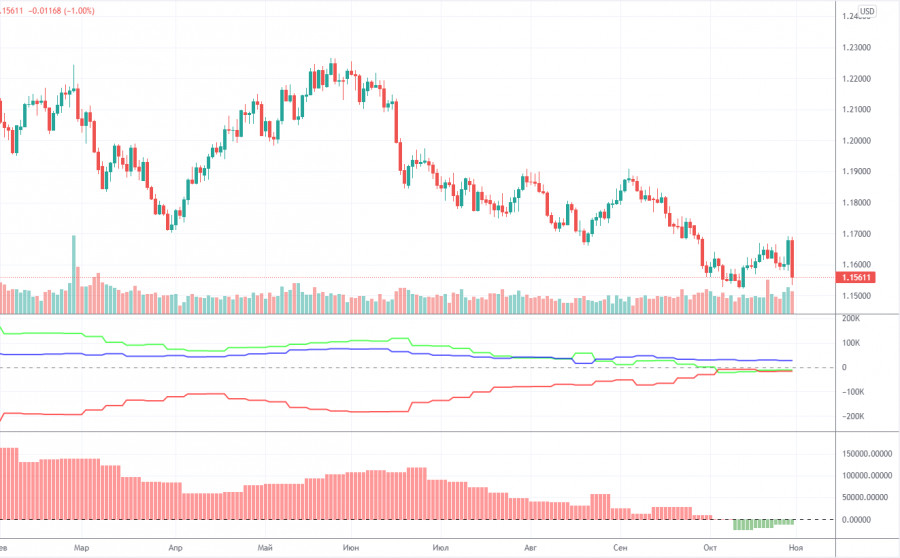