Forecast and trading signals for GBP/USD for November 15. Detailed analysis of the movement of the pair and trade deals. 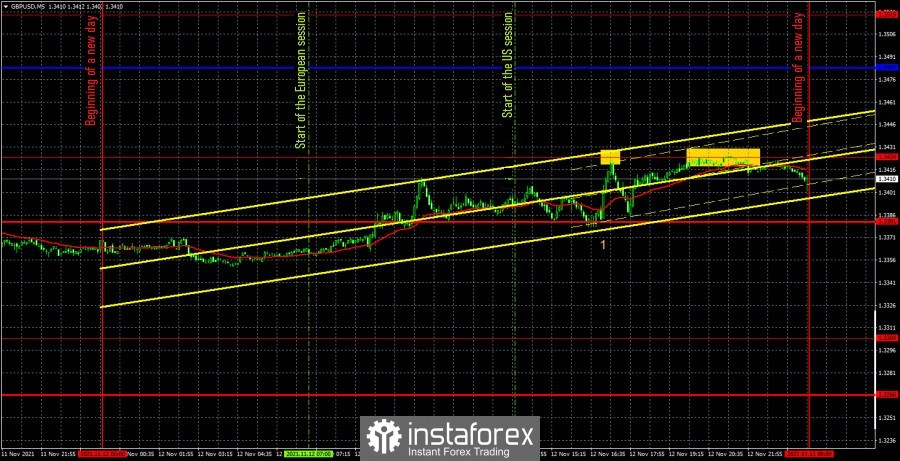 The GBP/USD pair traded rather weakly on November 12. Although the price passed about 70 points, the movement itself was quite strange, with sharp reversals and a very weak intraday trend. As in the case of the euro/dollar pair, it is very good that only two trading signals were formed during the day, one of which was immediately dismissed due to the fact that it was formed almost at the close of the market. Therefore, it remains only to deal with the sell signal, which was formed after the rebound from the extreme level of 1.3424. It should have been worked out, since the signals were strong. However, the price went down after it by only 24 points, which was enough to place a Stop Loss order at breakeven. According to this order, the short position eventually closed, as the price quickly returned to the level of 1.3424. Thus, there was also no profit or loss for the pound/dollar pair on Friday. The figure "1" in the chart marks the time when the consumer sentiment index report was published, after which the pair grew by 40 points. A strong enough reaction for such a weak report. 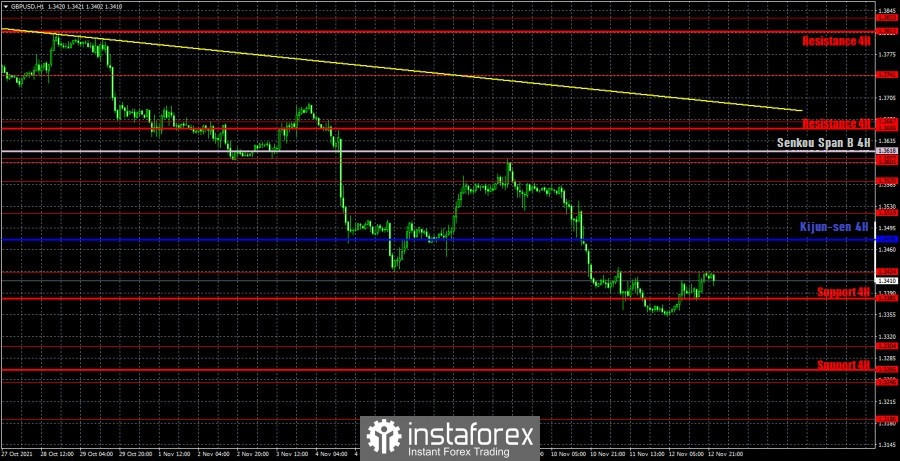 The pound/dollar pair maintains a downward trend on the hourly timeframe, as it continues to be below the trend line. At the moment, the pound/dollar pair is very close to its annual lows and very far from the trend line, so it has the opportunity to correct almost as much as possible and at the same time maintain the downward trend. The price also continues to be below the Senkou Span B and Kijun-sen lines. We highlight the following important levels on November 15: 1.3246, 1.3304, 1.3424, 1.3519, 1.3570. Senkou Span B (1.3618) and Kijun-sen (1.3476) lines can also be signal sources. It is recommended to set the Stop Loss level at breakeven when the price passes 20 points in the right direction. The Ichimoku indicator lines can move during the day, which should be taken into account when looking for trading signals. Nothing interesting is planned for Monday in either the UK or the US. Therefore, during the day, we expect a slight movement, most similar to what was observed on Friday.

Overview of the EUR/USD pair. November 15. Does Jerome Powell have a real chance of keeping his post?

Overview of the GBP/USD pair. November 15. London threatened to use Article 16, but so far has changed his mind

Forecast and trading signals for EUR/USD for November 15. Detailed analysis of the movement of the pair and trade deals. 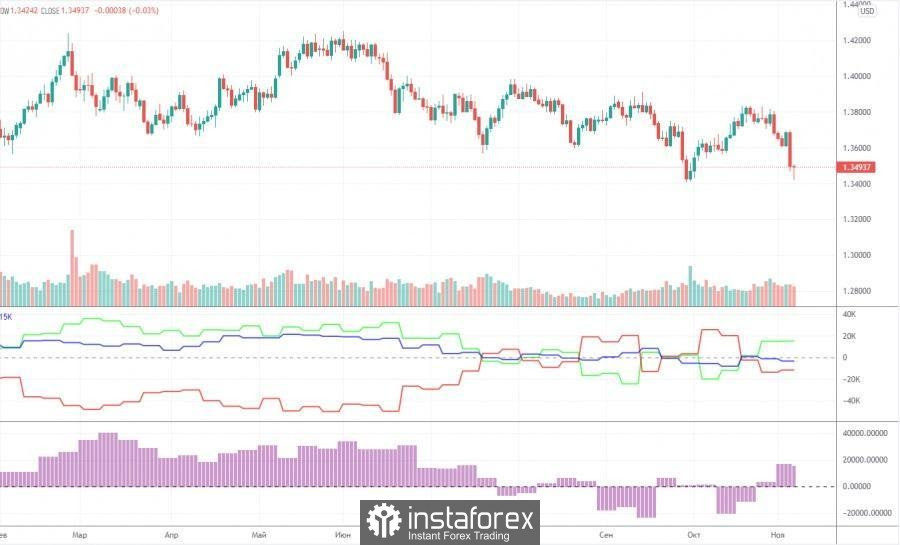 Interesting? Write a comment below.
 Forecast and trading signals for GBP/USD for November 15. Detailed analysis of the movement of the pair and trade deals.
Forward 
Backward 