Forecast and trading signals for GBP/USD for November 19. Detailed analysis of the movement of the pair and trade deals. 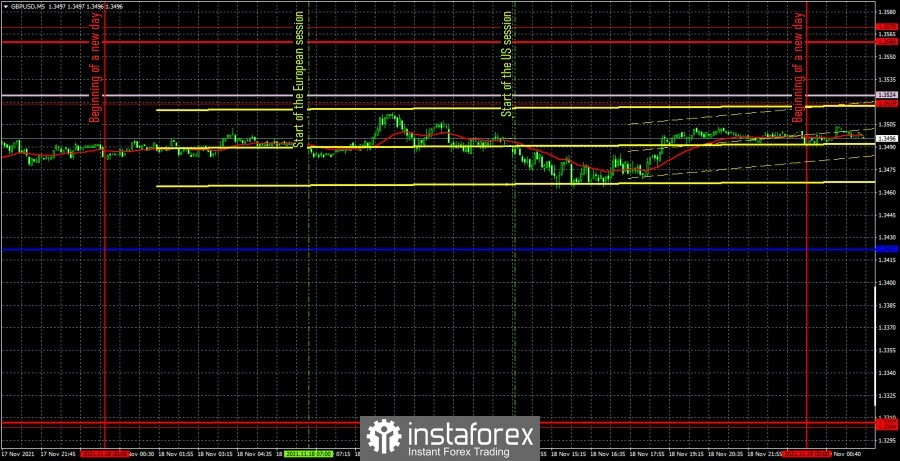 The GBP/USD pair was once again trading very indistinctly on Thursday. The pound tried to continue its growth in the European trading session, and it tried to continue its decline during the US session. As a result, it only passed 50 points in a day, which is very, very little. On the one hand, everything is clear, since there was not a single important event or publication in the UK yesterday either. Thus, nothing influenced the mood of traders on the pound/dollar pair on Thursday. On the other hand, the pound could still move a bit more actively, since 50 points is very little. As in the case with the European currency, not a single trading signal was generated during the past day. Moreover, the price per day could not even work out any line of the Ichimoku indicator or any support level. That is, the pair did not work at all on Thursday! Thus, there was no "macroeconomics", no "foundation", no "technique" yesterday. An unusually boring and uninteresting day. But there are also such. 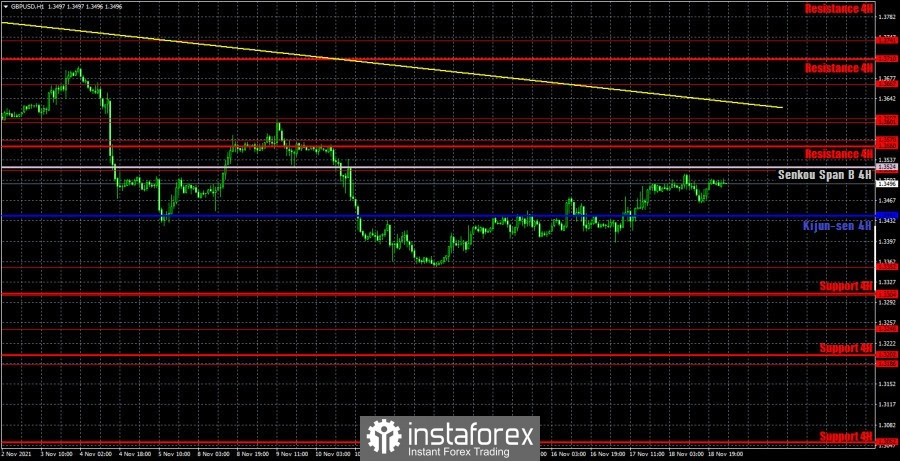 On the hourly timeframe, the pound/dollar pair continues to correct and has already approached the Senkou Span B line, which is the strongest in the Ichimoku indicator. The correction is weak and the downward trend is still far away. If the bulls manage to overcome the upper border of the Ichimoku cloud, then the upward movement can continue with the trend line target. But below the trend line, the downward trend persists, which means that the pound can resume its decline at any time. On November 19, we distinguish the following important levels: 1.3304, 1.3352, 1.3519, 1.3570, 1.3601 - 1.3607. Senkou Span B (1.3524) and Kijun-sen (1.3441) lines can also be signal sources. Signals can be "rebounds" and "breakthroughs" of these levels and lines. It is recommended to set the Stop Loss level at breakeven when the price passes 20 points in the right direction. The Ichimoku indicator lines can move during the day, which should be taken into account when looking for trading signals. October retail sales are due Friday in the UK. According to forecasts, the situation should improve slightly compared to September, but hardly much. Therefore, the pound sterling is unlikely to receive strong market support based on this report.

Overview of the EUR/USD pair. November 19. Jerome Powell or Lael Brainard? That is the question.

Overview of the GBP/USD pair. November 19. Northern Ireland urges to sort out the protocol along its border as soon as possible.

Forecast and trading signals for EUR/USD for November 19. Detailed analysis of the movement of the pair and trade deals. 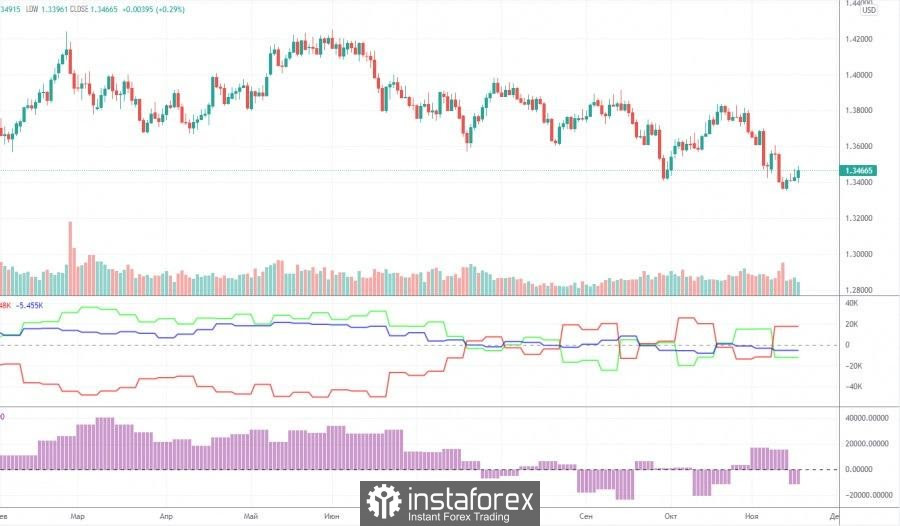 The mood of professional traders became much more bullish during the last reporting week (November 2-8). However, this should not come as a surprise, as the mood of the major players has been constantly changing over the past few months, which is perfectly reflected in the first indicator in the chart above. The green and red lines, which represent the net positions (in other words, the mood) of non-commercial and commercial traders, constantly change direction of movement and constantly change their position relative to the zero level. That is, to put it simply, both of the most important groups of traders are constantly changing their moods. For example, during the last reporting week, professional traders opened as many as 24,000 sell contracts (shorts) and closed 2,500 buy contracts (longs). Thus, their net position decreased by 26.5 thousand. And this despite the fact that in total they have about 130,000 contracts open now. Apart from the recent changes, the bearish mood among professional players has increased by about a quarter. At the same time, the net position is still close to zero, which is more indicative of the neutrality of the sentiment. In general, it is now a thankless task to predict further movements in the pound using COT reports. You can also compare the readings of the first indicator for the euro and the same for the pound. The difference is very strong. If in the case of the euro it is possible to build a trend, then with the pound it is not. In part, the movement of the pound/dollar pair corresponds to the mood of traders in the market, as the pair is constantly changing direction, which is clearly seen in the chart of the 24-hour timeframe above.

Interesting? Write a comment below.
 Forecast and trading signals for GBP/USD for November 19. Detailed analysis of the movement of the pair and trade deals.
Forward 
Backward 