Forecast and trading signals for GBP/USD for November 29. Detailed analysis of the movement of the pair and trade deals. 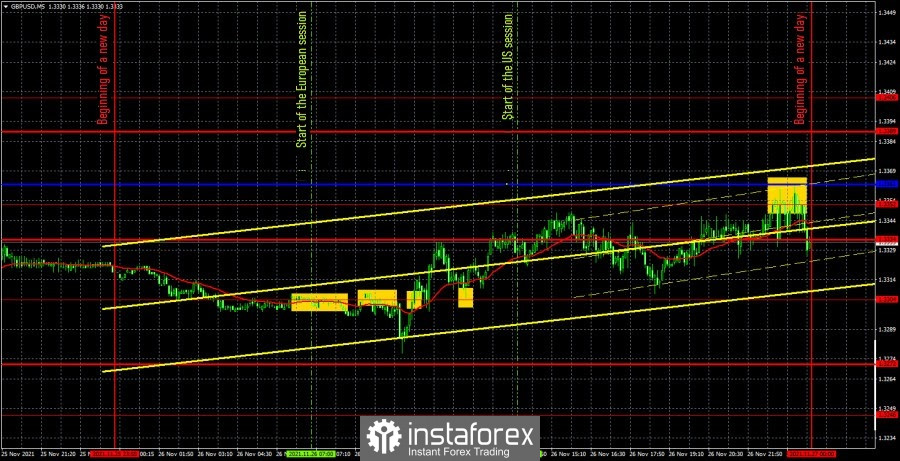 The GBP/USD pair seemed to be trading with a certain trend within the day last Friday, but at the same time, the technical picture looks very ambiguous. First, it should be noted that the pound followed the euro's example and began an upward correction, which can be seen in the higher TFs. However, if the euro is strong enough, the pound is not. Secondly, the movement on Friday falls under both the concept of "flat" and the concept of "trend". During the day, pullbacks and corrections were constantly observed, which made trading very difficult. Thirdly, there were no important events and reports. Fourth, the volatility for the GBP/USD pair turned out to be lower than for the EUR/USD pair. All this led to the fact that trading signals also turned out to be as hard-hitting as possible. The first four signals (hello, flat) formed near the extremum level of 1.3304. By pure coincidence, traders did not receive a loss on them. The first sell signal was immediately duplicated, and the price in total managed to go down 20 points. Therefore, Stop Loss was set at breakeven and a short position was closed on it and closed as a result. The next buy signals were when the price settled above the 1.3304 level and then bounced off it from above. However, the pair could not reach the nearest target level and returned to the level of 1.3304, therefore this deal was closed by Stop Loss at breakeven. And there were no more trading signals during the day. The last trading signal was generated at the close of the trading day and week. 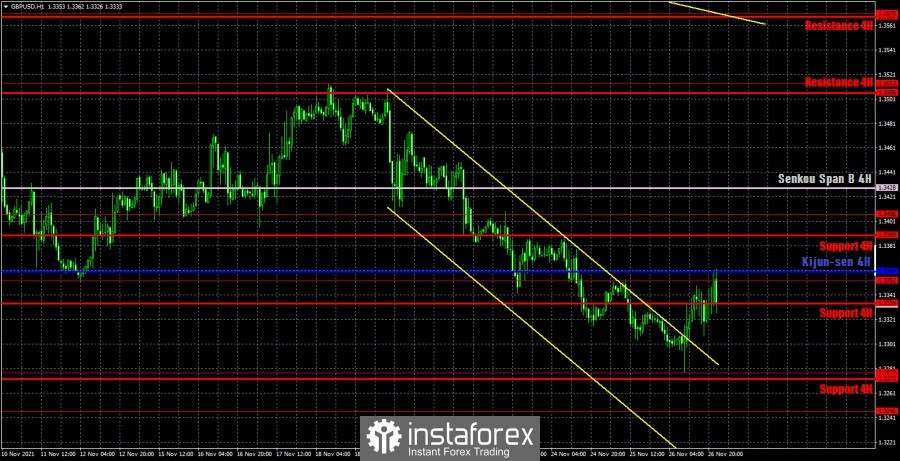 On the hourly timeframe, the pound/dollar pair broke out of the downward channel, which indicates a possible upward correction. However, as we can see, the price has not yet managed to overcome even the critical line, and the movement itself on Friday was rather weak. Thus, either the pound will now creep up, or it will generally resume the downward trend. We highlight the following important levels on November 29: 1.3277, 1.3352, 1.3406, 1.3513. Senkou Span B (1.3428) and Kijun-sen (1.3360) lines can also be signal sources. Signals can be "rebounds" and "breakthrough" of these levels and lines. It is recommended to set the Stop Loss level at breakeven when the price passes 20 points in the right direction. The Ichimoku indicator lines can move during the day, which should be taken into account when looking for trading signals. There are no major events or publications scheduled for Monday in the UK or the United States. Therefore, serious price changes in the pair are unlikely to occur today. Most likely, the day will be calm and only the desire of traders to continue to take profits on short positions can lead to a continuation of the correction. Again, you will have to trade exclusively by "technique".

Forecast and trading signals for EUR/USD for November 29. Detailed analysis of the movement of the pair and trade deals. 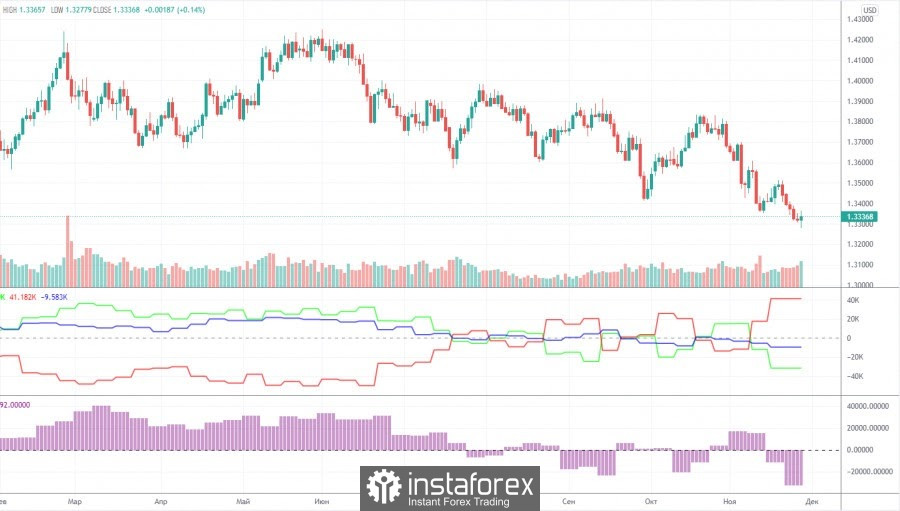 The mood of professional traders became much more bearish during the last reporting week (November 9-15). However, this should not be surprising, since the mood of major players has been constantly changing over the past few months, which is perfectly reflected in the first indicator in the chart above. The green and red lines, which indicate the net positions (in other words, the mood) of non-commercial and commercial traders, constantly change the direction of movement and constantly change their position relative to the zero level. The last reporting week only confirmed us in these conclusions. The green line has dropped significantly again, and the red line has increased significantly, although a couple of weeks ago it was the other way around. Thus, formally, the mood of professional traders has become more bearish, but in reality it changes every couple of weeks, so we can not make a long-term conclusion. The non-commercial group closed 4,000 buy contracts (longs) and opened 17,000 sell contracts (shorts) during the reporting week. Thus, the net position decreased by 21,000 contracts at once, which is a lot for the pound. However, this does not matter much, since the net position of non-commercial traders also constantly jumps up and down, which is eloquently signaled by the second indicator in the chart above. It should also be noted that in the long term, the pound/dollar exchange rate itself also constantly jumps up and down. Thus, it is not possible to make a long-term forecast based on COT reports.

Interesting? Write a comment below.
 Forecast and trading signals for GBP/USD for November 29. Detailed analysis of the movement of the pair and trade deals.
Forward 
Backward 