Forecast and trading signals for GBP/USD for November 9. Detailed analysis of the movement of the pair and trade deals. The 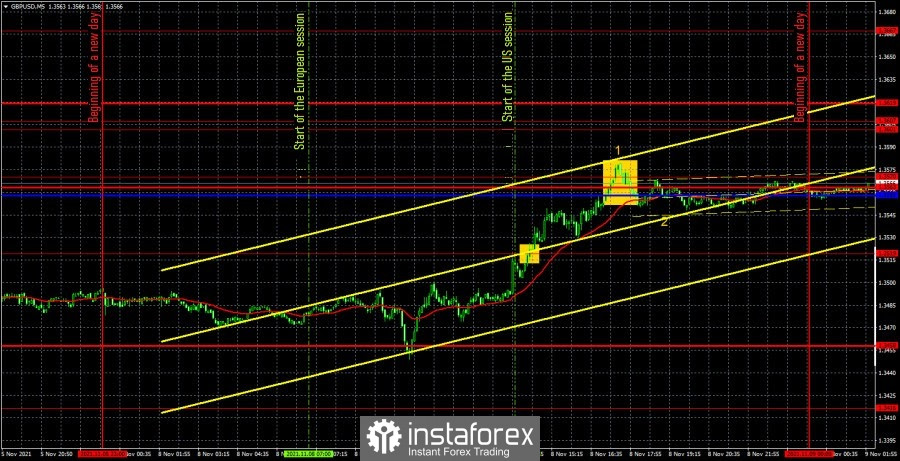 The GBP/USD pair traded much better than the EUR/USD pair on November 8. First, there was a trending move for most of the day. Secondly, the volatility was not the highest, but still very decent - 130 points. Thus, it was a sin not to try to work out such a movement. Moreover, at the weekend we said that the pound would seek to rise due to the fact that last week's fall absolutely does not correspond to the fundamental background, especially from the UK. Thus, we are waiting not just for the British currency to grow by 130 points, but for a much larger upward movement. Unfortunately, there was not a single important line or extreme level in the area where the upward movement started on Monday. Thus, it was not possible to "catch" this movement from its very beginning. Nevertheless, it was possible to open long positions on the buy signal in the form of a breakthrough of the 1.3519 level. Subsequently, the price reached the Kijun-sen line, the resistance level of 1.3563 and the extreme level of 1.3570. All these lines and levels should be considered as a single area. And the price eventually rebounded from it, so it was necessary to take profit on long positions, which amounted to about 20 points. Yes, it's not much, but Monday was, in principle, not the most successful day. It was no longer necessary to work out a sell signal, since it was formed when Federal Reserve Chairman Jerome Powell's speech began (the figure "1" in the chart). And about an hour later, Bank of England Governor Andrew Bailey's speech began (the figure "2" in the chart). Both did not give anything new to the markets, however, these were potentially important events. 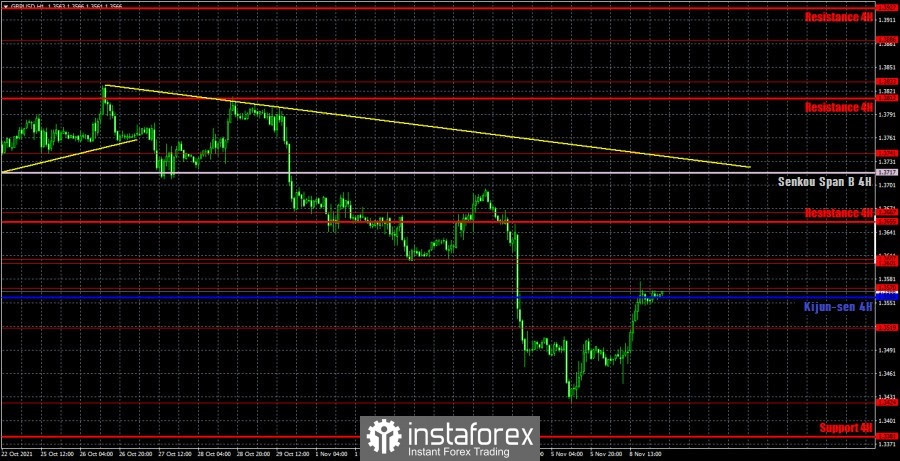 The pound/dollar pair maintains a downward trend on the hourly timeframe, however, we have already drawn traders' attention to the fact that the downward trend line is extremely weak, and has a very weak slope angle. Thus, almost any upward movement in strength can fit into the framework of a downward trend. At the moment, the pound's quotes have managed to rise to the critical line. We believe that the upward movement will continue at least to the trend line. We highlight the following important levels on November 9: 1,3424, 1,3519, 1,3570, 1,3601 – 1,3607, 1,3667. The Senkou Span B (1.3717) and Kijun-sen (1.3558) lines can also be signal sources. It is recommended to set the Stop Loss level to breakeven when the price passes in the right direction by 20 points. The lines of the Ichimoku indicator can move during the day, which should be taken into account when searching for trading signals. Central bankers Bailey and Powell will speak in the UK and the US on Tuesday. However, these events may also not cause any reaction from the markets. Simply because last week there were meetings of both central banks, during the summing up of which both Bailey and Powell spoke. Therefore, it is unlikely that in less than a week, both heads will be able to surprise the markets with something. Moreover, they were not surprised by anything on Monday...

Overview of the EUR/USD pair. November 9. The dollar is trying to continue growing, but this is not beneficial to the Fed

Overview of the GBP/USD pair. November 9. The Bank of England may support the pound, while it may rise by 500 points

Forecast and trading signals for EUR/USD for November 9. Detailed analysis of the movement of the pair and trade deals. 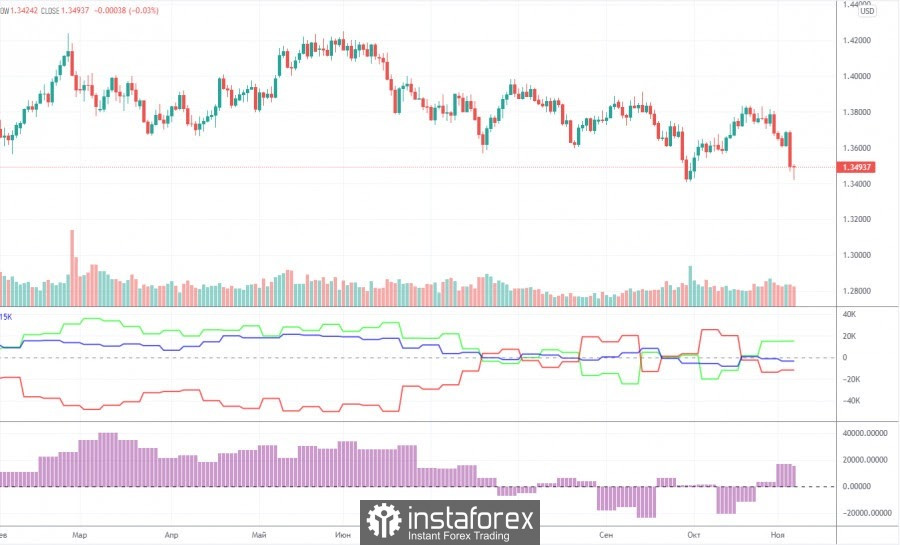 Interesting? Write a comment below.
 Forecast and trading signals for GBP/USD for November 9. Detailed analysis of the movement of the pair and trade deals. The
Forward 
Backward 