Last Friday, the euro grew on rather strong indicators of employment in the United States. In the non-agricultural sector, 531,000 new jobs were created in October against the expected 450,000, the September figure was revised to increase from 194,000 to 312,000. As a result, this resulted in a decrease in unemployment from 4.8% to 4.6%... Average hourly wages increased by 0.4% over the month. The dollar sales were probably influenced by the drop in government bond yields. Thus, the yield on 5-year securities fell from 1.11% to 1.05%.

But this rise in the euro appears to be temporary. Forecasts for economic data for Europe this week show a decline. Today, the published index of investor confidence from Sentix for November is expected to decrease from 16.9 to 15.5, tomorrow the ZEW index of economic sentiment in Germany for the current month is expected to deteriorate from 22.3 to 20.0. In the US, the October PPI may show an increase of 0.6%, and on Wednesday, the US CPI for October is expected to rise from 5.4% y/y to 5.8% y/y. 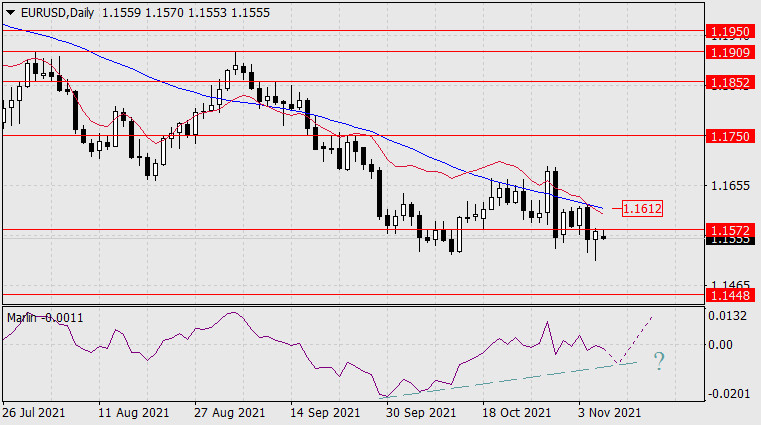 On the daily chart, the price settled below the level of 1.1572, the Marlin Oscillator is declining in the negative zone. The main scenario is the price reversal upward from the target level of 1.1448 or on the way to it with the formation of a reversal convergence with the Oscillator (dashed line). 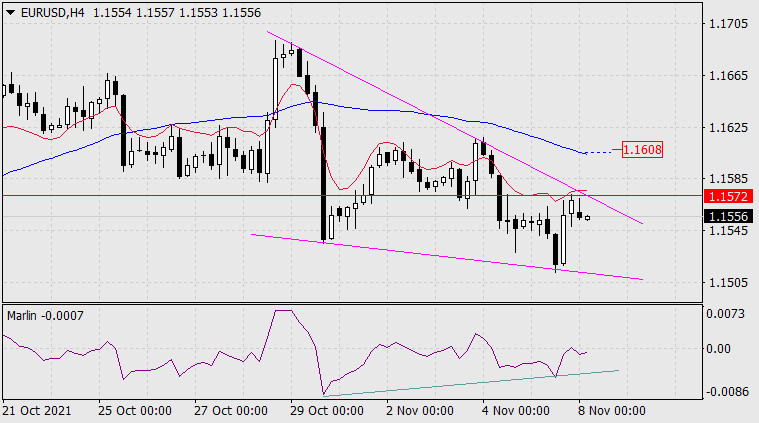 On the four-hour chart, the price with Marlin has already formed a convergence. This may mean that further price declines will be uneven, possibly in the form of a wedge-shaped structure, as indicated on the chart.