There were several excellent signals to enter the market on Friday. Let's take a look at the 5-minute chart and figure out all the entry points. In my morning forecast, I paid attention to the 1.3596 level and advised you to make decisions on entering the market. As a result of the bulls' unsuccessful actions above 1.3596 and a false breakout, a signal to sell the pound was formed, the probability of which I spoke in detail about in the morning. Strong data on the US economy led to a strong sell-off in GBP/USD in the second half of the day and to a renewal of support at 1.3533, which made it possible to take about 60 points of profit from the market. Forming a false breakout at this level led to an excellent entry point into long positions in the opposite direction, making it possible to take about 30 more points from the market. 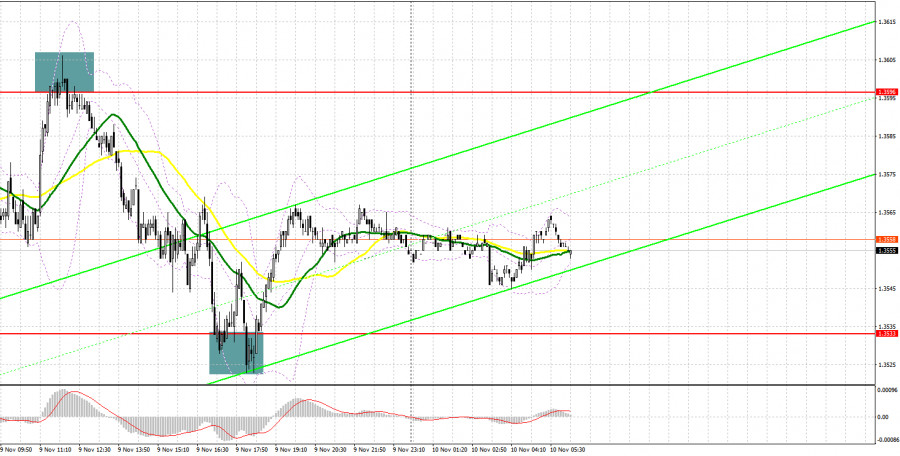 Today we also do not have important fundamental statistics for the UK, so the entire focus of traders will shift to the situation that is developing around the Brexit agreement. Apparently, the Brits are not going to comply with it any longer - this is a strong leading signal that could lead to another wave of a sharp fall in the pound. This news brought the pressure back to the pound yesterday, and now the bulls' main task is to protect the lower border of the horizontal channel at 1.3526, formed at the end of yesterday. Forming a false breakout there will return the chance for an upward correction of the pair, which will lead to a renewal of resistance at 1.3567, which is the middle of the channel. An equally important task is to regain control over this level. A breakthrough and reverse test from top to bottom of this range will provide a signal to buy the pound, which can push the pair to rise to the 1.3605 area and provide the prospect of reaching a high like 1.3649, where I recommend taking profits. The next target will be the high at 1.3694, which will be available only in case we receive weak data on the consumer price index in the US. In case the pair falls in the first half of the day and a deterioration in the situation around Brexit, the best option for buying the pound will be a test of the next support at 1.3478. However, I advise you to open long positions there only after a false breakout. You can observe long positions on GBP/USD immediately for a rebound from a new low like 1.3426, or even lower - from support at 1.3375, counting on a correction of 25-30 points within the day.

Yesterday, bears have already declared themselves, not making it possible to build an upward correction. All that they need now is a breakthrough and a reverse test of 1.3526 from the bottom up, which generates a signal to open new short positions with the goal of falling to lows: 1.3478 and 1.3426, where I recommend taking profits. The next target will be the 1.3375 level, but access to it will open amid very strong inflationary pressure in the US in October this year. The data will be published in the afternoon. If the pair grows during the European session, forming a false breakout in the area of the middle of the horizontal channel at 1.3567 will be the first signal to open short positions. If we see GBP/USD rise above this level, it is best to postpone selling until the larger resistance at 1.3605. I advise you to open short positions immediately on a rebound from 1.3649, or even higher - from a new high in the 1.3694 area, counting on the pair's rebound down by 20-25 points within the day. 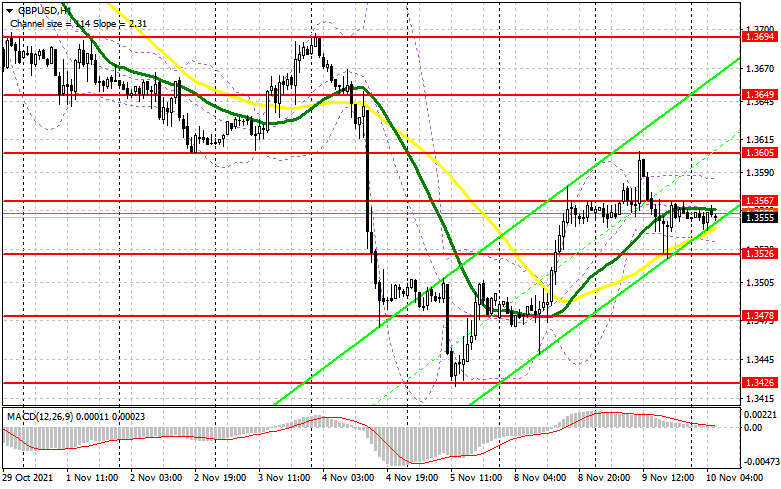 Trading is carried out in the area of 30 and 50 moving averages, which indicates some market uncertainty with the further direction of the pair.