GBP/USD: plan for the European session on November 12. COT reports. Pound continues to fall due to uncertainty over Brexit

Yesterday there were not so many outlets that would allow you to enter the market. One of them was formed during the European session. Let's take a look at the 5-minute chart and figure out this deal. In my morning forecast, I paid attention to the 1.3375 level and advised opening long positions from it. It is clearly seen how, after receiving a weaker than expected report on the UK GDP growth rate for the third quarter of this year, the bears returned to the market, which led to an instant fall of the pound to the support area of 1.3375. However, as bears did not try to settle below this range, nothing was possible. Forming a false breakout there led to a signal to buy the pound, after which the pair rose from the entry point by more than 40 points. The pound was trading within the horizontal channel in the afternoon. 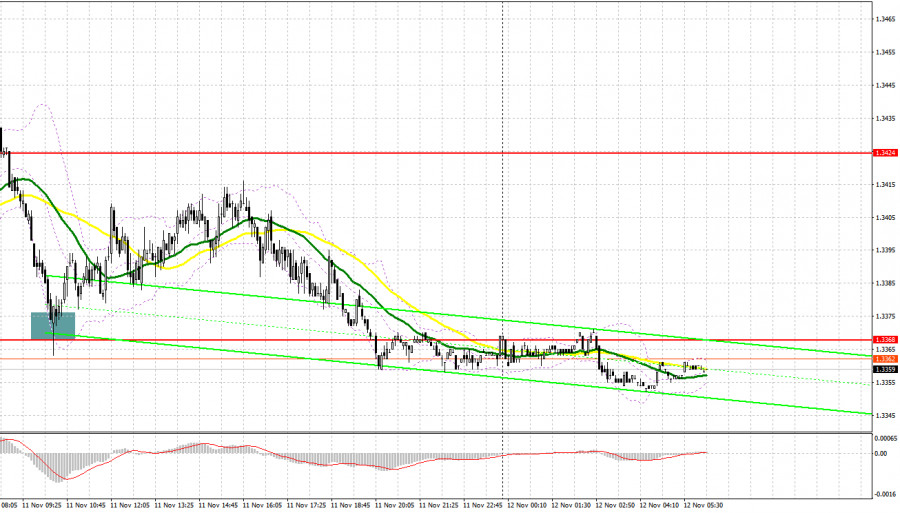 Today, apart from the speech of Jonathan Haskell, a member of the Monetary Policy Committee of the Bank of England, there are no important fundamental statistics, so it is possible that bears may take a break and lock in profits at the end of this week after a bearish rally, which will lead to an increase in the pound. However, the fact that traders continue to monitor the situation developing around the Brexit agreement does not add confidence to the bulls. The pressure on the pound will continue until the EU and the UK find a common language regarding compliance with the protocol on Northern Ireland. The main task of the bulls for the first half of the day is to protect the 1.3308 level. Forming a false breakout there, along with the divergence that is now observed on the MACD indicator, form a signal to buy the pound against the trend. This will return the chance for an upward correction of the pair to the area of 1.3368, which the bulls missed in today's Asian session. An equally important task is to regain control of this level. A breakthrough and a reverse test from top to bottom of 1.3368 will provide another signal to buy the pound, which will lead to the movement of GBP/USD upward to the area of 1.3413 with the prospect of reaching a high like 1.3469, where I recommend taking profits. There are moving averages that limit the upward potential. In case the pair falls in the first half of the day and the deterioration of the situation around Brexit, the best option for buying the pound will be a test of the next support of 1.3308. However, I advise you to open long positions there only after a false breakout. You can watch GBP/USD long positions immediately for a rebound from the new low of 1.3254, or even lower - from the support of 1.3193, counting on a correction of 25-30 points within the day.

Bears control the market, constantly proving this by updating weekly and monthly lows. All that bears need to continue the downward trend now is to protect the resistance of 1.3368, which they managed to beat off the bulls during the Asian session. Forming a false breakout there, and above this level are moving averages playing on the bears' side, will lead to the formation of an entry point into short positions, followed by a decline in GBP/USD to the area of the low of 1.3308. Breaking through this range will be an equally important task for the bears. The 1.3308 test from the bottom up forms another signal to open new short positions in order to fall to the lows: 1.3254 and 1.3193, where I recommend taking profits. If the pair grows during the European session and there are no bears at the level of 1.3368, it is best to postpone short positions to a larger resistance of 1.3413. I advise you to open short positions immediately for a rebound from 1.3469, or even higher - from a new high in the area of 1.3522, counting on the pair's rebound down by 20-25 points within the day. 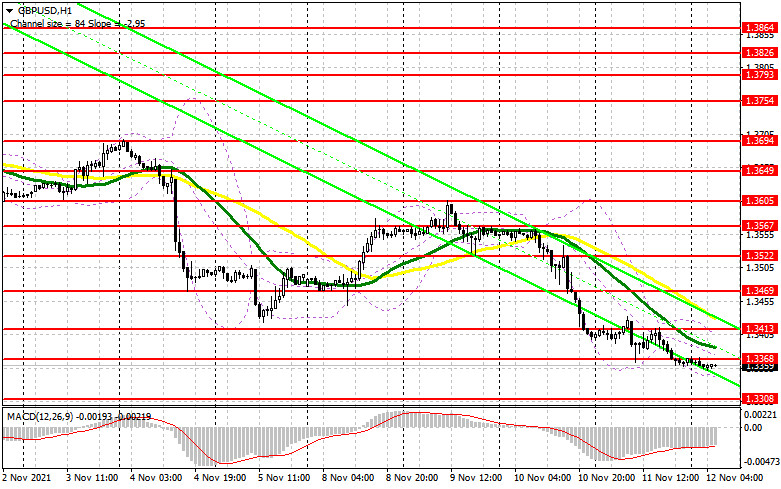 Trading is conducted below the 30 and 50 moving averages, which indicates the continuation of the bear market.

Interesting? Write a comment below.
 GBP/USD: plan for the European session on November 12. COT reports. Pound continues to fall due to uncertainty over Brexit
Forward 
Backward 