Yesterday afternoon was much better than the first. Let's take a look at the 5 minute chart and see what happened. Although the first half of the day led to the formation of a number of signals to enter the market, all of them did not bring the expected profit. Investor caution following the release of UK labor market data prevented the bulls from building a larger upward correction. Immediately after the publication of the reports, the pound rose, but the bears made a false breakout at 1.3458, creating a signal to open short positions there. After some time, the bulls climbed above 1.3458 again, testing this level from top to bottom, which led to the closure of short positions and the opening of long positions, counting on the continuation of the upward trend after the good news - but here again, the pair fell below 1.3458. In the second half of the day, two signals to buy the pound from the level of 1.3431 were formed at once. Unsuccessful attempts to break below this range resulted in forming a false breakout. Both signals showed an increase of 30+ points. 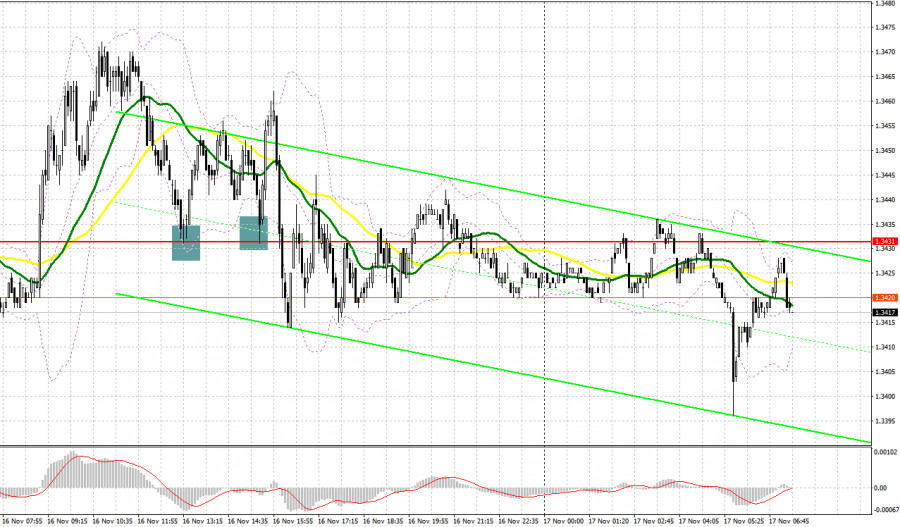 Today is an important day for the GBP/USD pair, as inflation data in the UK will be released in the first half of the day. Yesterday's unemployment rate managed to please traders, which protected GBP/USD from the fate that befell the European currency. If today's inflation report in the UK shows growth above economists' forecasts, then it will be a strong bullish signal for the pound. The bulls' main task in the first half of the day is to protect the level of 1.3398. Forming a false breakout there generates a signal to buy the pound against the trend. This will return the chance for an upward correction of the pair to the 1.3441 area, where the moving averages, which play on the side of bears, pass. An equally important task is to regain control over this level. A breakthrough and reverse test from top to bottom at 1.3441 will give another buy signal, which will lead to GBP/USD moving up to the 1.3494 area with the prospect of reaching a high like 1.3534, where I recommend taking profits. In case the pair falls in the first half of the day and we receive weak data on the consumer price index, the best option for buying the pound will be a test of the next support at 1.3354. However, I advise you to open long positions there only after a false breakout. You can watch long positions of GBP/USD immediately for a rebound from a new low like 1.3308, or even lower - from support at 1.3254, counting on a correction of 25-30 points within the day.

The bears are still a bit confused and are looking for any reason to sell the pound - but there is none. If inflation jumps much higher than forecasted, it will greatly hurt the bulls, as all the recent statements by Bank of England Governor Andrew Bailey will lose their meaning. To reverse the downward trend, it is necessary to protect resistance at 1.3441, where the moving averages pass. Forming a false breakout there will result in creating an entry point into short positions, followed by a decline in GBP/USD to the 1.3398 area. Breaking through this range will be equally important for the bears. The 1.3398 test from the bottom up creates another signal to open new short positions with the goal of falling to the lows: 1.3354 and 1.3308, where I recommend taking profits. In case the pair grows during the European session and there are no bears at 1.3441, it is best to postpone selling until the larger resistance at 1.3494. I advise you to open short positions immediately on a rebound from 1.3534, or even higher - from a new high in the 1.3567 area, counting on the pair's rebound down by 20-25 points within the day. 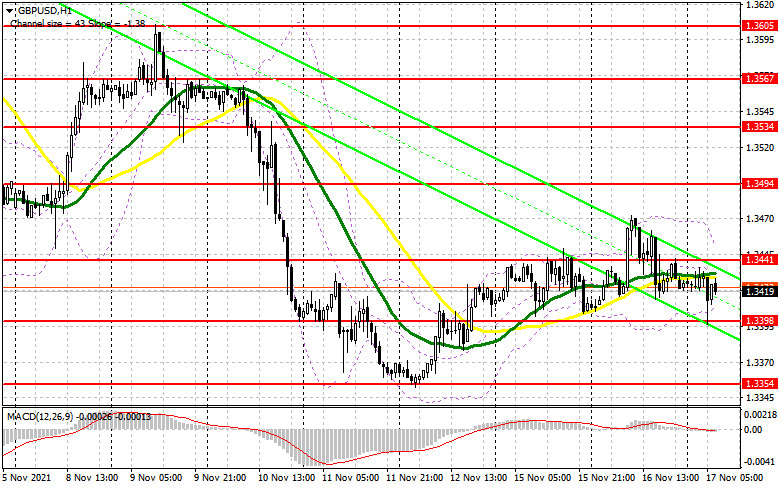 The Commitment of Traders (COT) report as of November 9 logged an increase in short positions and a decrease in long ones, which led to a negative delta. Disappointing Q3 GDP results in the UK and a possible plunge in retail sales in Q4 amid a spike in inflation pushed the sterling down and exerted pressure on it. Another important factor for a bearish pound is the escalation of tension over the Northern Ireland protocol the British authorities plan to terminate in the near future. The European Union is preparing to introduce certain retaliatory measures. At the same time, inflation in the United States keeps rising, increasing the likelihood of earlier interest rate hikes, which provides support to the greenback. Nevertheless, I recommend sticking to the strategy of buying the pair after every large fall that is likely to occur amid uncertainty surrounding the central bank's monetary policy. According to the COT report, long non-commercial positions declined to 54,004 from 57,255 and short non-commercial positions increased to 66,097 from 42,208. The delta came at -12,093 versus 15,047 a week earlier. The weekly closing price dropped to 1.3563 from 1.3654 due to the Bank of England's stance on monetary policy.

Trading is carried out below 30 and 50 moving averages, which preserves the bears' chance for continuing the trend.

A breakthrough of the upper border in the 1.3445 area will lead to a new wave of growth in the pound. A break of the lower border of the indicator around 1.3400 will increase the pressure on the pound.