GBP/USD: plan for the European session on November 25. COT reports. The way for the pound is open to the area of the 32nd

Yesterday there were a lot of profitable signals to enter the market. I suggest looking at the 5-minute chart and sorting out all the trades. In my morning forecast, I paid attention to the resistance at 1.3386 and gave several scenarios on how to act. An unsuccessful attempt to settle above and a false breakout in the 1.3386 area led to the formation of a signal to sell the pound, after which it fell by 40 points. In the afternoon, at the first test of support at 1.3344, the bulls managed to protect this area, which resulted in forming a false breakout and a signal to buy the pound. However, there was no major upward movement against the trend. After rising 15 points, the pressure on the pound returned and a breakdown of 1.3344 took place. The test of this level from the bottom up provided an excellent entry point into short positions, after which the pair fell by another 30 points. 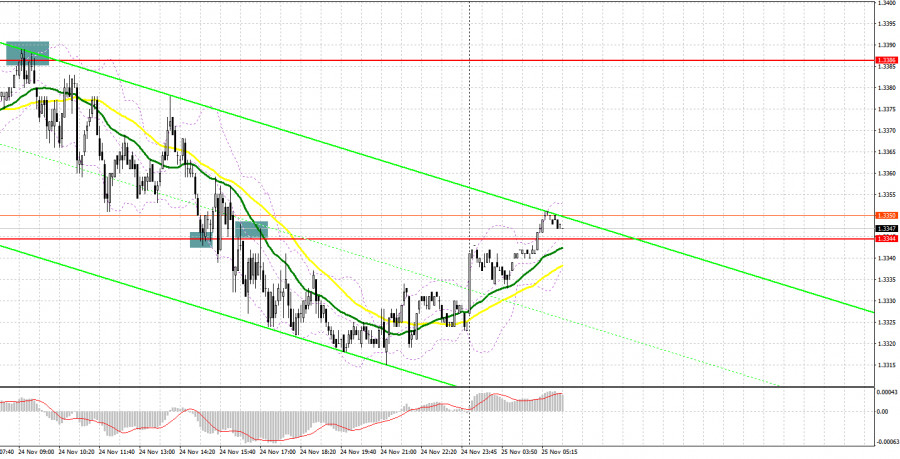 No fundamental statistics for the UK today and most likely the bulls will try to take advantage of this by building an upward correction for the pair. Much will depend on the bulls' behavior at 1.3357, where the moving averages, playing on the bears' side, pass. Only a breakthrough of this area and a test from top to bottom will lead to the formation of a good entry point into long positions with the prospect of the pound's recovery to the high of 1.3396. The statements of Bank of England Governor Andrew Bailey are unlikely to have a positive effect on the pair, however, if there are hints of a more active reduction in the bond buying program, the bulls can quickly deal with 1.3396, taking the way to a high like 1.3446, where I recommend taking profit. In case the pound falls during the European session, bulls will have to try to protect the support at 1.3316, formed at the end of yesterday. Only this option will stop the bearish trend. The formation of a false breakout there against the background of low trading volume in connection with Thanksgiving in the United States forms an entry point into long positions in the pair. In case EUR/USD falls and the bulls are not active at 1.3316, the pressure on the pound could seriously increase. In this case, I advise you to open new long positions only after a false breakout in the 1.3264 area. You can watch buying GBP/USD immediately for a rebound from the 1.3227 low, or even lower - from the support of 1.3189, counting on a correction of 25-30 points within the day.

So far, the bears are doing an excellent job with the task set before them, updating their lows every day - this will preserve the downward trend for the pair, not allowing the bulls to offer anything in return. The best option to sell GBP/USD today would be to form a false breakout at the level of 1.3357, where the moving averages, playing on the side of bears, pass. This will lead to the formation of a new entry point into short positions with a subsequent decline to the area of the week's low at 1.3316. A lot depends on this level today, as there the bulls will try to make every effort to protect it. A breakthrough of this range, along with a reverse test from the bottom up, all this forms another signal to open new short positions with the goal of falling to the lows: 1.3264 and 1.3227, where I recommend taking profits. The next target will be the 1.3189 area. However, do not forget that today is Thanksgiving in the United States, and volatility can be quite low due to the closure of a number of US exchanges. In case the pair grows during the European session and the bears' activity is weak at 1.3357, and it is quite possible that the bulls will take advantage of the lack of fundamental statistics and low trading volume, it is best to postpone selling to a larger resistance at 1.3396. I advise you to open short positions immediately on a rebound from 1.3446, or even higher - from a new high in the 1.3494 area, counting on the pair's rebound down by 20-25 points within the day. 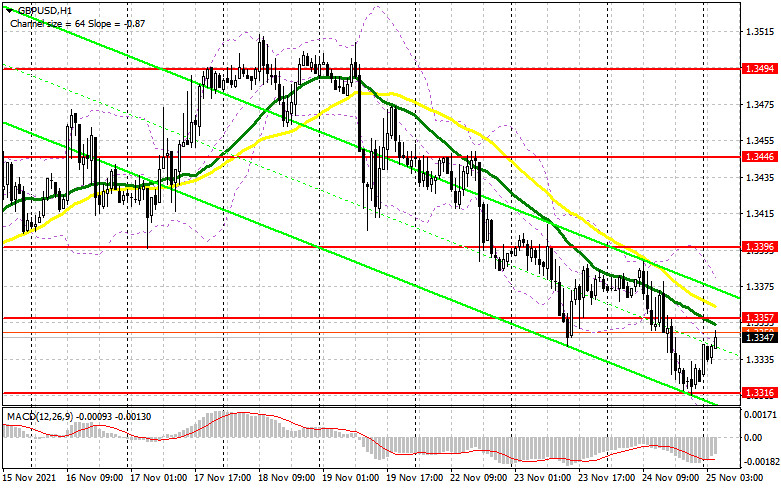 The Commitment of Traders (COT) reports for November 16 revealed that short positions sharply increased and long positions decreased, which led to an increase in the negative delta. Good data on the recovery of the UK labor market, increased inflationary pressures and higher retail sales - all this saved the British pound last week and gave the bulls a chance for the pair to continue to rise. However, the aggravation of the situation with the coronavirus in the European part of the continent and the statements of representatives of the Bank of England that no one would rush to change the course of monetary policy in the current conditions - all this very quickly returned the pressure on the pair by the end of the week. An important point is the unresolved issue around the protocol on Northern Ireland, which the UK authorities are planning to suspend in the near future. To this, the European Union is preparing to introduce certain countermeasures - which does not add confidence to the bulls of the British pound. At the same time, in the United States of America, we are witnessing a rise in inflation and increased talk about the need for an earlier increase in interest rates next year, which is providing significant support to the US dollar. However, I recommend sticking to the strategy of buying the pair in case of very large declines, which will occur against the background of uncertainty in the central bank's policy. The COT report indicated that long non-commercial positions declined from 54,004 to 50,443, while short non-commercials rose from 66,097 to 82,042. This led to an increase in the negative non-commercial net position: delta was -31 599 against -12,093 against a week earlier. The weekly closing price collapsed as a result of the Bank of England's policy from 1.3563 to 1.3410.

Trading is carried out below 30 and 50 moving averages, which indicates a downward trend for the pair.

A breakthrough of the upper border in the 1.3360 area will lead to a new wave of growth in the pound. A break of the lower border of the indicator in the area of 1.3316 will increase the pressure on the pound.

Interesting? Write a comment below.
 GBP/USD: plan for the European session on November 25. COT reports. The way for the pound is open to the area of the 32nd
Forward 
Backward 