GBP/USD: plan for US session on November 19 (analysis of morning trade). British pound falls amid risk of another lockdown

To open long positions on GBP/USD you need:

The British pound fell dramatically against the US dollar on Friday morning trading. However, it failed to get a favourable entry point for short positions. Let's observe the 5-minute chart and analyze it. The eurozone news that Austria announced a lockdown and Germany is about to do the same is not optimistic for pound buyers. The break of 1.3466 occurred without the reversed test of that level from the bottom to the top, so I missed the entry point. Besides, the formation of a false break at 1.3419 resulted in a good entry point to long positions. At the time of writing the article the growth totaled more than 30 points. The technical picture has changed a little. 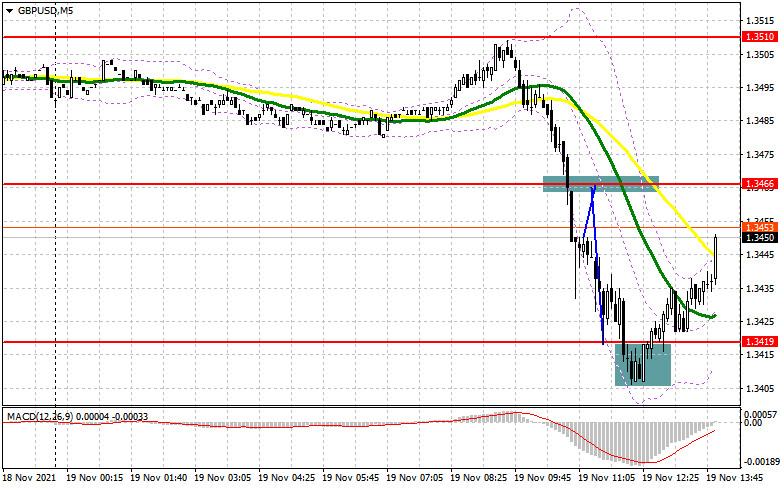 In the second half of the day only the representatives of the Federal Reserve System are speaking and there are no significant fundamental statistics. Therefore, traders will continue to follow the results of the Irish protocol negotiations. Bad news will exert more pressure on the pound. However, buyers have a chance to overcome it. A break and a consolidation above the resistance at 1.3464, above which the moving averages pass, would be a powerful impetus for the pound to advance by the end of the day. A test of that level from the top down will provide a profitable entry point to long positions, with the target to return to 1.3506, where I recommend taking profits. Exit above this range will occur only if the parties manage to reach agreement. The test of 1.3506 will form an additional buying signal with the prospect of renewal high of 1.3560, where I recommend taking profit. With a downside scenario in the second half of the day the best entry point to long positions will be the formation of a false break around 1.3411. In case of lack of bulls' activity at this level, pressure on the pound may seriously increase. Besides, the statements of the Fed representatives may also contribute to it. In this case I advise traders to open new long positions only after a false break around 1.3365. It is possible to consider buying GBP/USD on the rebound from the new low at 1.3308, or even lower, from the support 1.3254, counting on the correction of 25-30 pips within a day.

To open short positions on GBP/USD you need:

Bears got a great chance and they took advantage of it. Their target now is to protect resistance at 1.3464. Only the formation of a false break there will lead to the formation of a good entry point to short positions with the subsequent decline of GBP/USD to the area of the intermediate support 1.3411. Its break will quickly push the pair to the weekly low 1.3365, where I recommend taking profit. A break of this range will be rather significant for sellers. However, it will occur in case the sides declare to end the meetings. A test of 1.3365 from the bottom to the top will be an additional signal to open new short positions with the target to decline to the lows of 1.3308 and 1.3254, where I recommend taking profit. In case the pair is rising during the US trading and there are no sellers at 1.3464, it is better to postpone selling until larger resistance at 1.3506. I advise traders to open short positions on the rebound from 1.3560 or even higher, from the new high at 1.3605, counting on a 20-25 pips rebound within a day. 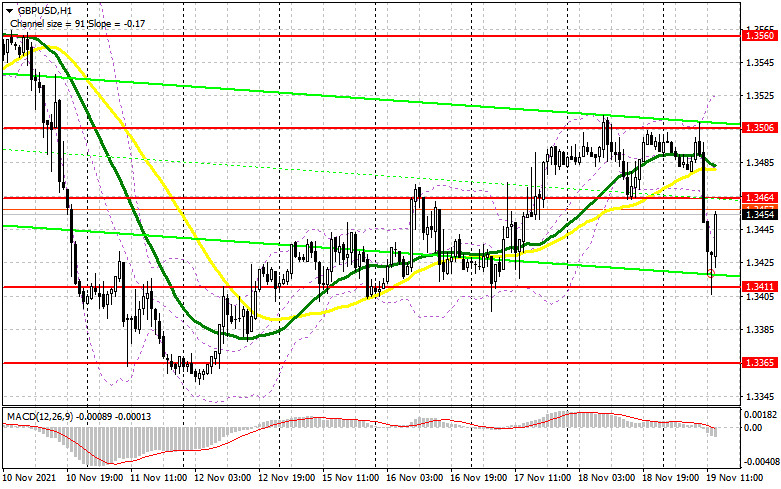 The COT reports (Commitment of Traders) for November 9 recorded an increase in short positions and a sharp decline in long positions, which led to a negative delta. Weak data on GDP growth in the UK in the third quarter this year, as well as the risk of a more serious slowdown in retail sales in the fourth quarter due to high inflation caused the pund's decline and the continued pressure on it. A significant point was the deterioration in the situation concerning the protocol on Northern Ireland, which the British authorities plan to suspend in the near future. In response to it, the European Union is preparing to introduce certain countermeasures. Moreover, this aspect is not favourable for buyers of the British pound. At the same time, rising inflation and further talks about the need to raise interest rates earlier next year is observed in the United States. This fact provides considerable support to the US dollar. However, I recommend buying the pair at rapid declines, which will occur amid the uncertainty in the Central Bank's policy. The COT report indicates that long non-commercial positions decreased from 57,255 to 54,004, while short non-commercial positions strengthened from 42,208 to 66,097. This resulted in a negative change in the nonprofit net position. The delta totaled -12,093 versus 15,047 a week earlier. The weekly closing price of GBP/USD plunged from 1.3654 to 1.3563 due to the Bank of England's policy. 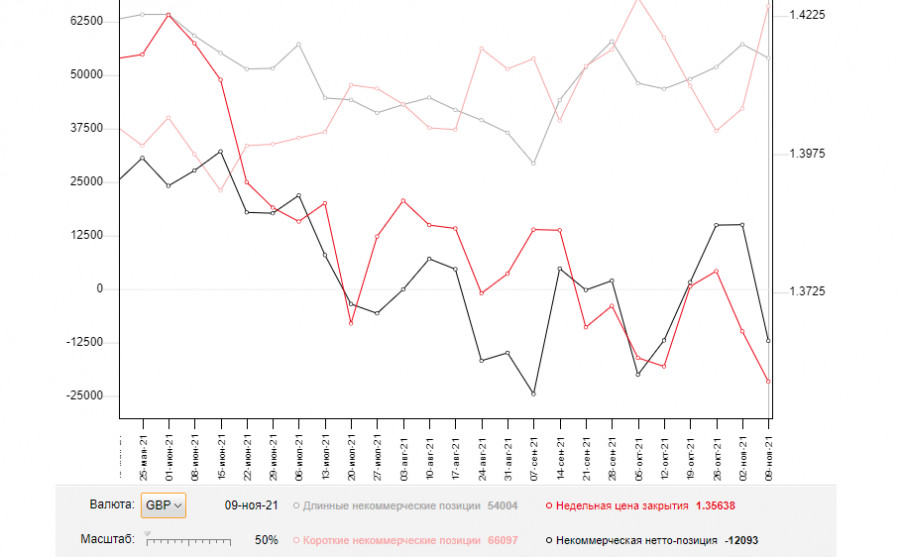 Trading is conducted below the 30 and 50 day moving averages, indicating that the market bears are back in control.

Note. The period and prices of moving averages are considered by the author on hourly chart H1 and differ from the common definition of classic daily moving averages on daily chart D1.

Interesting? Write a comment below.
 GBP/USD: plan for US session on November 19 (analysis of morning trade). British pound falls amid risk of another lockdown
Forward 
Backward 