GBP/USD. Preview of the new week. American inflation is the key event of the week 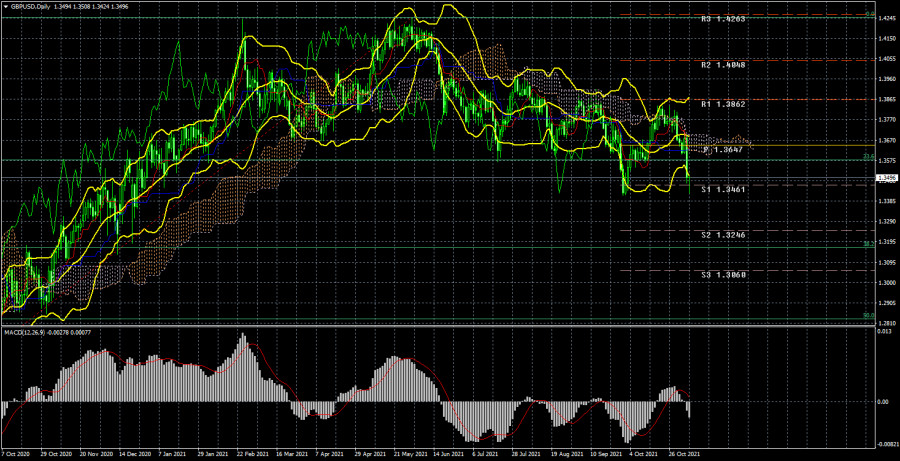 The pound/dollar pair also fell to its annual lows last week. However, in the case of the pound, the whole downward movement, which has been going on for about 8 months, absolutely does not look like a trend. Therefore, the whole downward movement can also be a normal correction against a global upward trend. And if so, then the upward movement can resume at any moment. The fundamental background for this pair looks even more confusing than for the euro/dollar pair. If everything is more or less calm in the European Union now, except for a new outbreak of the "coronavirus", then it simply cannot be quiet and calm in the UK. News about Brexit, about the "fuel crisis", about the "logistics crisis", about constant negotiations and skirmishes with the EU countries, about the "Northern Ireland protocol" are pouring in an incessant stream from the UK And recently, news has also begun to arrive that Wales is also going to seriously consider leaving the Kingdom in the next couple of years. Recall that Scotland is going to hold its independence referendum next year. Thus, the fundamental background from the UK leaves much to be desired and it can even be assumed that the fall of the pound in the last 8 months is due to it. However, this conclusion is very ambiguous, since in general the fundamental background is very extensive, and a lot of important news also comes from the United States. Therefore, it is not possible to draw an unambiguous conclusion about which factor is causing the pair to rise or fall. Therefore, we need to pay more attention to the technical picture and leave the "foundation" only for building hypotheses, which can then be confirmed or not confirmed by "technology".

Last week, by the way, a very important event happened for the British pound. Unexpectedly, it turned out that the Bank of England could raise the key rate as early as November, without waiting for the complete curtailment of the quantitative stimulus program. And against the background of this news, the British currency collapsed like a stone, although it would be much more logical to see its strengthening since even in the States there is no question of raising the rate now. And if two of the 9 members already vote for its increase, it means that the rate may be raised at the next meeting. And a rate hike is the strongest bullish factor for the currency. Consequently, it turns out a situation in which we have repeatedly wondered why the pound is getting cheaper against the dollar so reluctantly. But when a factor appeared that could provide significant support to the pound, everything turned out exactly the opposite.

However, we consider it a viable option, in which the wagering of this decision will begin in the new week. In other words, the pound will start to rise. Especially if there is a rebound from the support level of 1.3461. In this case, a "double bottom" formation will be formed. And even if an upward trend does not start after that, then a round of upward movement with a potential of about 500 points should be formed. If you look at the illustration above carefully, it becomes clear that the pair is constantly being adjusted. Therefore, we are not waiting for the pound to fall further and the dollar to rise.

In the new week in the UK, there will be important macroeconomic information only on Thursday. The GDP report for September and the industrial production report for the same period will be published. However, in the current conditions, we believe that these reports will have virtually no impact on market behavior unless their actual values are very different from the forecasted ones, which may shock the market. Thus, the most important event of the week will certainly be the inflation report for October in the United States. And there may be surprises here, to which the market can react in any way. According to experts, inflation may rise to 5.7-5.8% y/y. And this is the maximum value of inflation over the past 30 years. Earlier, the US dollar strengthened on the growth of inflation, as it brought the moment of curtailing the QE program closer, but no one knows how it will be this time. Recall that after the "hawkish" Fed meeting, the dollar initially fell. And after the "hawkish" BA meeting, the pound was already falling. Thus, there may be little logic in the pair's movement after the publication of the consumer price index. Nevertheless, there should be a reaction, and it can greatly affect the weekly trend. We believe that further inflation growth is already dangerous for the US economy, so the dollar is unlikely to experience bouts of optimism. From our point of view, most factors continue to speak in favor of a new fall in the US currency. 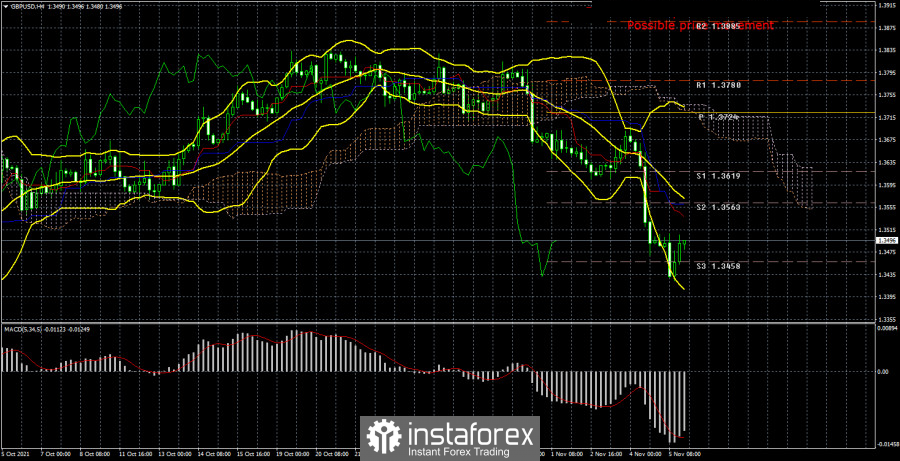 The pound/dollar pair was in a downward movement on the 4-hour timeframe last week. Therefore, it is advisable to stay in short positions for the time being. However, at the same time, the further fall of the pair is completely not obvious. Therefore, if the price is fixed above the critical Kijun-sen line, then you should exit sell orders and consider buy orders in small lots. We believe that the fall of the pound last week was not justified, so this week an equally strong upward movement may begin with the goal of the Senkou Span B line, which now lies at the level of 1.3725.

Interesting? Write a comment below.
 GBP/USD. Preview of the new week. American inflation is the key event of the week
Forward 
Backward 