GBP/USD. Preview of the new week. It will be difficult for the US dollar to continue strengthening against the pound 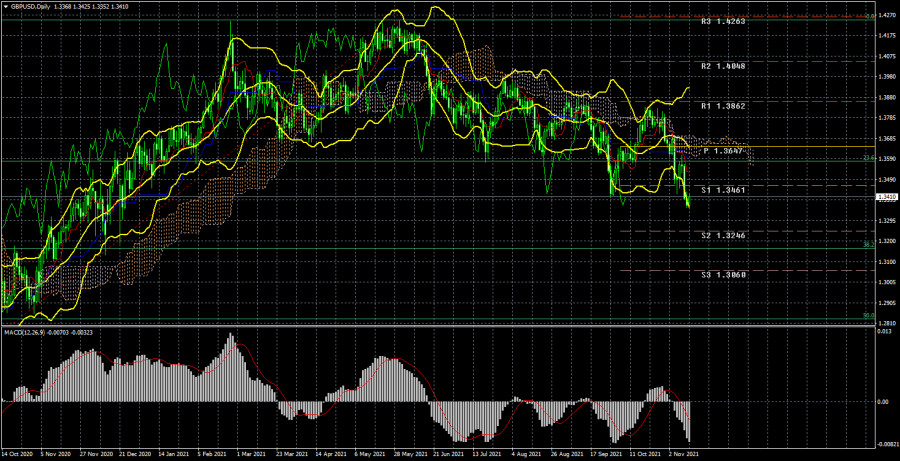 The pound/dollar pair continued its downward movement last week. However, as we said earlier, this movement still looks like a correction. In principle, this is very noticeable if we compare the upward trend of last year and the downward movement this year. In the first case, there was an almost recoilless upward movement, which was only occasionally replaced by very shallow corrections. In the second case, we observe constant, deep corrections against the main movement, which is why we conclude that all this movement itself is a correction. Thus, even based on purely visual perception, we believe that at this time the GBP/USD pair continues to adjust. If this is the case, then the correction will end sooner or later and the upward trend will resume. We expected that a new round of movement to the north would begin last week. However, the report on American inflation spoiled everything, so the downward movement was resumed, which, however, did not change anything in the overall picture of the state of things. Now we expect a new turn to the north in the new week. But, of course, "macroeconomics" and "foundation" can affect the mood of the markets this time.

What should be highlighted now in the UK? Next week, several rather important reports will be published at once. The most important is British inflation, which, according to forecasts, may rise to 3.7-3.9% y/y. Given that the growth of inflation is a widespread problem at this time, there is no doubt that these figures can be achieved. Recall that after a strong increase in US inflation, the US dollar showed growth. I wonder if purchases of the British currency will begin if inflation in Britain rises above 3.7%? In addition to inflation, data on unemployment, average earnings will be published on Tuesday, and on Friday - on retail sales. However, these reports are not the most significant, and a reaction to them can only follow if the actual value is very different from the forecast. It should also be noted that the markets can now take into account the situation between London and Brussels regarding the "Northern Ireland Protocol". Recall that the parties are still approaching the complete termination of all agreements on Brexit, and not resolving the issue of the regime on the border between Northern Ireland and Ireland. There is even talk that a trade war may break out between the Bloc and the Kingdom. In general, the situation does not become more favorable after Brexit. On the contrary, for Britain, everything is getting more complicated every month and year. Experts are already tired of counting the country's losses from leaving the European Union. But a lot of time is not required to calculate the pros and benefits of Brexit. The logistics crisis is generally a separate story. It's hard to believe that in such a developed country like Britain, there is a shortage of movers, drivers, and waiters, and the government can't do anything about it. At the same time, Boris Johnson became involved in a corruption scandal. In general, the situation is not the most favorable for the pound.

But there will be a few important news and events in the USA next week. Perhaps we can highlight only the retail sales report for October, which will be released on Tuesday, and that's it. However, one or two performances can still take place, as they are often included in the calendar for a day or two. Therefore, perhaps there are no relevant records now, but they will appear in the near future. However, the fundamental background in the States will still be quite weak. Therefore, we do not see a lot of reasons for the further growth of the US currency. Of course, everything will depend on the mood of traders. If they continue buying the dollar or selling the pound, the pair's exchange rate will continue to fall. Unfortunately, at the moment, the new COT report, which would include data on the days when the Fed and BA meetings were held, has not yet been released. Most likely, it will be published on Monday, so only tomorrow it will be possible to understand how the major players are configured at this time.

In general, we do not see any events next week that could allow the US currency to continue to grow. However, there are no technical buy signals yet. Therefore, you need to be ready for an upward turn, but it's premature to buy a pair now. On the 24-hour TF, the price is at the lower Bollinger band, below all the lines of the Ichimoku indicator. Consequently, the trend remains downward. There may be buy signals or a trend change on the 4-hour timeframe. Recall that below the 4-hour TF, the use of the Ichimoku indicator is no longer advisable. 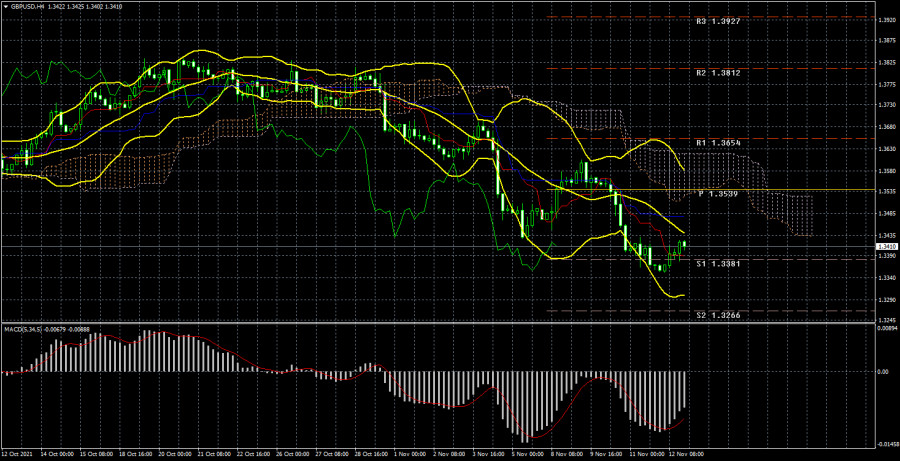 The pound/dollar pair was in a downward movement on the 4-hour timeframe last week. Therefore, it is advisable to consider short positions for the time being. However, at the same time, the further fall of the pair is completely not obvious. Therefore, if the price is fixed above the critical Kijun-sen line, then you should exit sell orders and consider buy orders in small lots. We believe that the fall of the pound last week was justified, but in general, the fundamental background is not unequivocally in favor of the US currency. Therefore, we believe that a new upward movement of 400-500 points may begin in the new week. But to confirm this assumption, specific technical signals are needed, which are not yet available. If the price remains below the critical line, then it will be possible to sell the pair with targets of 1.3266 and 1.3108.

Interesting? Write a comment below.
 GBP/USD. Preview of the new week. It will be difficult for the US dollar to continue strengthening against the pound
Forward 
Backward 