Gold is trading in the green at the 1,819.93 level at the time of writing. It could approach new highs if the US dollar continues to depreciate versus its rivals. Gold has taken out strong resistance levels, so an upside continuation is in cards.

The price of gold has taken advantage of this situation and now it seems strong enough to extend its upward movement. However, the DXY's retreat could only be temporary. The Non-Farm Employment Change was reported at 531K versus 455K expected, while the Unemployment Rate dropped from 4.8% to 4.6%, below 4.7% expected.

Today, Jerome Powell's remarks at an online conference hosted by the Federal Reserve Board could bring some volatility. 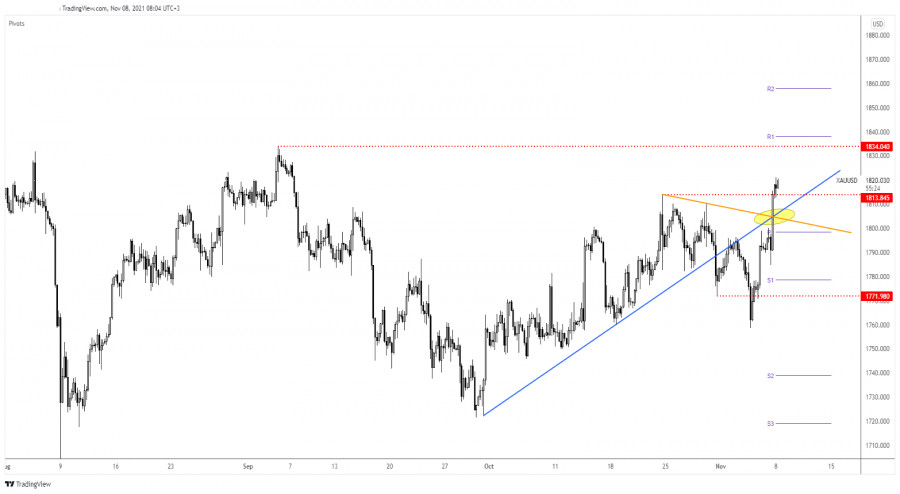 Gold registered an aggressive breakout through the confluence area formed at the intersection between the uptrend line and the downtrend line and now it stands above 1,813.84 former high.

As I've told you in my previous analysis, XAU/USD could reach 1,834.04 if it stabilizes above 1,813. In the short term, after its current rally, we cannot exclude a temporary retreat. Gold could come back to test the immediate support levels.

XAU/USD could climb higher if it confirms its breakout above 1,813.84. Testing this level could bring long opportunities. The first upside obstacle is represented by the 1,834.04 level.

A broader upward movement could be confirmed only by a valid breakout through this major resistance.