Although the pound showed some activity yesterday, it was in fact marking time. And it cannot be said that the empty macroeconomic calendar is to blame. Everything was exactly like that during the European trading session, but at the opening of the US one, data on applications for unemployment benefits were published. However, they turned out to be not just not what they expected, but rather multidirectional. Moreover, it is generally difficult to draw at least some conclusions. It all started with a downward revision of previous data on applications for unemployment benefits. As it turns out, the number of initial applications was revised from 267,000 to 269,000. The number of repeated applications increased from 2,160,000 to 2,209,000. In other words, last week's results were slightly worse than the market thought. Nevertheless, the final data pleased market participants. Although the number of initial calls decreased to 268,000, instead of the predicted 26,000. It turns out that, taking into account the revision, their number decreased by only 1,000, although they expected a decrease by 4,000 the number decreased to 2,080,000, instead of 2,140,000. That is, instead of decreasing by 20,000, it decreased by 129,000. 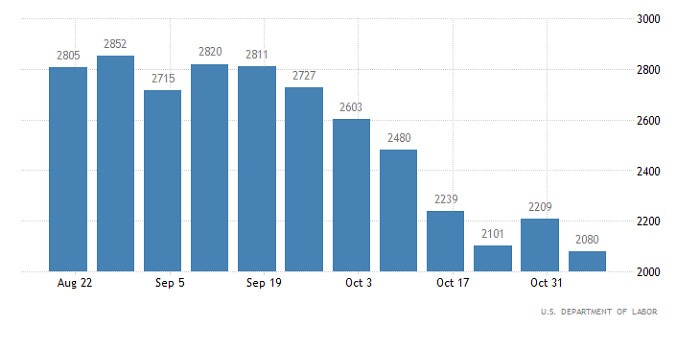 Nevertheless, today the pound has extremely poor prospects. It's all about retail sales, the rate of decline of which may accelerate from -1.3% to -1.6%. And the point is that not only are we talking about a decline in sales, the worst thing is that, for obvious reasons, last year there was a strong drawdown in terms of consumer activity, and accordingly, sales should have been gradually recovering this year. But apparently nothing of the kind is happening. Sales continue to decline. It turns out that even if the British economy is recovering, it does so in a strange way. Although the unemployment rate is incredibly low and continues to decline. That is, oly consumer activity should have grown. There were no and no answers to these questions. This situation is naturally worrisome, and is likely to become a reason for further weakening of the pound.

The GBPUSD currency pair has slowed down the buildup of the correctional movement within the value of 1.3512. The upward cycle was replaced by a horizontal channel within the boundaries of 1.3465/1.3510.

The technical instrument RSI touched the line 70 twice in the hourly period, which signals that the pound is overbought. Subsequently, the indicator dropped to level 50, where it confirmed the stagnation in the market.

There is no change in trading interests on the daily chart. Medium-term trend, still downward from early June.

The horizontal channel of 1.3465/1.3510 will delay speculators for a while, this will lead to an accumulation of trading forces, which, as a result, will cause an acceleration in the market. Trading tactics consider the method of breaking through one or another border of the established range. This may indicate the subsequent path of the quote.

Complex indicator analysis has a variable signal based on short-term and intraday periods in view of the sideways price movement.