How to trade EUR/USD on November 11. Simple trading tips for beginners. USD rises considerably as US inflation accelerates. 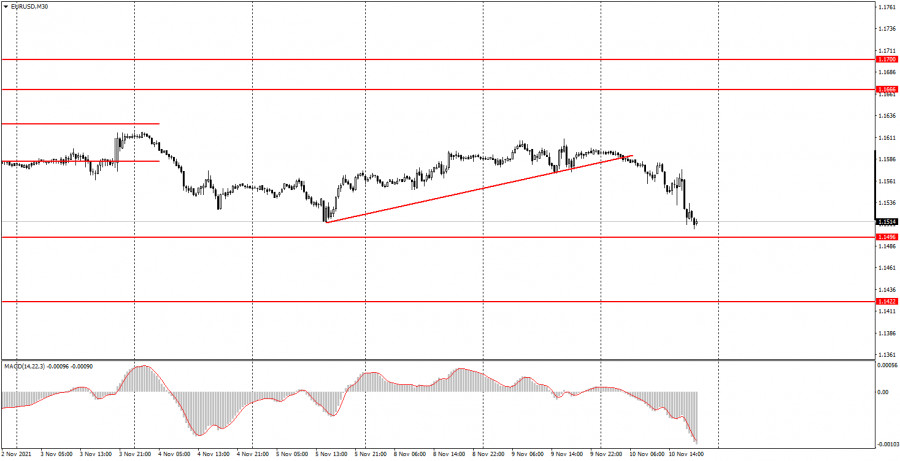 EUR/USD faced a steep decline on Wednesday. The downward movement started at night, and there is a reason for this. A key report on US inflation was expected on Wednesday, being the only important event of the day. In addition, all market participants are now focused on inflation data as it is a crucial indicator for the American economy and financial markets. Thus, when it turned out that the consumer price index rose to 6.2% in October, while the reading was estimated to stand at 5.8%, the US currency began to rise. Actually, the dollar continued its growth that was initiated earlier at night. We assume that traders predicted such a high inflation rate and started buying up the greenback in advance. Thus, the euro/dollar pair has once again approached the level of 1.1496 and retested its yearly lows. 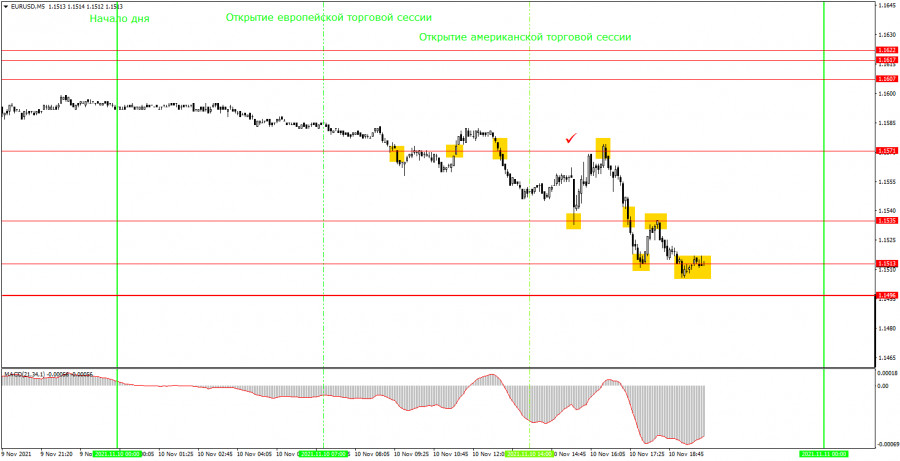 On the 5 minute time frame, the pair's movement was pretty smooth, especially during the American trading session. However, it was still better to skip most of the signals as they turned out to be false or too risky. Let's discuss possible trading strategies you could have used today. In the course of the European trading session, three signals were formed around the level of 1.1571. First, the price consolidated below it (a sell signal), then above it (a buy signal) and then it went lower again (a sell signal). Since in the first two cases the price did not even pass 10 pips in the right direction, both signals were considered false. The signals brought a loss of 24 pips. The third signal formed in the European session should not have been used, just as all other signals around the level of 1.1571. Then, the first buy signal was formed near the level of 1.1535during the US trading hours. It was formed exactly at the time when the inflation report was published. Therefore, you should have ignored this signal as it was too risky. After that, the signals around the 1.1535 and 1.1513 levels were formed. The price bounced off these levels three times, which allowed novice traders to open three trades at once. Each of them brought traders a small profit since the distance between these levels was only 22 pips. So, beginners could have earned about 30 pips which helped offset morning losses. The last signal was formed too late and should not have been followed.

On the 30-minute timeframe, the pair quickly consolidated below the trendline, so the uptrend reversed without even starting. At the moment, the quotes have dropped to the level of 1.1496 and may continue to fall. However, today's downtrend was caused mainly by strong statistics, while tomorrow the situation will be different. Therefore, the decline may not necessarily continue. On the 5-minute time frame, the key levels for November 11 are located at 1.1496, 1.1513, 1.1535, and 1.1571. As usual, Take Profit should be set at the distance of 30-40 pips, while Stop Loss should be placed to a breakeven point as soon as the price passes 15 pips in the right direction. On the M5 chart, the nearest level could serve as a target unless it is located too close or too far away. If it is, then you should act according to the situation or trade with a Take Profit. On Thursday, beginning traders will have nothing to focus on since neither the US nor the EU will publish any macroeconomic report. Also, no important fundamental events are expected tomorrow.