How to trade EUR/USD on November 12. Simple trading tips for beginners. Lackluster trading on Thursday with USD still retaining 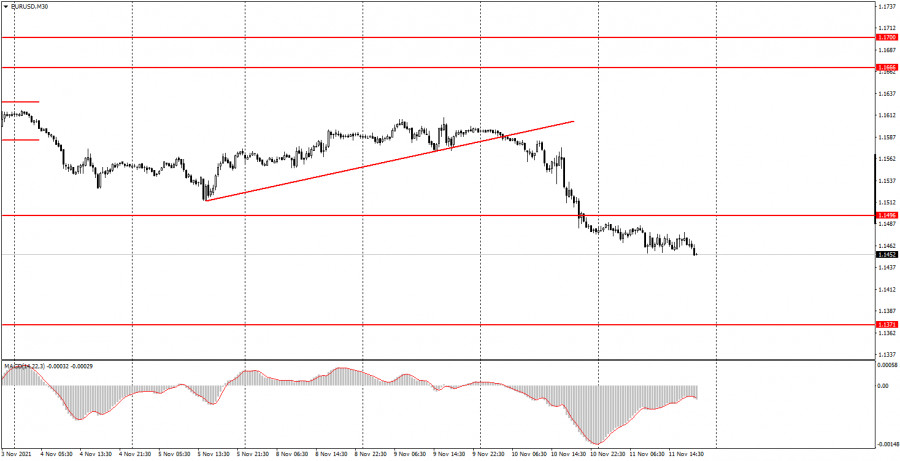 On Thursday, the EUR/USD pair was trading as usual, with daily volatility of just over 30 pips. Besides, a full-fledged flat movement was observed throughout the day. In the evening, the bearish pressure on the pair resumed, resulting in a slight decline or, rather, the continuation of the downward movement. Formally, the pair is moving downwards at the moment after breaking through the ascending line. However, this trend does not even have two pivot points to form its own trendline. Thus, the trend is very difficult to trade with, especially for beginners who usually work with the most simple analysis tools. Anyway, the US dollar continues to strengthen after yesterday's report on US inflation which rose to 6.2% on a yearly basis. Today, no important fundamental news or economic releases have been published either in the US or the EU. This partly explains such weak volatility. 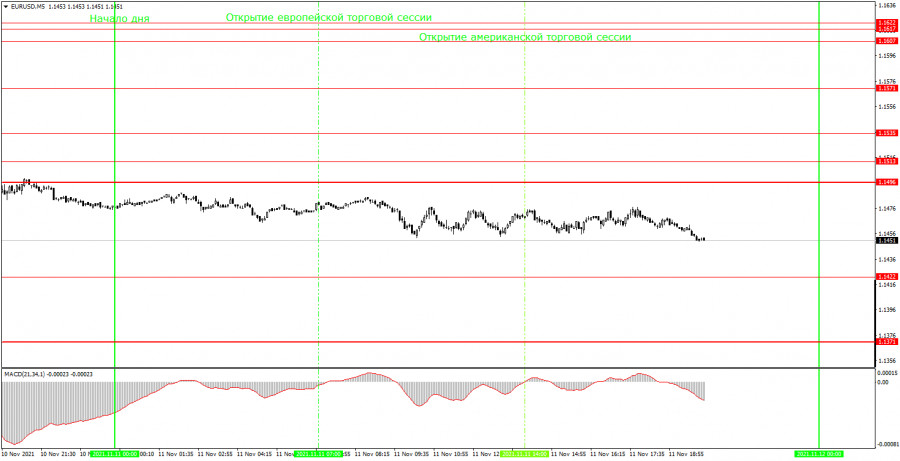 On the 5-minute time frame, there was hardly any movement on Thursday. Although the market stabilized later in the afternoon, there was a clear sideways movement most of the day with minimum volatility of less than 30 pips. Moreover, the price did not even approach the levels at which a trading signal could have been formed. This is partly because few levels can be seen near these price values. The price has not been at such low levels for more than 10 months. So, the illustration depicts mostly strong levels but almost does not show the weak ones which in most cases represent the lows and highs of the day. The quotes also failed to reach the nearest level of 1.1422. So, today turned out to be an unplanned day off for traders.

On the 30-minute time frame, the pair continues to move down although the MACD indicator is pointing upwards. This is another disadvantage of such a movement that we have observed lately. In other words, the movement is so weak that the MACD indicator does not react to it. Today, quotes have passed a little more than 30 pips. This is a very small distance even for the euro/dollar pair. However, the movement may continue with the target of 1.1371. On the 5-minute time frame, the key levels for November 12 are located at 1.1371, 1.1422, 1.1496, 1.1513, and 1.1535. Take Profit should be set at a distance of 30-40 points. Stop Loss should be placed to a breakeven point as soon as the price passes 15 pips in the right direction. . On the M5 chart, the nearest level could serve as a target unless it is located too close or too far away. If it is, then you should act according to the situation or trade with a Take Profit. On Friday, beginners will again have nothing to pay their attention to, since neither the US nor the EU will publish any important macroeconomic reports. In theory, the consumer sentiment index from the University of Michigan can affect the market sentiment, but the likelihood is low.